'Racist, or, at Best, Unfathomably Stupid.' Britons Finding it Hard to Swallow Campaign to Curb Knife Crime With Ads on Fried Chicken Boxes

A resident walks past a fast food shop in the town of Tilbury in Essex, east of London on August 26, 2017.
DANIEL LEAL-OLIVAS—AFP/Getty Images
By Julia Webster

The latest attempt by the British government to tackle a rise in knife attacks among young people has been widely criticized as ineffective and racially-insensitive.

The U.K. Home Office — the government department responsible for security and law enforcement — launched a campaign earlier this month that saw takeout boxes distributed to fried chicken fast food restaurants branded with “#KnifeFree” slogans in an effort to dissuade young people from carrying weapons. The effort has been viewed by many, however, as perpetuating negative stereotypes of minority British and immigrant communities: that they are disproportionately caught up in violence, and that they primarily eat junk food.

“We are rolling out our #KnifeFree chicken boxes in over 210 chicken shops in England and Wales,” the Home Office tweeted on Aug. 14: “They use real life stories to show people how they can go #KnifeFree.”

Kit Malthouse, a top government official in charge of crime, said: “These chicken boxes will bring home to thousands of young people the tragic consequences of carrying a knife and challenge the idea that it makes you safer.”

According to British newspaper the Guardian, the government spent more than £57,000 ($69,000) on distributing the 321,000 chicken boxes. The managing director of Morley’s, one of the chicken shop chains involved in the rollout, told the BBC he was “proud” of the initiative.

But the reaction from many other Brits much less positive, with words like “offensive”, “racist” and “stupid” used to describe the campaign. “Is this some kind of joke?!” David Lammy, a Labour Member of Parliament from London, said in a tweet. “Why have you chosen chicken shops? What’s next, #KnifeFree watermelons?”

He later told the Guardian: “Boris Johnson has already called black people ‘piccaninnies with watermelon smiles’. Now his government is pushing the stereotype that black people love fried chicken. This ridiculous stunt is either explicitly racist or, at best, unfathomably stupid.”

Diane Abbott, the Labour party’s top advocate on security and the country’s first black woman to become a Member of Parliament, also criticized the “crude, offensive” campaign, tweeting that Johnson’s government “would do better to invest in our communities [than] demonize them.”

Shops on West Green Road, which has been named the 'Unhealthiest' in London on November 02, 2018 in London, England.
Dan Kitwood—Getty Images

The reaction has not just been online. Last weekend, two young Londoners launched a counter-campaign in an attempt to combat the stereotypes that the U.K. government’s campaign. Hayel Wartemberg, who co-founded the online broadcaster Word On the Curb with his business partner Ndubuisi Uchea, said the #knifefree campaign was “quite racially insensitive and inflammatory.”

“We were so astonished at first that we thought it was a parody, but then we realized that it was actually very serious.”

With a hashtag of their own — #ThinkInsideTheBox — they set up shop (with a chicken costume, no less) outside a Westfield shopping center in East London, asking members of the public for more relevant advice, both to combat knife violence and for the British government.

“Invest in education rather than stereotyping minorities,” the message on one box read. “Why should those living in wealth decide how those who are struggling live?” Another suggested a greater focus on community mentors, and “interest free loans for at-risk youth.”

The Home Office’s campaign represents an “antiquated stereotype,” Wartemberg explains, and “the assumption is that young people who commit crime are predominantly black or Asian and where do they like to hang out? They like to hang out in fried chicken establishments.”

“Not only is it specifically incorrect to assume that the majority of crime is perpetrated by people of that demographic, it’s also an unreasonable assumption that young people who carry a knife would on a whim decide to give up their knife based on going to a chicken shop and reading a story which tells them to do otherwise,” he tells TIME. “It’s lazy, it’s condescending and it’s absolutely based on archaic ideas about particular ethnic groups.”

“Everyone was talking about it and giving solutions and how they would provide alternative campaigns that would have a more positive impact. So we thought why don’t we return these solutions in the chicken boxes?” said Uchea.

Knife attacks in England and Wales have been rising steadily since 2014, with police recording nearly 40,000 offenses involving a knife or sharp instrument last year. The number of homicides committed by knife reached its highest level since records began in 1946, with 285 killings in the year ending March 2018. In April, the British Home Secretary Sajid Javid called youth violence, particularly knife crime, a “national emergency”.

In 2017, two thirds of those charged with knife possession offenses in London under the age of 25 were people of color, though many campaigners argue these figures reflect a historic pattern of over-policing black, South Asian and other minority ethnic communities, particularly in London. (In England and Wales as a whole, the percentage was less than 40%.)

A second counter-campaign, which is currently being crowd-funded, seeks to print chicken boxes with information on how young people can respond to controversial stop and search policing strategies, and “help people being unfairly targeted.” As the crowd-funding page explains, the boxes “aim to bring back the focus of violence in our society back onto the worst perpetrators of it, the state, and contextualize knife crime under the political framework under which it exists.”

Fried chicken shops — primarily takeout fast food venues — have become ubiquitous on British high streets and shopping districts, particularly in less affluent urban areas. The London Borough of Newham, one of the three most deprived boroughs in London, has over 258 fast food takeout restaurants, of which over a quarter are fried chicken shops. As the name suggests, they serve chicken, alongside the expected lineup of fast food options – fries, burgers, pizza and kebabs. Most use halal meat, in order to appeal to diverse communities.

Increasingly, they are seen as places for socializing as well as snacking, and where communities are built around food. During lunch hours and the after-school commute they are inundated with schoolchildren, and in the evening families and friends enjoy the cheap, convenient meal options. They also attract crowds of young people later in the night after nightclubs and bars close.

On Tuesday, Wartemberg and Uchea gave their boxes to government representatives at the Home Office. “We wanted to address an issue of national concern because it’s close to our hearts and because the campaign that was currently addressing it was insensitive,” said Wartemberg.

While not addressing the counter-campaign directly, a Home Office spokesperson tells TIME in response to a request for comment: “Part of our work to steer young people away from serious violence is by communicating with them directly through our national #KnifeFree campaign. Advertising in chicken shops is one element of this multimedia campaign, and was rolled out nationally following a successful pilot. Initial research by the media agency ACMS showed nearly 70% of chicken shop customers are aged between 16-24 — the group we need to communicate with.” 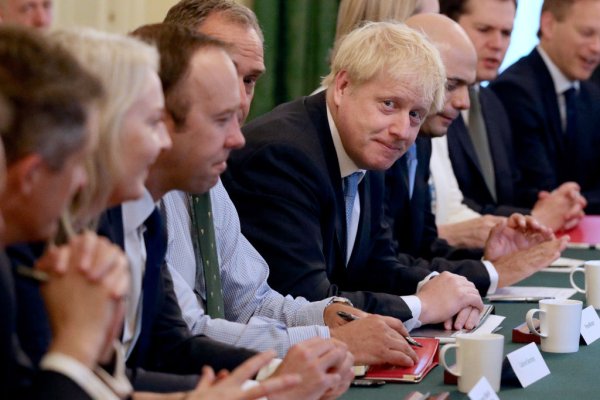 Who's Who in Boris Johnson's Top Team? A Guide to Who's Running the U.K. Now
Next Up: Editor's Pick