An adorable photo of some very, very good service dogs catching a production of “Billy Elliot” has captured the heart of the internet.

The photo was taken at a Canadian theater as part of the Stratford Festival in Ontario last week and while the dogs may all be theater buffs, they were at the matinee for a very good reason. They were practicing for the day their handler might want to take in a Broadway show over their own. “It’s important to prepare the dogs for any activity the handler may like to attend,“ Laura Mackenzie, owner and head trainer at K-9 Country Inn Working Service Dogs told CBC radio. Mackenzie had organized the dogs’ field trip to the theater as part of a training method that lets the four-legged attendees get used to the new setting so they can best help their handlers in the future and know what behavior is expected of them.

The well-behaved pups took part in one of the theater’s more “relaxed performance,” which was designed for attendees with autism or others who benefit a calmer experience or benefit from a show where they can move or make noise as necessary at the theater. The inclusion-minded venue also offers shows for theater lovers with hearing or visual impairments.

The dogs sat patiently through the show, got out of their seats at intermission, and returned in time to catch the second half, just like a human would at the theater. No word on whether they will start stocking dog biscuits to serve at intermission, but it’s clear the dogs all deserve a treat. According to a Stratford Festival spokesperson, who spoke to the CBC about the very good dogs, “They were all extremely well-behaved.”

After the festival tweeted out a photo of the pooches, mostly golden retrievers and poodles, attentively watching the screen and resting their heads on the seats in front of them, the image (rightfully) went viral. Even actor Mark Hamill weighed in, poking fun at Cats and suggesting that dogs deserve their own musical.

Mackenzie told CBC that the pups were “fantastic and remained relaxed throughout the performance” and “some even watched through the cracks of the seats.“ She hopes to bring in another group of trainee dogs soon. 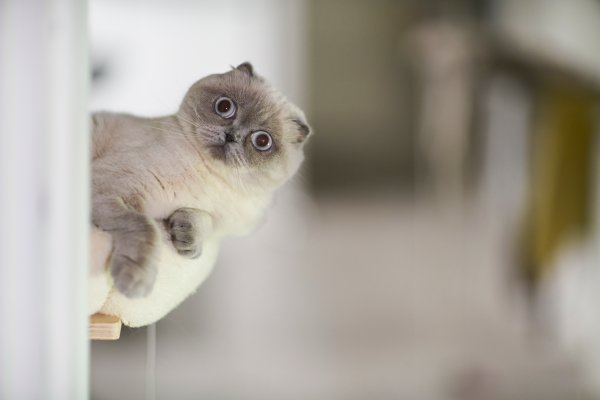 The Hypnotic Video of the 'Very Chill' Mr. Sandman Cat Has Already Made Him an Internet Legend
Next Up: Editor's Pick