Some top aides to President Donald Trump sought for months for a way to give states the power to block undocumented immigrant children from enrolling in public schools — all part of the administration’s efforts to stem illegal crossings at the southern U.S. border.

Trump senior adviser Stephen Miller had been a driving force behind the effort as early as 2017, pressing cabinet officials and members of the White House Domestic Policy Council repeatedly to devise a way to limit enrollment, according to several people familiar with the matter. The push was part of a menu of ideas on immigration that could be carried out without congressional approval.

Ultimately, they abandoned the idea after being told repeatedly that any such effort ran afoul of a 1982 Supreme Court case guaranteeing access to public schools. But the consideration of denying hundreds of thousands of children access to education illustrates the breadth of the White House’s push to crack down on undocumented immigrants.

The strategy echoed the aim of a new rule the administration announced earlier this week that could block immigrants from becoming legal permanent residents if they’ve used government benefits. Any immigrant who had used Medicaid, public housing assistance or food stamps for more than 12 months over a 36-month period can be denied permanent resident status under the new rule.

The so-called public charge rule has sparked outrage among Democrats, who say it’s cruel. They have criticized Trump on a range of immigration policies, including a plan he announced last month to force Central American migrants to file for asylum in Guatemala instead of the U.S., a measure advocacy groups said would put their lives at risk. The debate over immigration is all but certain to play a central role in the 2020 elections.

A senior administration official, who requested anonymity when asked to comment on the story, dismissed accounts of Miller’s initiative as gossip from disgruntled bureaucrats but declined to identify any specific inaccuracy. The official also said undocumented immigrants placed an enormous strain on social services, including school districts.

Starting in late 2017, Miller pressed hard to find a way to limit undocumented immigrants’ access to public services, including education, according to the people.

That effort included consideration last year of a guidance memo issued by the Education Department that would tell states they had the option to refuse students with an undocumented status to attend public schools from kindergarten through high school. A memo was never issued.

The White House’s push was dropped because members of the administration determined the plan could violate Plyler v. Doe, a 1982 Supreme Court case that prohibited states from denying free public education based on their immigration status.

The court, in a 5-4 ruling, said that denying migrant children an education would “foreclose any realistic possibility that they will contribute in even the smallest way to the progress of our nation” and that punishing them for their parents’ actions “does not comport with fundamental conceptions of justice.”

“Such a radical policy change would be unlawful, unacceptable and un-American,” said Frank Sharry, who runs the immigration advocacy group America’s Voice. “The notion that we should punish little kids who go to school and pledge allegiance to our flag because Trump and Miller want to make America white again is incredibly cruel, dark and sinister.”

The president in May said he was concerned that abuse of the asylum system “strains our public school systems” and used funds that should go to American citizens.

“We’re using the funds that should be going to them,” Trump said. “And that shouldn’t happen. And it’s not going to happen in a very short period of time.”

During the presidency of Barack Obama, immigration rights groups raised concern about that schools systems were making it too hard for children to enroll by imposing rigid documentation requirements. In response, the administration issued guidance to school administrators to be more flexible in the documents they accept.

The 2014 guidance said schools should accept utility bills or leases as substitute proof of residency after reports that some districts were demanding driver’s licenses or Social Security cards that could be unattainable for those in the country illegally.

“Public school districts have an obligation to enroll students regardless of immigration status and without discrimination on the basis of race, color, or national origin,” then-Attorney General Eric Holder said in a statement at the time.

Congress also attempted to pass legislation in 1996 that would have allowed states to block public education benefits to undocumented children or charge tuition, but the effort failed when former President Bill Clinton threatened to veto the bill.

Around 725,000 kindergarten through 12th-grade students in U.S. public and private schools in 2014 were unauthorized to be in the country, according to a study by the Pew Research Center. That amounts to about 1.3% of total school enrollment.

The U.S. Census bureau said earlier this year that the cost spent by per pupil on elementary and secondary education was $12,201 annually, meaning spending on undocumented migrant students could exceed $8 billion annually. 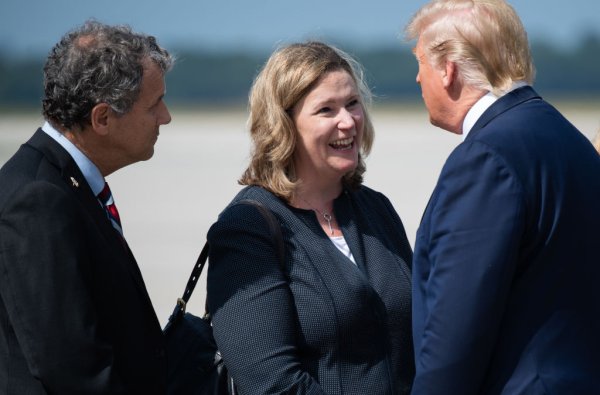