The Trump Administration Just Backed the Sale of F-16 Fighters to Taiwan. China Won't Be Happy

(Bloomberg) –– The Trump administration has informally told Congress that it supports a potential sale of F-16 fighter jets to Taiwan, a move that will likely anger China at a key moment in trade talks with the U.S.

The State Department has informally told key House and Senate committees that it supports the $8 billion sale of 66 F-16s, according to two congressional aides with knowledge of the decision. Even with Congressional support, it will be years before any of the Lockheed Martin Corp. jets are delivered, assuming Taiwan signs an actual contract.

It’s unclear whether the administration’s support for the sale will be used as a bargaining chip in the still-fluid trade talks with Beijing or whether it represents additional support for a government long seen as a bulwark against Chinese expansion in the Asia-Pacific region. China has long protested U.S. arms sales to Taiwan, which it views as part of its territory.

The U.S., wary of antagonizing China, hasn’t sold advanced fighter jets since then-President George H.W. Bush announced the sale of 150 F-16s to Taiwan in 1992. The Obama administration rejected a similar Taiwanese request for new jets, agreeing in 2011 to upgrade the island’s existing fleet.

President Donald Trump on Thursday said he planned to speak with Chinese President Xi Jinping “soon.” The U.S. has a new round of tariffs scheduled to go into effect on Chinese imports Sept. 1, a move authorities in Beijing has warned will spark a retaliatory response.

Normally, the informal 30-day notification process to Congress that started Thursday night would be followed by a formal, publicly released notification to congressional committees that lawmakers have another 30 days to approve or disapprove. A U.S. official said the formal notification is likely to occur sooner, however.

After that it could take months or years before Taiwan and the U.S. actually ink a contact and possibly years after that before deliveries begin. The “Block 70” F-16s offered for sale are common to those sold to other U.S. allies.

The Taiwan F-16s, however, would be equipped with top-line fire control radar made by Northrop Grumman Corp. that would allow precision-guided munitions to be fired at greater distances, said an official familiar with the details. 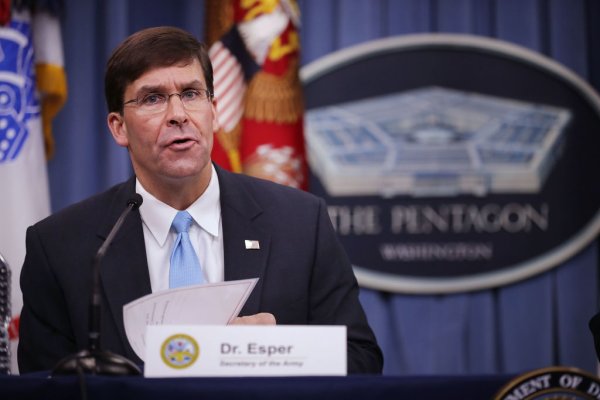 Mark Esper Confirmed As Defense Secretary
Next Up: Editor's Pick