On his way to an Aug. 1 campaign event in Ohio, President Donald Trump was asked about America’s position on the months-long pro-democracy protests in Hong Kong. “That’s between Hong Kong and that’s between China, because Hong Kong is a part of China,” Trump said. But as tensions mounted in the self-governing enclave in the following weeks, Trump’s aides and allies took different positions, with his State Department, National Security Advisor, and supporters in the Senate backing the protesters and warning Beijing against intervention.

The mixed messages left U.S. and foreign officials struggling with basic questions about American policy, such as to what extent the U.S. considers Hong Kong autonomous and how Washington might respond to the use of force to quell the demonstrations. More broadly, the confusion captures an enduring challenge of the Trump presidency: it’s almost impossible to discern America’s approach to key foreign issues, from trade to humanitarian crises to military deployments, because the process for setting and enforcing policy is ignored or irrelevant.

In interviews with TIME, more than a dozen current and former U.S. officials in the White House, the State and Defense Departments, and the intelligence community said the lack of clarity on Hong Kong reflects a muddled approach not just to that crisis but to policy­making across the national-security bureaucracy. And while some have found Trump’s unpredictability refreshing, it has left America’s closest allies wondering whether the U.S. will honor treaties, re-evaluating their relations with adversaries like Russia and China, and planning for what a second Trump term might bring.

The President’s penchant for ad hoc policy­making has spread across government, these officials say. National Security Advisor John Bolton has dispensed with most of the inter­agency meetings that have allowed top officials in previous Republican and Democratic Administrations to present and debate the risks and benefits of different policy options, according to four current and former National Security Council officials.

As a result, said two of the officials, there is less—and sometimes no—coordination among Cabinet departments. Some policies are decided without input from diplomatic, political or military experts. Bolton’s top aides have called counterparts to ask if they know what was discussed or decided in certain meetings, only to be told, “We don’t know either,” according to one Administration official. A National Security Council official declined to comment on the record.

The top-down pattern also has been adopted by Secretary of State Mike Pompeo, State Department officials say. Pompeo meets with some top political appointees only every other week, according to two current and one former Department officials. When Colin Powell was Secretary of State during President George W. Bush’s first term, he met with his under and assistant secretaries every morning, those officials said.

In a July 25 closed-door meeting with the Business Council for International Understanding, according to two people in attendance, Under Secretary of State for Management Brian Bulatao, a West Point classmate of Pompeo’s, said that because Pompeo was away from the building 80% of the time, he was streamlining the management of the department by slashing the number of officials who report to him. Deputy Secretary of State John Sullivan, Bulatao said, was taking responsibility for finance; public diplomacy and public affairs; and civilian security, democracy and human rights. “That means only about half the department has regular access to the secretary,” said one of the attendees, a former department official. That has left some officials in the dark about what issues are at the top of Pompeo’s agenda at any given time and what other parts of the department are doing.

The lack of orderly policy processes across government is what has led to the confusion on Hong Kong, insiders say. Commerce Secretary Wilbur Ross told CNBC on Aug. 14 that the dispute “is an internal matter.” The same day, Pompeo’s State Department said it was “deeply concerned” by reports that China’s People’s Armed Police were mobilizing in nearby Shenzhen. “We condemn violence and urge all sides to exercise restraint, but remain staunch in our support for freedom of expression and freedom of peaceful assembly in Hong Kong,” the statement said.

Bolton also took a harder line than Ross, warning the Chinese in an Aug. 15 interview that they “have to look very carefully at the steps they take because people in America remember Tiananmen Square”—a reference to the 1989 demonstrations that were brutally crushed. “We urge all sides to remain calm and for the HK government to peacefully address the situation. The United States expects that Beijing will uphold its commitments in the Sino-British Joint Declaration,” a senior Administration official said in an email to TIME Aug. 19. “Preserving HK’s autonomy as agreed to by China is in everyone’s best interest.”

It was as close as the Trump team has come to embracing America’s longstanding position on Hong Kong. But it was just one voice among many in the unpredictable Trump administration this summer. 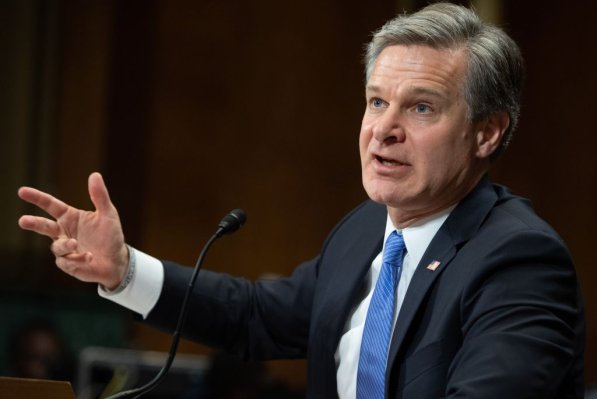 China Trying to 'Steal Their Way' to Dominance: FBI Director
Next Up: Editor's Pick