'You Either Value Us Equally... or You Don't.' Megan Rapinoe Criticizes U.S. Soccer After Pay Talks Break Down

The players of the U.S. Women’s National Soccer team may have to take their equal pay case to trial after negotiations between the team and U.S. Soccer broke down this week.

“From a social perspective, from leaving the game in a better place, for women everywhere, if it’s not equal, then there’s no deal that we can get to,” Megan Rapinoe, the top player from 2019 Women’s World Cup, said on NBC’s Today show Thursday. “This isn’t bargaining. You either value us equally and show that, or you don’t.”

Earlier this year, 28 members of the World Cup-winning USWNT—including stars Alex Morgan and Rapinoe—filed a lawsuit against U.S. Soccer, claiming they had not received compensation or treatment that equalled that of the less-successful men’s team. Representatives for the team and U.S. Soccer agreed to meet in New York this week to discuss pay, but those negotiations appear to have ground to a halt—leaving open the possibility of a legal battle in federal court.

“We entered this week’s mediation with representatives of USSF full of hope,” Molly Levinson, a spokesperson for the players, said in a statement on Wednesday. “Today we must conclude these meetings sorely disappointed in the federation’s determination to perpetuate fundamentally discriminatory workplace conditions and behavior.”

U.S. Soccer, however, disputed that account, calling Levinson’s statement “inflammatory,” according to CNN. “We have said numerous times that our goal is to find a resolution, and during mediation we had hoped we would be able to address the issues in a respectful manner and reach an agreement,” the organization said in a statement.

TIME could not immediately reach U.S. Soccer for further comment.

U.S. Soccer last month claimed that the women’s team has been paid more than the men’s team, citing $34.1 million in salary and game bonuses paid to female players from 2010 to 2018, compared to $26.4 million paid to male players. While those figures do not include benefits provided to female players, such as health care, they also do not account for differing pay structures between the two teams. For example, while USWNT players receive a base salary, male players’ compensation depends on games and performance.

Compensation models included in the USWNT’s lawsuit argue that, if both teams won 20 games in a row, the women would be paid 38% less than their male counterparts.

USWNT players, fans and sponsors have been vocal in their fight for equal pay. Christen Press, who appeared on ABC’s Good Morning America Thursday with Rapinoe, said the team is willing to continue the battle in court, if that’s what it takes. 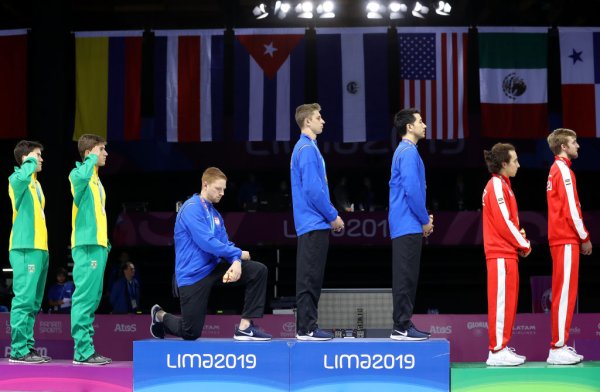 U.S. Athletes Protest at Pan-Am Games in Peru
Next Up: Editor's Pick