Flights at Hong Kong International Airport mostly resumed on Wednesday morning, after violent clashes broke out between demonstrators and police on Tuesday night.

“We are trying to clear the backlog of passengers through flight rescheduling,” an Airport Authority representative told TIME. Around 50 flights remain cancelled according to the airport’s web site.

The partial resumption of operations follows several days of anti-government protests that culminated in the cancellation of hundreds of inbound and outbound flights at one of the world’s busiest aviation hubs.

A court order has been made ordering protesters to restrict future actions to designated areas, local media reports say. It is not yet clear if protesters plan to reassemble at the airport, but the Airport Authority announced measures on Wednesday that would make future large-scale protests more difficult. Only ticketed passengers will be allowed into the terminal buildings starting on Wednesday afternoon, according to a statement issued by the Airport Authority. Trains to the airport will also run at less frequent intervals than normal, and some car parks near the airport will be closed starting on Thursday.

Hundreds of flights were grounded on Monday after thousands of protesters invaded the airport terminal, blocking access to check-in desks and security and immigration checkpoints. Check-in services were suspended again late on Tuesday afternoon after protesters returned to the building. The city’s flagship carrier, Cathay Pacific, said that it had cancelled 272 flights on Monday and Tuesday, affecting more than 55,000 passengers, according to the South China Morning Post.

By Tuesday night, the demonstration took an ugly turn when protesters detained a man they believed to be an undercover Chinese police officer and another man who is reportedly a journalist for the Beijing-backed newspaper Global Times. Violent clashes with police broke out when officers arrived to assist the men, who were held for several hours.

In one video circulated online, protesters could be seen taking a baton from a police officer and using it to beat him. News video showed the officer drawing his weapon but no shots were fired.

Protesters “detained, harassed and assaulted a visitor and a journalist, inflicting physical and mental harm on them,” the police said in a statement.

Five people have been arrested for offenses including unlawful assembly, possession of offensive weapons, assaulting police officers and breaching of the peace, the police said. They added that two officers were injured and sent to the hospital.

Increasingly violent unrest has gripped Hong Kong since June. A series of peaceful marches against a now suspended bill that would have allowed extradition to China for the first time has spiraled into a wider campaign for political freedom. Many protesters are repudiating Chinese sovereignty and calling for self-determination for the former British colony.

What began as a peaceful weekend sit-in at the airport turned chaotic on Monday when thousands of people showed up at the terminal building to protest what they say was heavy handed police containment of protests in downtown Hong Kong on Sunday night.

Local media reports said that night police fired tear gas into confined spaces such as subway stations, and also opened fire on protesters with non-lethal projectiles at close range. A young woman was blinded in one eye when hit by a projectile that protesters accuse police of firing.

On Tuesday, the United Nations High Commissioner said through her spokesman that there was “credible evidence” of law enforcement officials in Hong Kong using some anti-riot measures “prohibited by international norms and standards.”

Beijing has meanwhile condemned the unrest, and on Wednesday Xu Luying, spokeswoman for the Hong Kong and Macau Affairs Office expressed “extreme anger” about Tuesday night’s events and “strongly condemned” the protesters’ actions calling them “nearly acts of terrorism,” reports the Post.

In the aftermath of Tuesday night’s chaos, apologies from some protesters began circulating in the same online forums where the protests were organized.

Hong Kong’s airport is one of the world’s busiest, with almost 73 million passengers annually. One aviation industry expert told local media that flight disruptions this week might cost the aviation industry $76 million in losses. 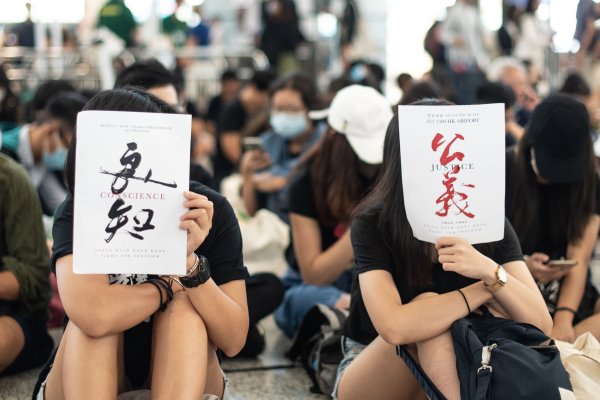 Flights Grounded as Protests Return to Hong Kong Airport
Next Up: Editor's Pick