'This Time It Has Really Exploded.' The Balloon Destroyer Says Things Really Got Popping Once He Pivoted to Balloons

On his social media feeds, Jan Hakon Erichsen identifies as a “visual artist and balloon destroyer,” the latter title a nod towards the viral fame he’s come to find on the Internet for his elaborate, violent and often humorous processes for popping balloons with elaborate constructions made with knives and other sharp objects.

Erichsen, who’s based in Oslo, Norway, has focused his creative practice on destruction for some time, but pivoted to focusing on doing it with balloons because it was a lighter mode of expression than what he had been using before.

“I´ve been making these short destruction videos for a little while now, but it started as something I just did for fun and shared with my real life friends,” he told TIME. “At some point, I discovered that the comic relief the balloons offered were a breakthrough in my art, which had been a little too serious and aggressive before.”

His decision to switch to balloons paid off; over the weekend, one of Erichsen’s videos (a 2-minute supercut of the many balloons he’s popped by extreme methods) went viral on Twitter, garnering over 92k retweets and over 323k likes, a high amount of engagement he hadn’t expected.

“It always comes as a little surprise when one of my videos is successful, and this time it has really exploded,” he said. “I thought it might be popular among my followers on Insta, but the amount of traction it gained on Twitter was a complete surprise.”

Erichsen considers his viral moment and the role of the artist in the age of the Internet “a revolution of sorts,” providing visibility and access to artists that was only available to a select few before.

“My videos are seen by millions and having a small show with a few hundred visitors doesn’t really make sense anymore,” he shared. “I imagine that for the new generation of artists this is just how things are and this will probably have a huge impact on art in general.” 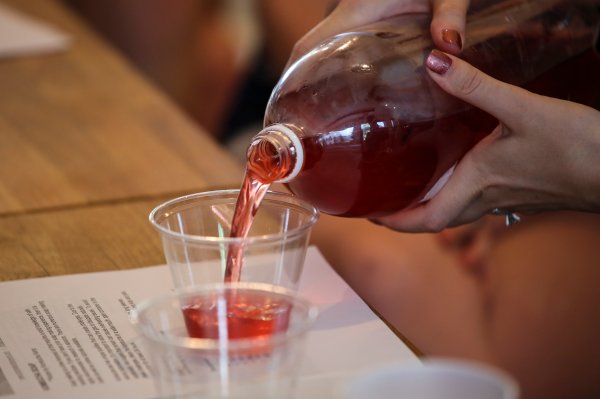 This Lady's Facial Expression Parade After Tasting Kombucha Is the Self-Discovery Meme We Need
Next Up: Editor's Pick