No, Video Games Don’t Cause Mass Shootings. But The Conversation Shouldn’t End There

Game enthusiasts and industry personnel arrive to the Los Angeles Convention Center ahead of the E3 Video Game Convention on June 10 in Los Angeles, California.
Christian Petersen—Getty Images
Ideas
By Simon Parkin
Parkin is a British journalist, a contributing writer for the New Yorker, and author of the forthcoming book, A Game of Birds and Wolves.

As night follows day, as prayers follow thoughts, so talk of video game violence follows a mass shooting, that most inevitable of American news stories. In a speech on Monday, President Trump responded to two such recent tragedies, one in Dayton, Ohio, one in El Paso, Texas by condemning “gruesome and grizzly video games that are now commonplace,” which, he argued, create a culture that “celebrates violence.”

For those who believe that North America’s mass shooting-epidemic can only be treated by more stringent gun controls it was a talking-point designed to distract from a solution staring the rest of the world in the face. For video game fans, many of whom have endured a lifetime of defending a hobby that is seen, at best, as a harmless waste of time or, at worst, unsightly onanism enjoyed by the socially bereft, it was the inevitable buckshot of political blame.

Thus cornered, the video game industry shot back with an unequivocal statement: “Blaming video games distracts from the broader issues at hand,” said Renee Gittins, executive director of the International Game Developers Association, the world’s largest advocacy organization for the industry. “There is an overwhelming amount of research that finds there is no evidence linking video games to violence. Video games do not cause violence.”

The studies Gittins cites are welcome but probably unnecessary. Hundreds of millions of video games are sold and played around the world every year. Billions of people play violent games every day without being inspired to replicate their on-screen actions in earnest. If video games caused mass shootings there would have been a massacre in every town from Delhi to Dubai. And yet, curiously, mass shootings are almost entirely limited to the country where assault rifles are sold in supermarkets. Video game violence is the effect, not the cause; it is the mirror, not the window.

If sense followed madness, this would be the end of it. Yet until the obvious cause of mass shootings is addressed (the ready availability of guns is the only reliable predictor of gun violence), the conversation about video games and murder must continue, seemingly, indefinitely in America.

The frustration of the situation, at least for any serious video game critic (that is, someone who hopes to interrogate, not merely advocate the medium they love) is that there are meaningful conversations to be had about video games and their relationship to particular kinds of violence. While many games encourage creativity, collaboration and social interaction, the industry has a clear and disproportionate obsession with virtual guns. Some of its best-known companies are known to have licensed the likenesses of real-world automatic weapons in the name of verisimilitude. No, video games do not cause mass shootings. But combine violent fantasies underpinned by expertly crafted compulsion loops designed to offer a potent escape from the responsibilities of life, and then set those games within the toxic context of web-based culture wars and you have created, as Trump argues, a perilous environment for a “troubled youth.”

Situating these discussions within the context of a mass-shooting, however, is unconstructive and, in Trump’s case, plainly disingenuous. It calculatingly turns the conversation away from the most pressing issues — gun control and the radicalization of young white men — while simultaneously shutting down more nuanced discussion about the thematic obsessions and aesthetics of gun-orientated video games. With a mass shooting every day of the year, is it any wonder that the American video game industry has become so entrenched in its defensive position that, seemingly, it has not allowed itself the space for more nuanced self-reflection?

Nuanced self-reflection is welcome following the attack on two mosques in Christchurch, New Zealand, in March. The murderer, Brenton Tarrant, live streamed the massacre from a helmet cam. The positioning of the camera gave the footage the precise appearance of a First-Person Shooter, a style of video game where the weapon nods front and centre-screen (the genre is colloquially known as the ‘shooter’, a term shared with the perpetrator of mass shootings). This reframed a depiction of earnest violence in the language of video game fictional violence. It made his actions somehow recognizable, positioning him as the protagonist in a world where every person he encountered was a legitimate target. The shooter’s aesthetic choice was considered and probably helped the footage spread virally among a young audience (a spokesperson for Facebook said the company removed 1.5 million videos containing footage of the shooting in the 24 hours following the incident).

Video games did not inspire the New Zealand shooter to murder 51 people in the name of white supremacy. They did, however, influence the manner in which he broadcast those murders, as well as other aesthetic choices. Tarrant had drawn, in white marker, numerous far-right slogans and references on the guns he used during the attack. The day after the shooting one Twitter user asked, jokingly, whether Tarrant’s weapon ‘skins’ would be available to download in the future. It was a reference to the fact that many competitive shooting games, including Call of Duty and Fortnite, allow players to customize their virtual weapons with artwork, like stickers or paint, applied to the gun. The ease with which a radicalized murderer was able to reference the visual language of video games while carrying out his murders should be enough to cause game developers to ponder their contextualization (or lack thereof) of their screen violence.

The video game industry could do more, too, to root out toxic behaviour within its communities. Companies such as Riot Games have developed tools that punish players who use racist or abusive language, but many video game message boards have become targets for those who seek to co-opt disaffected young men with a radical or violent agenda. Steve Bannon, founder of the right-wing media organization Breitbart News and former Trump advisor described video game players as “rootless white males” with “monster power” and viewed online message boards as hothouses for the alt-right.

8chan, the message board where both the Christchurch and El Paso shooters announced their killing sprees rose to prominence in 2014, in part as a place to discuss video game culture apart from the threat of moderation. The cliché that video games turn young men into violent sociopaths was scorned by the Christchurch killer who wrote, in the faux-earnest patois of the internet troll, that “Fortnite trained me to be a killer.” But the ideologically charged “gamer” identity creates an ‘us-versus-them’ mentality. As English football clubs discovered in the 1970s and 1980s, it’s relatively easy to steer young men who adopt a shared, confrontational group dynamic toward collective violence and racism.

Just as football fans were turned into hooligans by those who sought to co-opt and direct their disaffection, today recruiters target disaffected, vulnerable adolescent white males on web forums. “Those who exhibit curiosity about white nationalist talking points or express frustration with…feminists, anti-racism activists and “social justice warriors” are then escorted through a funnel of increasingly racist rhetoric,” wrote Megan Condis, a professor of communication at Texas Tech, in an op-ed for the New York Times. “[This is] designed to normalize the presence of white supremacist ideology and paraphernalia through the use of edgy humor and memes.” Some video game communities, in other words, have given risen to a new brand of digital hooliganism.

Video games do not cause mass shootings, but when mass shooters announce their plans and manifestos on video game-related message boards frequented by white nationalists, the industry may have something of a communities issue. Video games do not cause mass shootings, but when lonely individuals spend hours each day using digital replicas of commercial weapons to gun down digital replicas of human beings for digital rewards the industry may have something of an optics issue. As Constance Steinkuehler, former advisor on video games to Barack Obama’s White House once put it, “Video games are not a gun violence problem. But video games do have a PR problem.” Nevertheless, efforts to situate these discussions in the aftermath of a mass shooting, are in bad faith. It is an attempt to scapegoat one industry in order to absolve another, to force the endless publication of distracting stories, just like this one. 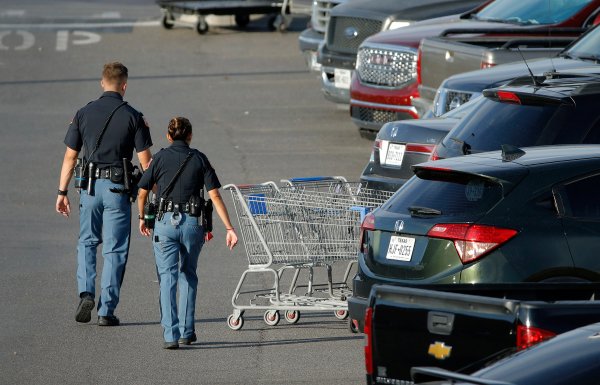 How To Stop White Supremacist Terrorism
Next Up: Editor's Pick