President Trump Wants a Weaker Dollar. But He Keeps Accidentally Pumping Up the Value

President Donald Trump is waging both a trade war and an emergency currency war. It will be hard for him to win both. He has complained that the value of the Euro and the Yen are too high compared to the dollar. He is seen at the G20 Summit in June 2019 with Japanese Prime Minister Shinzo Abe (left).
Kiyoshi Ota - Pool/Getty Images
By Anchalee Worrachate / Bloomberg

President Donald Trump’s intensifying battle with China and other major trading partners is morphing into a global currency war. It will be hard for him to win both.

Escalating trade tensions have supported the dollar this year. They’re now fueling a mammoth bond rally as investors seek out the safest assets, demanding the greenback to buy Treasuries. Foreign ownership of American government notes has swelled to record highs, pushing yields to the lowest since 2016 on 10-year notes, a benchmark for global borrowing.

Trump has repeatedly nagged the Federal Reserve to cut borrowing costs while complaining that the dollar is too strong. Should the Fed cut interest rates again, the monetary easing may actually shore up the U.S. economy, supporting the greenback. That may only add to Trump’s frustration. Options traders boosted wagers on a weaker yuan versus the dollar.

“Whether President Trump can win the trade war and the ‘FX war’ seems rather doubtful,” said Kit Juckes, a global strategist at Societe Generale SA in London. “If he wants a weaker dollar, he should want a stronger yuan and euro. Unfortunately for him, this trade rhetoric has had the opposite effect.”

The dollar has strengthened about 2.3% against the euro and 2.4% versus the onshore yuan this year and is holding near its 2019 high on a trade-weighted basis. Trump’s latest threat of more tariffs on Chinese goods helped push the yuan past a psychological threshold of 7, the level defended by the authorities in the past.

The yuan steadied on Thursday after the central bank set the daily fixing stronger than analysts expected, providing some reassurance to traders rattled by a tumultuous week in markets.

Options traders this week paid more to bet on the yuan falling over the next three months, according to currency-options prices.

The question now is whether Beijing will allow that to happen, and what the Republican president may do in response.

In the eyes of some analysts, further yuan weakness could raise the risk of currency intervention by the U.S. to weaken the dollar. It hasn’t taken that step since 2000, when it joined an international effort to support the euro.

Intervention carried out for more than a few weeks could backfire and become supportive of the dollar, according to an analysis by UBS Group AG. For it to work, U.S. growth and carry advantages must both be blunted while the growth outlook in China and Europe improves, UBS said. That’s not a scenario economists expect.

“The more likely outcome of the explicit currency war would be further extension of uncertainty, which ironically could prove to be dollar-positive if risk assets fear weaker growth and volatility pushes higher,” UBS strategists including Bhanu Baweja wrote in a note. It will also “shift rate differentials in the dollar’s favor, albeit with a lag” as other central banks respond with dovishness.

Chris Chapman, a portfolio manager at Manulife Asset Management, is keeping most of his non-dollar exposure hedged despite the fact that the market is expecting at least two more Fed rate cuts in 2019. The issue here is that other central banks are cutting rates and easing policy. China looks set to step up stimulus to revive growth, while the European Central Bank has flagged fresh monetary action for as early as September.

“The dollar could stay strong, as other central banks are also pursuing accommodative policy,” Chapman said. “The current market feels a little like there is a tug of war between what lower U.S. rates would do to the dollar versus the flight to safety flows.”

–With assistance from Michelle Jamrisko. 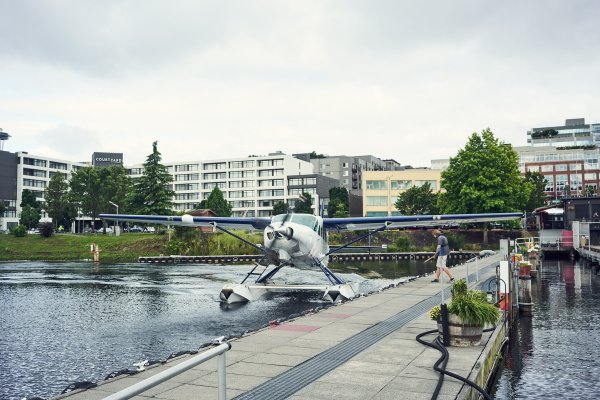 Immigration Policies Are Driving Away Skilled Workers to Canada
Next Up: Editor's Pick