Walmart employees pay their respects at a memorial outside the site of the El Paso mass shooting.
Callaghan O’Hare—Reuters
Ideas
By David French
French is a senior editor at The Dispatch and a columnist for Time. His new book is Divided We Fall: America's Secession Threat and How to Restore Our Nation. He is a former major in the United States Army Reserve.

In the immediate aftermath of the El Paso shooting, a raging argument broke out online and across the airwaves. Given that the suspected shooter used one of Donald Trump’s favorite words to describe illegal immigration–invasion–did that mean Trump actually inspired one of the worst mass killings in American history? And if his words inspired violence, can we blame other politicians on the left and the right when depraved killers repeat their slogans and messages?

It’s elementary to understand that the use of deliberately inflammatory rhetoric–especially in an angry, polarized era–can have terrible consequences. At the same time, however, arguments about specific politicians are much too simplistic. In fact, in the white-nationalist context, it actually understates the extent to which “alt-right” ideas and themes have infiltrated American discourse in ways that have energized a fringe movement and given it life and reach beyond the Oval Office.

In other words, our political world’s obsessive focus on Trump can blind our nation to a larger problem.

Radicals of all kinds don’t just seek to kill, threaten or harass. They also seek to influence, and the measure of their influence is the measure of their success. Jihadists, for example, seek to transform Muslim attitudes and theology. They seek to alter the very mind-set of the Islamic world, to make it implacably hostile to other faiths and to embrace an apocalyptic worldview.

The so-called alt-right seeks to fundamentally alter the American view of immigration, ethnicity and nationality. White nationalists view ethnicity as inseparable from culture, to such an extent that they claim immigrants from Latin America, Africa and Asia are simply incapable of assimilating into Western civilization, and that their inclusion will ultimately destroy America itself.

They argue that America is facing a “white genocide,” that a “great replacement” is under way. In their view, white Western culture faces extinction at the hands of black and brown immigrants, a class of people who are typically cast as sick, dirty and violent, compared to the white guardians of Western civilization.

So, yes, the “alt-right” was thrilled by Trump’s campaign rhetoric, and it barraged Trump critics with threats and harassment. But its influence extended well beyond online trolling and real-world intimidation. Steve Bannon, Trump’s campaign CEO, called the website he ran, Breitbart .com, the “platform for the alt right.” At its height in 2016 and early 2017, Breitbart was one of the most influential websites on the right, frequently ranking second in web traffic only to Fox News.

Breitbart relentlessly pushed “alt-right” themes into the national discourse. At one point, it had a “black crime” tag on its site, and it published an extensive “guide” to the so-called alt-right that miscast it as “young, creative and eager to commit secular heresies.” “Alt-right” words like cuckservative or cuck entered the lexicon. The term refers to pornography in which white men watch black men have sex with their wives.

As Breitbart’s traffic declined following the departure of Bannon, other right-wing sites picked up the torch. Even now, you’ll find constant attacks on the “cucks” who dissent from Trump’s presidency or policies. Just last month, a Trumpist website called American Greatness published a poem called a “Cuck Elegy,” aimed at me, that refers to immigrants as “parasites.” Influential and respected conservatives write for that site.

Over the past few years, “alt-right” themes have also spread to Fox News, which has hosted guests who’ve spread hysterical falsehoods about immigrants, including the pure fiction that they could introduce smallpox–a disease that was eradicated decades ago–into the U.S. Another guest discussed an extraordinarily racist book called The Camp of the Saints, which depicts Indian immigrants in the most vicious ways, as having “predicted what’s happening.”

And we cannot forget that Trump’s repeated claim that illegal immigrants represent an “invasion” also echoes “alt-right” themes, even if unwittingly.

These are but a few examples of the injection of white nationalist ideas and themes into our political and cultural discourse. To be clear, the vast majority of conservative or right-leaning Americans are not racist, hate racism, and utterly reject the ideology and language of white nationalism. Still, the “alt-right” has achieved remarkable success in influencing our national debate. And they do it, in part, by casting themselves as fearless warriors against political correctness, telling the truths that only “the left” won’t like. This perception of influence gives radicals a sense of momentum and energy.

As strange as it may sound, to focus on the President is to think too small. The old virus of white nationalism has been injected into our culture in a new way, and it’s imperative that we recognize its symptoms–including its language and ideas–and react with the energy and commitment to banish it back into the irrelevant margins of American life. 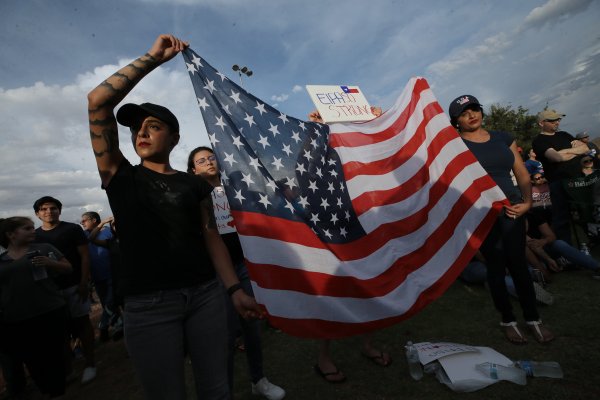 ‘We Are Being Eaten From Within’
Next Up: Editor's Pick