I Was in Kashmir When India Seized Control. This Is What I Saw

On Monday, the Indian government announced that Kashmir’s constitutionally-mandated autonomy would be revoked and political rule imposed from Delhi. This northern territory, claimed by both India and Pakistan and ruled in part by each, had been largely autonomous since it agreed to join India in 1947 as its only Muslim-majority state.

Now the government has revoked that autonomy, bypassing the Kashmiri legislature, arresting local politicians, and redrawing the political map. The previous day, the government cut Internet and phone connections to the valley, meaning the rest of the world has been largely blind to what is happening on the ground. Sanna Wani, who managed to catch a flight out on Monday, told TIME about what she saw.

On Monday evening I left Kashmir, my home. I was one of the lucky ones, able to catch a flight out of the valley with my family just after the security services began enforcing the curfew. The Internet and phone networks are down; very little information can get in or out. But I can tell you what I saw.

First, something about me. I was born and raised in Canada. My parents left Kashmir during the 1990s because it wasn’t safe then. But now we try to come back every year.

As soon as I arrived in July this year, I knew something was different. My father pulled me and my siblings aside, and told us about the rumors. Article 35A of the Indian constitution would be repealed, people were saying. That’s the article which prevents non-Kashmiris from owning land in Kashmir. People didn’t really think the government would touch Article 370, which guarantees Kashmir’s autonomy. We didn’t imagine the government would impose political rule from Delhi. We didn’t imagine Kashmiri politicians would be arrested. The government went so much further than we feared.

In the beginning, people weren’t expecting curfews. They were mainly just preparing for the Islamic holiday of Eid. But on Friday, news spread that the Amarnath Yatra, a big pilgrimage to a Hindu shrine in Kashmir which was supposed to last until Aug. 15, was cut short. That scared us. That’s when a feeling of panic began to set in.

That day I was in Srinagar, the capital of Kashmir. I had spent the day at my grandmother’s house, and everything was fine. But driving through the city on our way back home, the rumours were flying. Srinagar was full of people. People were buying as much food as they could. In every park we passed, people were selling livestock. There must have been tens of thousands of people gathering resources. Buses leaving for nearby villages were bursting full. People were sitting on the roofs. Everyone was evacuating or preparing in some way.

At that point, nobody official had said anything. The governor of Kashmir had told everyone to calm down, that this was just rumor-mongering. But we noticed the extra troops arriving. Everyone was really worried, saying they didn’t understand why there were so many soldiers coming in if nothing was happening. They were everywhere in these giant green military trucks.

On the ground, it was strange. Even though people were out on the streets gathering essentials, they were not speaking to each other, in public at least. There was a lot of military. People didn’t feel safe speculating publicly about what was going on.

I’ve been in Kashmir a couple of different times as curfews are happening, and they were nothing like this. We knew something serious was about to happen.

On Sunday, messages started circulating about an indefinite 24-hour curfew. On Whatsapp, a picture of a note from the main hospital circulated, asking the authorities for staff curfew passes. And by sunset prayers, the mosques in Srinagar were announcing there would be a curfew starting overnight. At around the same time, there was this flash text to everyone’s phones, saying “by the request of the government, all domestic [phone and Internet] networks are now shut down.” After that, our world shrank. We all stopped knowing what was going on outside.

So my father decided to buy plane tickets. He didn’t tell us. When I found out, I didn’t want to leave. I know that sounds stupid. But I thought if they’re going to trap us, I want to stay. I was frustrated. Kashmir was home. Why were we being forced out on the basis of rumors? It was insulting. It was painful. But he booked the ticket.

The focus turned to getting my elderly grandmother out. Quickly, we packed up her house. We knew we had to get her and my cousin, who is very pregnant, out of Kashmir. That night, none of us slept. So we were all in a tense mood come Monday morning, and my dad was the most tense. He has seen much more than I have in Kashmir.

Five minutes after leaving our house, we reached the first military blockade. There was a crowd of people trying to get to the hospital. There were maybe seven or eight vehicles. People were getting out of their cars and trying to talk to the police. And standing right behind the police was the Indian army.

At one point, we got into a bit of trouble because our driver started driving too quickly and he didn’t see one of the military flagging him down. It was scary. We stopped, he yelled at us and shook his gun. We were stopped at seven roadblocks before I lost count.

At each one, my father got out of the car, and was extremely deferential. It was a very strict, tense mood. We knew complete power lay with the soldiers. We were breaking curfew. People have been killed for less than that. It felt like we were taking a huge risk. It’s very scary when you have around 30 men, all armed with big rifles telling you to go home.

There was a stark difference in how the policing of the curfew was occurring in different parts of the city. The crackdown was really on downtown Srinagar. I saw six different barricades in the place where most protests occur, blocking off little alleyways. But as we got closer to the airport, it became less tense.

Right now, fear is hanging over everybody. I have a hard time sometimes distinguishing where the fear actually comes from. Crackdowns have happened so many times to our family. The military just enters your house and has the right to do so. And searches through every single room and asks every single person for identification.

There’s a recurring nightmare that me and my mom have that militants enter our house. And then there’s nothing that we can do to prove to the army that we didn’t actually know them. Like if they are in your house, you’re considered as guilty as they are. There’s no judicial system in Kashmir. If the army decides that you’re a threat, you’re a threat.

In the end, I was really grateful to my father for making us leave. But I worry. I worry about what it would mean for people in the valley if this was to escalate. I worry about how those people would be protected. I worry about my family that is still there. And I don’t know why, at this point after all these years, the world would even start to care. 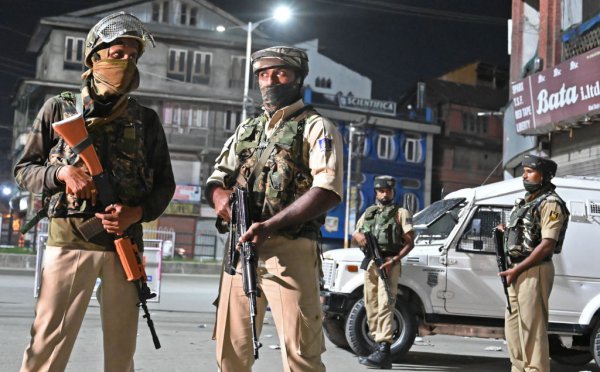 What India's Plan to Revoke Article 370 Means for Kashmir
Next Up: Editor's Pick