The internet has gathered to witness a young girl’s funeral for her pet lizard — which she took gravely seriously though none of the guests seemed terribly grief-stricken.

In the series of Snapchat videos posted to Twitter on Saturday, family members take turns paying their respects to the young girl’s dearly departed lizard.

Apparently, the lizard’s time with the family was brief, but nevertheless, everyone had a blast participating in the celebration of its life.

“So my neice’s [sic] lizard that she found outside died today… she had the house throw a whole funeral for it… mind you this kid went all tf out for her lizard and didn’t come to play with decor or food or the burial site, this is a thread on how it went y’all LMFAAOOOOOO,” her aunt, Briana Smith, captioned the original post.

“It was put together by my niece because she wanted her BFF to go away in a nice way,” Smith, who is featured in the video thread, told TIME.

Saying goodbye to a pet lost too soon is nothing to laugh at, but this particular ceremony has been spreading a lot of joy. In fact, the smiles on this family’s faces have charmed the internet far and wide to the tune of 2 million views on the Twitter post.

The humor comes thanks to a variety of key moments at this funeral, chief among them when the grandmother of the squad notes mid-eulogy that she has to head out because “John Wick is on…and he’s waiting for me.”

“She was the bravest, fastest, funniest lizard I’ve ever seen,” another woman says through fake tears.

Despite the fact that people didn’t take it too seriously, the elaborate sendoff was well-attended.

“We literally didn’t want to do it, but she was so stuck on her going away in a ‘pretty’ manner so he’d wake up pretty. My family just went with the flow and made it 10 times funnier,” she said.

There was quite the spread, including fruity drinks, strawberries and an assortment of finger foods including sandwiches, cookies and cheese and crackers, and a sign from the charming young event coordinator that read: “Thank you for your support.” Thanks, indeed.

The ceremony closes with Drake and Rick Ross’ “Money in the Grave,” which is pretty baller for a reptile.

“I think the responses are actually really interesting and amazing. There’s literally nothing but positivity coming from everybody. It’s heartwarming,” the young event organizer’s aunt told TIME. 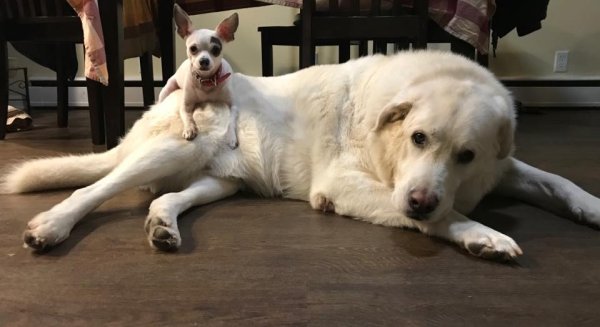 Pint-Sized Chihuahua Takes a Piggyback Ride on His Accommodating 'Dog Beach' Pal
Next Up: Editor's Pick