69 People Have Been Killed in Mass Shootings in 2019 Alone

Still reeling after two mass shootings in early August resulted in 31 deaths in two states over a span of less than 24 hours, the U.S. has been rocked by another gun rampage in West Texas that left 7 people dead and many more injured.

Earlier this month, 22 people were killed in a shooting at a Walmart in El Paso, Texas and nine victims shot dead in Dayton, Ohio.

But those are far from the first mass shooting in the U.S. this year. Over the previous months, other mass shootings have rocked the nation––from Sebring, Fla., to Gilroy, Calif. In 2019 alone, at least 69 people have been killed in mass shootings.

The definition varies, but for the purposes of this list, TIME is defining a mass shooting as a shooting at a public place in which at least three victims were killed.

Read more: 37 years of mass shootings in the U.S. in one chart

The total does not reflect several high-profile shootings this year, including the late-July shootings that killed two people at a Southaven, Miss. Walmart, or the shooting at Poway, Calif. Synagogue in April in which 60-year-old Lori Kaye was killed and three others were wounded.

And the total does not reflect mass killings that took place this year outside the U.S., like the shootings at two mosques in Christchurch, New Zealand, in March that left 51 dead.

The El Paso is the deadliest since the November 2017 Sutherland Springs, Texas church shooting. It is deadlier than the shooting at Marjory Stoneman Douglas High School in Parkland, Florida, in February 2018, which left 17 students and staff members dead.

Here’s an accounting of the mass shootings of 2019:

In January, a gunman shot and killed five people at the SunTrust Bank in Sebring, Florida. The suspect, Zephen Xaver, 21, then barricaded himself inside.

That same month, another shooter killed three people and wounded one before turning his gun on himself near Penn State University’s campus.

Police identified the suspected shooter as Jordan Witmer, 21. The shootings began in a restaurant in a Ramada hotel before the suspect broke into a home and killed another person before he fatally shot himself.

Five people were killed in February in a shooting at a warehouse in Aurora, Ill. near Chicago.

The shooter was identified as Gary Martin, a 45-year-old former employee who had been fired shortly before the shooting took place. All five victims were warehouse employees.

Five police police officers were shot and injured as they confronted the gunman. Another employee was wounded, but survived.

People from the community pay their respects to the victims of a deadly shooting at a Virginia Beach public works building, which claimed the lives of 12 people in Virginia Beach, Virginia on June 01, 2019.
Marvin Joseph—The Washington Post/Getty Images

Twelve people were killed and four more injured after a gunman went on a rampage in a Virginia Beach municipal center in late May. The suspect, DeWayne Craddock, was a 15-year public utilities engineer and a city employee at the time of the shooting

Following a protracted gun battle, police shot and killed the suspect. Mayor Bobby Dyer, called it “the most devastating day in the history of Virginia Beach.”

Three people were killed and and another wounded after a shooting at an Abbeville, S.C. apartment. Authorities arrested a teenage suspect, Elijah Tyrez Head, 19, and charged him with three counts of murder, one attempted murder, and possession of a weapon during a violent crime, according to FOX Carolina.

Police also arrested two other teens in connection with the killings, Ta’Zaria Idejah Curry, 19, and DaiJeanne Lee Hamilton, 18. Both women were charged with accessory after the fact of murder.

Police officers leave the scene of the investigation following a deadly shooting at the Gilroy Garlic Festival in Gilroy, California on July 28, 2019.
Philip Pacheco—AFP/Getty Images

Just days before August’s shootings in El Paso, Texas, and Dayton, Ohio, a gunman armed with an AK-47-style assault rifle opened fire at the Gilroy Garlic Festival in Northern California, killing two children and a young man, and injuring 15 others.

The shooter, identified as Santino William Legan, 19, had purchased his assault rifle legally earlier in July. Legan was a Gilroy resident at the time of the shooting.

Police officers responded quickly, engaging Legan and fatally shooting him in less than a minute. Authorities believe that Legan cut through a fence to get past the festival’s security.

Those accumulated tragedies in the U.S. this year were recently joined by the pair of mass shootings in El Paso, Texas, and Dayton, Ohio in early August.

On Aug. 3, a gunman opened fire at an El Paso Walmart, killing 22 people and leaving 25 more wounded. The suspected shooter, Patrick Crusius, 21, was taken into police custody, and the shooting is being investigated as a case of domestic terrorism, according to the U.S. Attorney in El Paso.

Police are also investigating a hate-filled manifesto that may have come from the suspect and could indicate the Walmart shooting was a hate crime.

The initial death toll was 20, but on Monday, Aug. 5, police and Del Sol Medical Center in El Paso announced that two additional victims had died at the hospital.

Pairs of shoes are piled behind the Ned Peppers bar belonging to victims of an active shooting that took place in Dayton, Ohio on August 04, 2019.
Megan Jelinger—AFP/Getty Images

Less than 24 hours after the El Paso shooting, a gunman opened fire in the early hours of Sunday, Aug. 4 in the lively Oregon District in Dayton.

The suspected gunman, Connor Betts, 24, was armed with an AR-15-style assault rifle fitted with a 100-round drum magazine. The shooter killed nine people including his sister, 22-year-old Megan Betts, and wounded at least 14 others, before he was shot dead after just 32 seconds by nearby police. Up to 37 people were injured, many of them while fleeing the shooter, police said.

Those officers’ quick actions may have saved many more lives that night, as the shooter was stopped by a hail of police bullets just before he was able to enter a bar crowded with Dayton residents seeking shelter.

“Had this individual made it through the doorway of Ned Peppers with that level of weaponry there would have catastrophic injuries and loss of life,” Dayton Police Chief Richard Biehl said in a Sunday briefing.

In the most recent 2019 mass shooting, 7 people were killed and approximately 21 injured in a rampage in and around the cities of Odessa and Midland, Texas.

As of early Sunday, the shooter has still not been identified, though police say he was a white man in his mid-30s.

The rampage began when a Texas Department of Public Safety trooper pulled over the suspect on Saturday afternoon. The man shot the police officer and fled, beginning a shooting spree in the area of the two cities. At one point, the shooter hijacked a U.S. Postal Service van, before eventually being shot and killed by police.

The original version of this story misstated in the headline the number of people killed in mass shootings in the U.S. in 2019. It is at least 60, not 55. 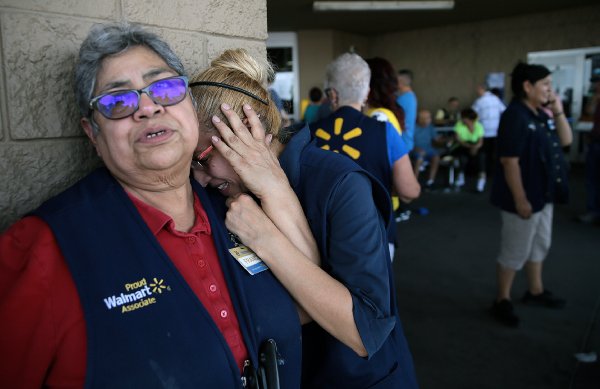 Searing Photos From 20 Years of Mass Shootings in America
Next Up: Editor's Pick