To combat racism, schools must work harder to unbuild what young Americans learn as racial common sense.
Getty Images
Ideas
By Charles King
King, a professor at Georgetown University, is the author most recently of Gods of the Upper Air, winner of the 2020 Anisfield-Wolf Book Award in nonfiction.

Every semester college students come into my social science classes knowing two incompatible things: that racism and white nationalism are repugnant, but that race and whiteness are deeply, biologically real. The former is linked to white supremacy and the history of European colonialism. But the latter is simply a matter of science—or so they seem to believe.

They have read Martin Luther King Jr.’s “Letter from Birmingham Jail.” They can name the uprooting of Native Americans and the Atlantic slave trade as their country’s foundational sins. Students from some progressive school districts have also learned to call race a social construct, the product of history and government policy, not of our genes. But that is not the norm in my classroom. Many, perhaps most, of my undergraduates have learned how to be analytical racists—believing that humanity is objectively divided into timeless, genetic races—at the same time they have been taught to reject racism as self-evidently evil.

Racism is not just the claim that people can be categorized as better or worse based on the racial category to which they are assigned. It is also the belief in the innate, universal reality of a thing called race—the concept of an inherent “whiteness” or “blackness” or “Asianness” that many American students have absorbed from the earliest moments of their lives.

In fighting the ideology of white supremacy, teaching racial tolerance or multiculturalism in history or English class won’t do the trick. Along the science hallway, America’s schools are wasting a critical opportunity to use data-driven knowledge to unpack the country’s most enduring falsehood. To combat racism, schools must work harder to unbuild what young Americans learn as racial common sense.

Only a few decades ago, biology classes talked openly about race, but via theories of human difference and hierarchy taken for granted at the time. Maps showed the planet as divided into exclusive racial geographies—“Negroids” there, “Mongoloids” over there, “Caucasoids” nearer home.

Everyone had a race, students were taught. You were born into one and died in one. You passed it down to your children. Some people might be “biracial,” the product of reproduction across racial lines. But that was only a way of saying that they were a mixture of two more fundamental things—a hybrid, like a new rose variety.

These ideas began to be discredited more than a century ago, in large part through the work of the pioneering Columbia University anthropologist Franz Boas. As Boas argued already in 1911, any specific trait one might identify for defining a race—from head shape to femur length, in his day—displays more variation within an alleged racial category than across categories.

No biological gulf separates all people who identify as white from those identifying as Asian, or all African-Americans from all Native Americans. Because the categories are fuzzy, they cannot fully account for the traits that racial theorists attributed to them, such as intelligence or fitness to govern.

Since Boas’s era, the core ideas of racial science have been denounced by professional bodies such as the American Anthropological Association and the American Medical Association. In 2018 National Geographic magazine published a cover story issuing a public apology for its past promotion of inherent differences among racial categories and the rank ordering of societies as “primitive” and “civilized.”

The revolution in genetic mapping has further undermined the idea of essential racial difference. As we now know, social categories such as race and ethnicity might be good proxies for a very specific genetic marker, but they are not at all correlated with others.

Moreover, any correlation is only a probability: a finding that some genetic trait is more pronounced, on average, in a given population than another. Our individual ancestry—with all of its sexual admixture and cellular accident along the long chain people it took to produce you—may nudge us along particular life pathways. But those pathways are in turn twisted by the monumental forces of environment and culture.

And the fact that different societies have different concepts of race—or no concept of it at all—is itself the best evidence that racial categories are products of history and circumstance, not of our innards. Cuba, Brazil, India, and France, for example, all have vastly different ways of labeling their own inhabitants.

But powerful forces sustain this outmoded ways of seeing the world. Race and other forms of identity continue to be deeply “biologized,” that is, spoken of as if they were rooted deep inside an individual’s being. A half century ago, the government stopped punishing people who married across racial categories. But it is less than two decades since Americans could claim multiple identity categories on the U.S. census. Even still, the census continues to present people with pre-set boxes, as if these were the only natural and obvious ones.

Genetics testing companies tout percentage-point accuracy in determining your “genetic ethnicity,” as Ancestry.com puts it. But telling people that their biologies come shrink-wrapped into classifications that make sense to us right now—an identity called Irish, for example, but not one called Babylonian, Scythian, or Axumite—is both bad history and bad science. At worst, it is simply racism by a different name.

Schools and textbooks could play a major role in combatting these ideas. But perhaps out of fear of being dragged back into the mire of racial theory, science classes today are largely silent on biology and identity—avoiding the legacy of racial science rather than actively teaching against it. That means students are rarely challenged when they repeat the folk theories that they pick up in American society.

My white students, for example, typically speak as if it is only the black or Asian students who have a race, but not them. They repeat old racist canards—for example, that sickle cell disease is an exclusively African-American condition—with shocking innocence. They come to college assuming that black and brown people are deviations from a white standard, no matter how embarrassed they are when someone calls them out on this point.

At worst, high school courses are still teaching things that race theorists and eugenicists from a century ago would have understood and applauded. In imparting these ideas, teachers are often abiding by state education standards or following the textbook. For example, under the Texas state standards for Human Geography, students are expected to be able to “define race and ethnicity and differentiate among the distinguishing characteristics of minority groups.” North Carolina’s standards in geography suggest that teachers instruct students that “groups whose culture prevents them from doing a particular thing such as eating meat . . . are less likely to participate in the globalization process.”

Some textbooks are thankfully clear on the fact that people don’t come prepackaged in wholly distinct biological races. But others are disturbingly muddled when it comes to explaining that concepts such as race, ethnicity, and nationality are all varieties of the same thing: dividing lines invented by human beings and then reimagined as somehow natural or God-given. “Ethnicity is often confused with race,” as one of the recommended Advanced Placement textbooks in geography puts it unhelpfully. Race is a concept that “relates to physiological features . . . such as skin color, hair type, and shape of head,” the book explains, while ethnicity is derived from “a place on Earth’s surface.”

King, a professor at Georgetown, is the author of Gods of the Upper Air: How a Circle of Renegade Anthropologists Reinvented Race, Sex, and Gender in the Twentieth Century.

It is little wonder that students are confused when they do their homework reading, then look at their “genetic ethnicity” on Ancestry.com, and then have to figure out which of the U.S. census categories matches who they “really” are.

But there is a clear way out. Schools should engage head-on with race and racism, but in science class, not just in English or history courses. There is no more powerful tool against prejudice than the skepticism that comes with the scientific method. Be critical of your own easy observations. Follow the data. And then be critical of the data, too.

Talk about how pseudo-science was used to build whiteness, not just blackness. Illustrate the ways in which faulty scientific reasoning was used by the Nazis as well as by American eugenicists of the 1920s and 1930s.

Demonstrate the principles of genetic inheritance by showing explicitly that the things Americans associate with race—such as skin color, hair texture, and eye shape—don’t cluster in the ways we might believe. Chart the complexities of global genetic variation and the weird, looping pathways that led from our distant ancestors down to us. Talk about other forms of biologized difference, such as caste in India and gender and sexuality in contemporary America, and compare them to what people typically say about the fixedness or fluidity of race.

Today, in the same building where we are teaching about the Bill of Rights and Rosa Parks, students should have the chance to learn why America’s history of state-sponsored racism was a scientific travesty as well as a moral one. 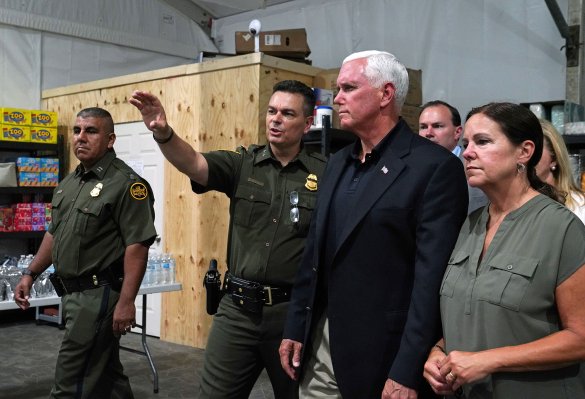 The Shame of the Border Crisis Will Never Leave Us
Next Up: Editor's Pick