President Obama pledged to improve mental health services for troubled soldiers and veterans Wednesday, while paying respects at a memorial service to three soldiers who were killed at the Fort Hood Army base on April 2.

“In our open society we can never eliminate every risk, but as a nation we can do more to help counsel those with mental health issues to keep firearms out of the hands of those facing deep difficulties,” Obama said. ” As Commander-in -Chief I’m determined that we will continue to step up efforts to reach troops and veterans that are hurting.”

The memorial honored the lives of three soldiers—Staff Sgt. Carlos Lazaney-Rodriguez, Sgt. Timothy Owens, and Sgt. First Class Daniel M. Ferguson—who were killed when Army Spc. Ivan Lopez, an Iraq War veteran, allegedly opened fire on the Army base, wounding at least 16 people and killing three before turning the gun on himself.

The incident was the second mass shooting on the base since 13 people were killed by former army psychiatrist Nidal Hasan on Nov. 5, 2009. Lopez, 34, had reportedly gotten into an altercation over leave before opening fire. Military officials said Lopez had been undergoing treatment for anxiety, depression and was being analyzed for post-traumatic stress disorder.

Throughout Tuesday’s service, leaders on the base eulogized the three fallen as their families, their fellow servicemen, military leaders, and Texas lawmakers looked on. Together, the three servicemen had served in the Army for 50 years. Between them, Obama said, they had been deployed nine times. Sgt. Carlos A. Lazaney-Rodriguez, 38, had joined the military soon after he turned 18 was planning to retire.

Obama quoted several family members and friends during his speech, including a social media post Sgt. Timothy Owen’s daughter Lori published shortly after her father was killed. “Love your family because you never know when they’re going to be taken from you. I love you daddy,” she reportedly wrote.

“Like the 576 Ft Hood soldiers who have given their lives in Iraq and Afghanistan they were taken far too soon,” Obama said. “Like the 13 Americans we lost five years ago, their passing shakes our soul.”

Both U.S. Senators from Texas, Republicans John Cornyn and Ted Cruz, also attended the service. On Tuesday, Sen. Cornyn delivered remarks on the floor of the Senate paying tribute to the victims. He took time to note not only the horror of the event, but also the “best of humanity demonstrated during this time of tragedy and crisis.”

During the service Tuesday, President Obama reiterated that sentiment.

“It was love for country that inspired these three Americans to put on the uniform and join the greatest army the world has ever known, “ Obama said. “And it was love for their comrades, for all of you, that defined their last moments.” 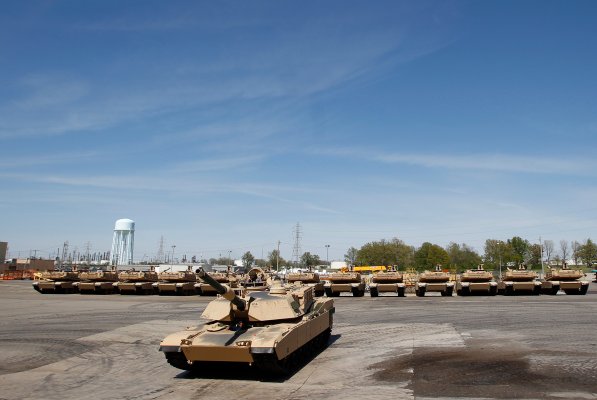 The Army v. The Press
Next Up: Editor's Pick