The Shame of the Border Crisis Will Never Leave Us

What I can’t shake is that smell. It came back to me again as soon as I saw the pictures of the detention centers. I saw it when Mike Pence and Lindsay Graham entered a center and visibly froze in horror, and clearly tried to hold their breath. I know that smell. The children, the mothers, the fathers, the shame of being filthy and hopeless and afraid. I used to carry that smell on my own skin after long days with the border’s dispossessed. The poor, unaccompanied minors, orphans, prisoners, garbage pickers.

It was 1977 and I wasn’t any kind of saint, and I wasn’t a socialist snowflake. I wasn’t a refugee. I was a translator and volunteer all along the border, serving under a crusty Baptist preacher, a red-state humanitarian, a war veteran. I worked there from the mid-70s to the mid-90s. In 2004, I learned to track humans with a Border patrol supervisory agent for a book. Last year, I was in Celaya, Mexico, visiting the caravans. Remember the caravans? Last week’s exaggerated threat already forgotten. That smell is upon them, too.

It’s so easy to assume that the Other, that nettlesome barbarian coming around for a free lunch is not quite human. The immigrant brings heinous diseases to our pristine country. See Benjamin Franklin railing against alien Germans. Or fascist Europe’s rat-drawings of Jews. Or our recent folly, the magical yellow brick wall. Dirty, in the Western mind, equals bad. Inhumane conditions are easy to impose. Mothers and babies are the easiest to afflict. The smell rises. Here’s the thing, though—it is pornography. Filth-porn for dominants in a diabolical political S&M session with no safe word. “Help,” “mercy,” “please” don’t function in these dungeons. And the real point of that smell is to taint all Americans. It’s the smell of victory. It’s not your victory. What is yours is acquiescence. There is no “Them,” there is only us.

When you walk into an orphanage along the border, or the cardboard and wire home of a garbage dump scavenger, or a refugee rescue shelter along the long hot road to the USA, the smell presents itself. The kids bear it like a stain, the adults feel it as visceral shame. It is hair, and it is sweat, and it is more biological scents that circumstance has not allowed relief. But it is not a choice—it’s the first wire cage.

Back in my relief-worker days, the first thing we would do in these locations was to celebrate. There were games and competitions and donuts and prizes—because tossing worthless goods at scrabbling knots of desperate survivors for TV cameras is pure power-porn. Once everyone had settled into a common humanity, where laughter happened, then trust could begin. The next step was washing. We washed and shampooed the kids. No one touched the mothers, though when we could, we gave them water for their own personal use. My first job, aside from providing a voice, was washing feet. Same job. After play, and cleanliness, we distributed food and clothes. Sanitary pads and diapers. Is it insane to ask our for-profit kinderlagers of this administration to do the same? Apparently, yes it is.

Down in Celaya, halfway through the terrible journey of the refugees, there is a respite center known as Abba House. It is not huge, except in its effect. Sometimes its limited space is crammed with 300 sleeping people. A gentleman whose leg was torn off by the migrant train works there with kids too exhausted to go on. The Mexican pastor who created Abba House cares for anyone who comes, often under great risk from predators. He accepts all guests. The one thing he will not accept is that smell. He knows that the most important thing for a person’s dignity is cleanliness, followed by a safe haven. Doctors helped him determine that it takes three days of rest for these wounded bodies to recharge and carry on. He installed a bank of showers so that every traveler who comes first gets a bath, then clean clothes, and some kind of shoes. He cried when he showed me a couch in a corner where an older man reclined reading a book. “That is what you need to be a human being.”

He also pointed out that those heading north are immigrants, but when the US rebuffs them and sends them back, they are refugees. If they return to Honduras or Salvador, many will die. Mexico will be forever changed by these wanderers with nowhere left to go. And what about the Haitians? Yes, Haitians—Tijuana has a robust new Haitian community. They are climate refugees, escaping more hurricanes. Climate also drives much of the Central American hejira. Is this what the administration doesn’t want you to know?

All this is just the beginning. These strangers seeking help are the harbinger of the coming global tide of climate refugees. Heat. Crop failure. Weather. Floods. The magic act of the New Republican Party has magic phrases like Bad Hombres, like The Wall, like illegals. MS13 cadres of ten-month old children. They are meant to distract you. They feed your fear, your rage, your guilt. All of them work. They con you into believing you have done some moral act by feeling. What the magicians don’t want is action. Can you smell that smell? It is the scent of our world burning. These children we have spit on are human kindling.

What would you do if strangers were paid $750 a day to hold your child in a secret warehouse where she is comforted by concrete and steel, as if she were a baby monkey in a bio research lab? You would not write Tweets. You would tear it down.

Ultimately, the taint is upon you and me. We are responsible. We own this. Kindness is not weakness. Cruelty is not strength. We have gone instantly from the land of “helicopter parents” to the land that chases parents with helicopters. Pharaoh tried brutality once before. Didn’t work. This phenomenon is a Biblical exodus in the fevered world, and we Samaritans are free to decide how our children will forever judge us.

Mr. Pence, Mr. Graham—breathe deep, boys. Your legacy will never wash off. You will forever reek. 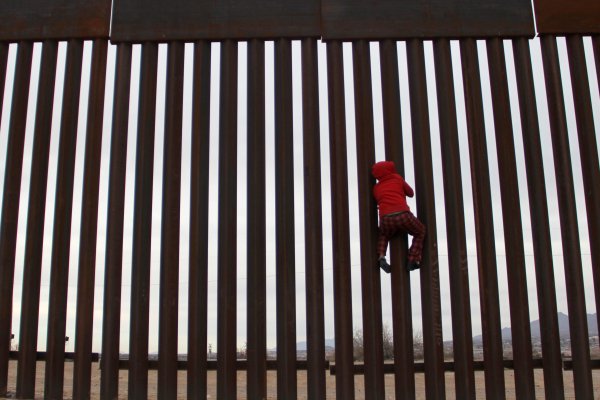 'Joy, Excitement, and Togetherness at the Border.' With Three Hot Pink See-Saws, These Architects Turned the U.S.-Mexico Border Wall Into a Playscape
Next Up: Editor's Pick