A Marianne Williamson Supporter Instructed a CNN Staffer How to Knock on a Door at This Week's Presidential Debate. Then Things Got Weird

Democratic presidential hopeful US author and writer Marianne Williamson speaks during the first round of the second Democratic primary debate of the 2020 presidential campaign season at the Fox Theatre in Detroit, Michigan on July 30, 2019.
BRENDAN SMIALOWSKI—AFP/Getty Images
By Rachel E. Greenspan

In what is certainly one of the more confusing ‘punchlines’ to pop up on the 2020 campaign trail, a simple “knock, knock” turned into a teaching moment in Marianne Williamson‘s green room at Tuesday’s Democratic primary debate.

Journalist (and one of TIME’s Most Influential People on the Internet) Yashar Ali reported in a tweet Thursday that “one of Marianne Williamson’s guests told a CNN staffer that they weren’t knocking on her door properly” during CNN’s first night of Presidential debates. Citing two sources on-scene, Ali wrote that the guest then “proceeded to educate the staffer on the proper way to knock.”

Shortly after Ali’s tweets, the actress Frances Fisher, a.k.a. Ruth Dewitt Bukater, Titanic‘s first class momager (but also known for Unforgiven, True Crime and the forthcoming Watchmen TV series, among other projects) confirmed the incident and her role therein, though challenging the “incendiary” nature of his reporting. Fisher had attended the Detroit debate to support Williamson, her longtime friend, and wanted to make sure she was in the best possible headspace before the main event.

“I kindly explained to the young lady that a light tap on a closed door is something that would be greatly appreciated. Then a louder knock if no one answers,” Fisher explained in follow-up tweets. “The young lady seemed to appreciate the education.”

Fisher, once labeled a “devotee” of Williamson’s by the Washington Post, made sure to defend her candidate, whom she’s been supporting politically since a failed run for Congress in 2014.

“[Williamson] did NOT request this. It was me,” she said. Williamson’s press team did not immediately respond to TIME’s request for comment. Williamson, whose inner circle includes many a Hollywood mainstay, had shared an Instagram at the scene of the crime on Tuesday night.

“We all have bigger issues to deal with in America,” Fisher later tweeted, asking Ali to delete his “incendiary” tweets and going to great pains to reply to other users sharing her take with clarifications. 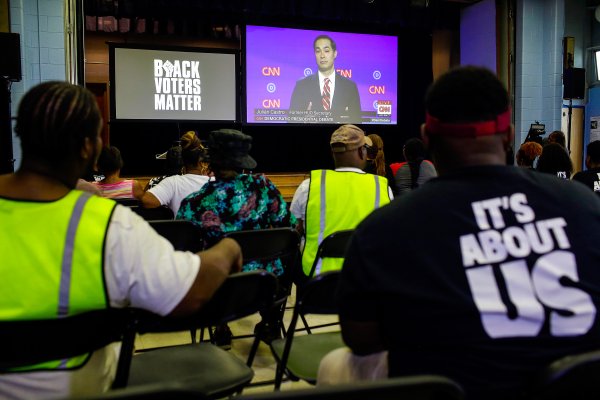 What It Was Like Watching the Debates in Flint
Next Up: Editor's Pick