Siberian Wildfires and Heatwaves in Alaska: How the Arctic Is Nearing a Point of No Return

Many of the globe’s far northern regions have been experiencing extreme weather events over the past two months. Plumes of smoke have been picked up by satellites from wildfires across Alaska and Siberia and Greenland has experienced rapid ice loss as usually frigid regions have experienced heatwaves and record temperatures.

As the Arctic faces extreme weather events caused by climate change, the events could have ripple effects that accelerate temperature increases across the world, according to scientists and experts.

“The basic chemistry and the basic physics of how the atmosphere absorbs heat — there’s no path where you can imagine that the Arctic is going to start to cool off again,” says Brian Brettschneider, a climatologist and post doctoral fellow at the International Arctic Research Center at the University of Alaska Fairbanks.

“Cold air has to come from somewhere, cold air doesn’t just magically appear, and that somewhere has to be accounted for in the entire energy balance of the Earth. Right now the whole Earth has just warmed up,” Brettschneider tells TIME. “It would take a dramatic reversal of the chemical composition of the atmosphere.”

In Alaska, 2.4 million acres of wildfire have burned through July. In the northern Russian province of Siberia, more than 7 million acres have burned. Greenland has also seen several wildfires in July, but the largest threat to Greenland is a heatwave that spread from Europe to the Arctic country, causing 197 billion tons of ice melt in July alone.

Meteorologist Eric Holthaus says the Arctic is nearing a point of no return, as the global temperature increases closer to 1.5 degrees Celsius above preindustrial era levels, which the Intergovernmental Panel on Climate Change (IPCC) warns would have destructive consequences, creating more frequent and extreme weather events and causing high sea level rise.

“We haven’t crossed any major irreversible tipping points yet, but for each tenth of a degree that we get closer to 1.5 [degrees Celsius], it’s sort of like time’s running out,” Holthaus tells TIME. “We’re already there in some places where the ice just doesn’t exist in the times and places that it used to. That’s a permanent change effectively to those parts of the Arctic.”

What’s causing all of this extreme weather?

June 2019 was the hottest June on record globally which was the result of climate change, according to the National Oceanic and Atmospheric Administration (NOAA). The World Meteorological Organization, siting data from the Copernicus Earth Observation Program, says July is on track to becoming the hottest month in recorded history.

“Extremes are a natural part of the climate system,” Ahira Sánchez-Lugo, a climatologist at NOAA tells TIME. “But the problem that’s happening right now is as the climate warms, what used to be an extreme hot temperature is now becoming more frequent.”

Sánchez-Lugo says the world can expect to see more intense and frequent drought, heavy rain in other areas and extreme heat waves as climate change continues.

A heatwave also struck in Alaska, which saw record-breaking temperatures in June and July, lowering humidity and moister content in plant life, making them more flammable. Lightening and thunder, which occur naturally, have sparked about 95% of wildfires in remote Arctic areas that experienced dry weather, according to Brettschneider.

Smoke rises from a wildfire on July 3, 2019 south of Talkeetna, Alaska near the George Parks Highway. Alaska is bracing for a dangerous fire season with record warm temperatures and dry conditions in parts of the state.
Lance King—Getty Images

“It’s a natural process that initiates the fires, but it’s a warm environment that makes the fire more severe,” Brettschneider says.

Similarly, in Siberia, lightning strikes ignited fires that have burned to such an extreme that smoke has spread to Alaska and Canada. President Donald Trump on Thursday offered Russia President Vladamir Putin help in fighting the wildfires, which Putin took as a “sign that it is possible that full-scale bilateral relations will be restored in the future,” according to an online statement by the Russian government.

According to the Associated Press, Maxim Yakovenko, head of Russia’s meteorological services told reporters at a Friday press conference that the fires are linked to climate change.

Meanwhile, the heatwave that caused record-breaking extreme temperatures in Europe in July has struck Greenland, which was already experiencing warm temperatures. The Greenland ice sheet has been in a vulnerable position, and on August 1 lost 12 billion tons, according to Holthaus.

Why should people worry about wildfires and ice sheet melt?

As fires burn and temperatures increase in the Arctic, thousands of years worth of carbon stored in and plant life is released into the atmosphere, potentially accelerating global warming.

“You get the accumulation of plant material year after year after year that never fully decomposes, and that carbon becomes locked away in that plant material that doesn’t fully decompose,” Brettschneider says. “But, as you warm up the environment, you let that natural decomposition process fully play out… You end up with tens or hundreds or thousands of years of plant decomposition happening in one or two or ten years.”

That adds up to massive amounts of methane, and ultimately carbon dioxide, being released into the atmosphere, Brettschneider adds. “We think we have a handle on the trajectory of warming, but if we have this unexpectedly large release of methane from permafrost, then we’re going to have to change our assumptions about how fast warming is going to occur, and that change would be faster.”

More immediately, smoke from the wildfires can have damaging effects on people’s health.

Though the wildfires in Alaska and Siberia have happened in remote and hard to reach portions of the terrain — which has contributed to the slow response efforts in Siberia — some smoke has made its way into highly populated areas of Russia. Inhaling wildfire smoke can have a range of side effects from burning eyes and running nose, to lung and heart disease.

Along with record-breaking heat, wildfires pose another threat to ice sheet melt, according to Holthaus. As fires burn and release smoke into the atmosphere, they release black carbon, also known as soot. Soot is landing in Greenland because of the wildfires, making the ice sheet darker and and therefore absorbing more thermal energy and melting quicker, says Holthaus. He adds that researchers are still studying the extent of melt as a result of soot.

“Besides maybe coral reefs, Arctic sea ice has been the quickest response system in the world in terms of warming,” Holthaus says. “We still don’t know a lot about how ice sheets behave when they’re pushed to such extremes like what we’re doing right now… We’re sort of watching in real time what’s happening and trying to understand it.”

Melting ice sheets and glaciers contribute to sea level rise, and also contribute to global temperature increases as the surface goes from white to blue. Blue water absorbs heat rather than reflects it the way that ice does.

An image taken on June 18, 2019 of the Kangersuneq glacial ice fields in Kapissisillit, Greenland. Milder weather than normal since the start of summer, led to the UN's weather agency voicing concern that the hot air which produced the recent extreme heat wave in Europe could be headed toward Greenland where it could contribute to increased melting of ice.
Keith Virgo—AP

“Trying to understand how glaciers and ice sheets behave is extremely consequential science right now,” he adds. “It’s the question of do we have 50 years or 250 years until the ice sheet melts?”

If the Greenland ice sheet melted completely, the global sea level would rise by roughly seven meters, or 23 feet, according to the National Snow and Ice Data Center.

“What’s special about the Arctic is that there really is an on and off switch,” Holthaus says. “Once the ice is gone, it really changes things dramatically, and that’s the process that we’re starting to see play out.” 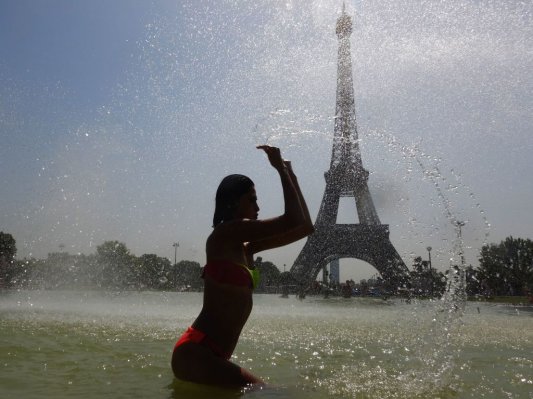 These Cities Broke Records in Europe's Heat Wave
Next Up: Editor's Pick