Fast & Furious Presents: Hobbs & Shaw Proves There’s Such a Thing as Too Much Action

An action-packed movie is supposedly a good thing. Is there any such thing as too much action? Of course not! Just keep stuffing it in. Need to cut some banter or character insights to fit more action? Go right ahead. Nobody really cares about that stuff, anyway.

Or do they? For audiences who love either Dwayne Johnson, the affable former pro wrestler whose grin is like the blessing of a benevolent sun god, or Jason Statham, the action star with a sultry rasp of a voice as velvety as the nap on a Gucci tux, the promise of Fast & Furious Presents: Hobbs & Shaw is almost irresistible. A whole movie, just for these two guys? Add to that the presence of the appealingly spiky Vanessa Kirby, from the Netflix series The Crown but also one of the standouts of last year’s Mission: Impossible—Fallout: That should be enough sizzle, and enough wisecracks, to carry three movies, let alone one.

But too much of a good thing is a bad thing, and this movie’s unwieldy, double-ampersand title should serve as a warning: Johnson, Statham and Kirby are all wonderful in Fast & Furious Presents: Hobbs & Shaw—when they’re talking. They’re terrific for much of the time when they’re moving, too—Johnson and Statham aren’t action stars for nothing. But somewhere around the midpoint of Hobbs & Shaw, the action sequences become so elaborate that they start to weigh the movie down; it becomes less a lean machine than an unwieldy, chubby sausage. And even if you feel certain there’s no such thing as too much action, you surely know when you’ve had too much sausage.

In Hobbs & Shaw, Johnson plays Luke Hobbs, of the Diplomatic Security Service, the guy who tossed Statham’s Deckard Shaw into a high-security prison at the end of Furious 7. Though Shaw is now out and about and working for the correct side, it’s an understatement to say that these two do not get along. At the beginning of Hobbs & Shaw, Hobbs is sweetly enjoying spending time with his young daughter, Sam (Eliana Sua), in Los Angeles. Shaw is slinking around London looking cool, at one point stopping in to visit his mother, Queenie (Helen Mirren), in prison. When Hobbs and Shaw are called upon to work together—to save the world from a lethal stolen virus—the volley of insults that fly between them is like a symphony of firecrackers. “I’ll have this job done while you’re still putting on your baby oil,” Shaw tells Hobbs. Hobbs retorts that his ears are offended by Shaw’s “nasally, prepubescent Harry Potter voice.” And so on.

Their nemesis here is Idris Elba’s superpower-enhanced supervillain, Brixton—he’s the guy out to procure the virus, but just as he thinks he’s got it in his clutches, a quick-thinking MI6 agent injects the for-now safely encapsulated virus into herself. That agent is Kirby’s Hattie Shaw—sister of Deckard, daughter of Queenie—who’s forced underground to keep Brixton off her trail. Hobbs and Shaw locate Hattie and try at first to protect her, though she doesn’t need protecting: As Kirby plays her, she’s smart and saucy and mildly acidic, a great foil, in particular, for Johnson’s grinning-big-guy friendliness.

It seems, in the early half of Hobbs & Shaw, that no style or character detail has been overlooked: Statham is called upon to pull off the tricky turtleneck-and-sport-jacket look, which he does with aplomb. And when he visits Queenie in prison, it must be said that her amazing raspberry-fuchsia lipstick matches her fetching big-house jumpsuit exactly. Hobbs & Shaw should be fun, and for a good stretch, it is, particularly the hand-to-hand combat scenes: It’s a delight to watch Statham karate-chop and swing-kick his way through a slew of baddies; Johnson uses his brawny might and easy-going humor to dispatch any number of thugs. There are some wonderful touches here and there: The superb character actor Eddie Marsan plays a nerdy scientist who at one point gets to man a flamethrower, even if his moment of glory is disappointingly short-lived.

Fast & Furious Presents: Hobbs & Shaw was directed by David Leitch, the stunt specialist who co-directed the first John Wick movie, as well as Atomic Blonde and Deadpool 2, and there’s no doubt he knows his way around a stunt. But the loud, cluttered sequences that involve dangling from skyscrapers, exploding vehicles and the like are the least exciting elements of Hobbs & Shaw. In the movie’s second half, the stunts become more and more extravagant. They begin to look less like fun and more like work, and they throw the movie’s pacing out of whack: What begins as a rambunctious lark featuring a trio of hugely appealing performers becomes a bottom-heavy spectacle loaded with helicopters and heavy artillery. All of that gets in the way of looking at the stars, and of eavesdropping on their rat-a-tat ribbing. Hobbs & Shaw is action-packed all right. But everybody knows you can move much faster when you’ve mastered the art of packing light. 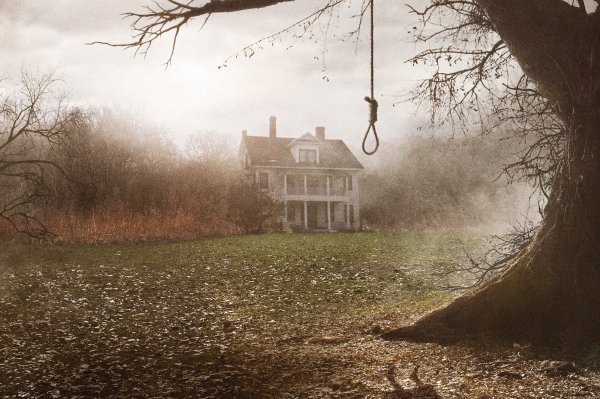 The 10 Best Horror Movies on Netflix to Stream Right Now
Next Up: Editor's Pick