James Corden seemed to have no idea what he was in for when he invited Jeff Goldblum to The Late Late Show for an old-fashioned rap battle. Corden also seemed to think that after delivering a few good lines about Goldblum’s musical taste (“You’re in a jazz band, isn’t that right? / I’m amazed you found a way to make jazz more white”) and the actor’s decision to star in The Fly (“They thought, repulsive gross creature, I know just the guy”) that he may have won latest Drop the Mic challenge.

Then Goldblum got on the mic and it was all over for Corden. “When you were born, I was already 25, which means I’ve been a sex symbol longer than you’ve been alive,” the Jurassic Park star rapped. The actor took no prisoners while skewering Corden, mocking his work hosting The Tony Awards (“You host the Tonys for actors who sing / Which is funny ‘cause you suck at both those things”) and in Ocean’s 8.

However it was Corden’s role in the upcoming movie musical Cats that really gave Goldblum a target for his savage rhymes. Turns out Goldblum saw the trailer for the movie and had a few thoughts. “I saw the Cats trailer and quickly noticed you. You were the weirdest part of it, and that’s hard to do,” Goldblum rapped. “Seeing you as a cat was completely unnerving but how you look in real life is so more disturbing. Is there any chance we can send him back to the Brits? Why did we trade Meghan Markle for something like this?” Drop the Mic, indeed.

Watch the Jeff Goldblum on James Corden video below. 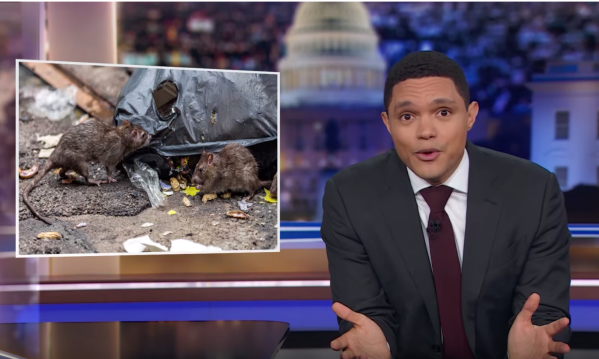 Trevor Noah Stands Up for Baltimore After Trump's Rats Comments
Next Up: Editor's Pick