Middle school, as documented in such educational opuses as Eighth Grade and School of Rock, is legendarily awful. Students who have done well in elementary school often stumble, become isolated and fall behind. But Geoffrey Borman, a professor at University of Wisconsin Madison who specializes in education policy and analysis, and his team, think they may have found an answer.

In a study, the results of which came out on July 29 in the Proceedings of the National Academy of Sciences, they gave more than 1,000 Wisconsin students two 15-minute writing exercises, one at the start of school and one a month later. They were asked to reflect on a survey, with quotes lifted loosely from former students, about struggling in the early months of school, feeling as though they didn’t belong, and reaching out for help from teachers and other students. The first assignment focused on the management of academic tasks and the second on navigating new social groups.

Their findings were encouraging, and thanks to the long term nature of academic publishing have already been replicated in Arizona. Education Week reports of the follow up: “As in a prior study of Wisconsin 6th graders, the 7th graders who participated in the writing exercise had fewer failing grades and better overall GPAs at the end of the school year than their peers who had not participated. The researchers found no changes in attendance or discipline, but did find that students who had participated in the writing test valued “doing well in school” more at the end of the year than their peers.”

We asked Borman to explain his research:

What makes middle school so difficult?
The transition to middle school is the perfect storm! As children enter adolescence, the developmental changes that they experience are more profound than at any other time of life—outside of the dramatic changes from birth to two years old. Piled on top of this significant developmental transition, we require about 90% of our students in the U.S. to make a physical move from the familiar neighborhood elementary school to a larger, distant, and more complex place called middle school or junior high school. Research has shown that students who remain in a K-8 school fare significantly better academically than their counterparts who transition to a middle school at grade 6 or 7. The physical transition to the more complicated and unfamiliar middle school is stressful and difficult and most students suffer socially, psychologically and academically.

Middle schools are not usually well-equipped to help students make this transition. In fact, many things about middle school actually make things worse. For instance, during each year of grade school, most students are under the care of one caring teacher, but middle schools demand that students must now develop new relationships with several teachers who have different personalities and who assign grades that suddenly seem to mean much more. Middle-school students must also negotiate new relationships with larger networks of students, many of whom they have never met, and many of whom appear quite a bit older and imposing. Early adolescents become increasingly aware of how others, especially their classmates, see them and they are desperately trying to fit in. A bad day in the lunchroom or a bad grade on an assignment can cause them to question whether they are going to turn out to be popular or successful students who fit in both socially and academically.

Typically most parents and educators start to worry about alienation in high school. Why did you choose to focus on middle school?
The process of alienation and disengagement from school often takes root at the beginning of middle school. In fact, many school districts now have “early warning” systems that help predict which students may be at risk for dropping out of high school. Those kids who begin to receive bad grades, have higher rates of absences, and who get into trouble during the early years of middle school are typically those who will eventually drop out of high school. We wanted to take a more proactive stance to help prevent this process of disengagement from happening in the first place.

Your study suggests that what middle schoolers really need is a sense of belonging. How did your intervention foster that?
Our intervention teaches students two important lessons. First, the exercises convey that all students experience some difficulty, both socially and academically, at the beginning of middle school. After a little while, though, things get better. When students read our exercises, they learn that there is not something wrong with them. Instead, they learn that the transition is a shared experience that is initially difficult for just about everyone. Like jumping into a cool swimming pool on a hot day, the experience is initially shocking and uncomfortable, but after a little while we get used to it and the cool water actually feels pretty good.

Second, the exercises tell students that help is available from teachers and other adults at the school. Usually, relationships between teachers and students become more distant during middle school. However, the students who received the intervention reported trust in their teachers, that they liked school, were not as nervous about big tests, and that, ultimately, felt like they fit in. These more positive attitudes about school help students worry less, which helps them devote more cognitive and psychological resources to doing well in school. Their increased sense of fitting in also led to fewer absences from school and fewer instances of acting out. Over time, these shifts in student beliefs and behaviors improve academic performance, which then reinforce students’ positive beliefs. Rather than the all-too-often downward spiral students experience at the onset of middle school, the intervention sets in motion some positive momentum that helps kids feel like they do belong.

What differences did your intervention make?
The students who received our intervention missed fewer days of school, got sent to the principal’s office less often, and got better grades. In addition, our student surveys showed that students had better relationships with their teachers and classmates, were less anxious about big tests, and were more motivated to do well in their classes. These more positive attitudes helped students attend school more regularly, get in trouble at school less often, and ultimately get better grades.

What can schools learn from your study?
Many good teachers already do many of the things that our intervention is designed to convey to kids. For example, a good teacher can provide messages of reassurance and offer help to those students who are struggling socially or academically. However, teenagers are often more attentive to the advice of a peer and, therefore, we believe that the messages that are delivered by our intervention are powerful because they come from the stories of other students.

Schools might also arrange peer mentoring programs. These programs, delivered by student peers who successfully navigated the middle-school transition, might deliver messages that are similar to those found in our intervention materials.

How much would it cost for schools to implement your practices?
Researchers from Columbia University recently estimated the costs of six popular programs targeting students’ social-emotional learning (SEL). On average, these interventions cost $581 per student. One of these six interventions was being used in the school district we studied. The students who received our intervention, in addition to the SEL program, outperformed the control group students, who received only the SEL program. The value-added of our intervention on students’ outcomes was achieved at a cost of about $1.35 per student. This cost factors in the printing costs for the materials and for the time that it takes teachers to administer the two 15-minute activities.

Anything parents can learn from your study?
First, if the option is available, parents may enroll their students in K-8 schools and avoid the difficult middle-school transition altogether! Second, parents should encourage their middle-schoolers to develop positive relationships with their teachers and to ask them for help when needed. One very significant impact of our intervention was that students felt more comfortable with, and trusting of, their teachers. Third, parents can help their children understand that teachers are caring adults who will help if needed. Finally, though middle-schoolers are beginning to become more independent, parents should reassure their children that they are there for them when things get difficult.

The original version of this story misstated Geoffrey Borman’s last name in one instance. It is Borman, not Boorman.

The original version of this story misstated the state where the PNAS study took place. It was Wisconsin, not Arizona. 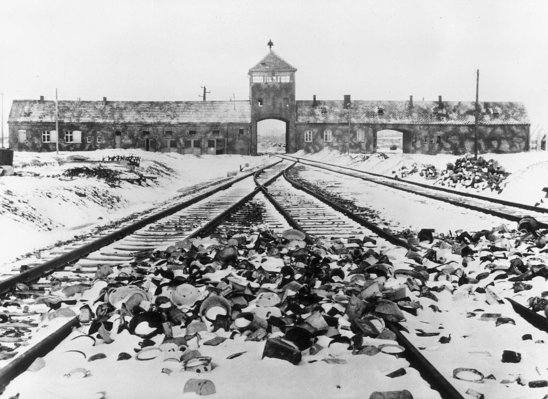 The Remarkable Story of the Man Who Volunteered to Enter Auschwitz and Try to Tell the World About It
Next Up: Editor's Pick