What Boris Johnson's Premiership Means for Brexit and the U.K.

Newly elected Conservative party leader Boris Johnson poses outside the Conservative Leadership Headquarters on July 23, 2019 in London, England. Johnson officially took office as Prime Minister of the UK Wednesday morning.
Dan Kitwood—Getty Images
Ideas
By Ian Bremmer
Bremmer is a foreign affairs columnist and editor-at-large at TIME. He is the president of Eurasia Group, a political-risk consultancy, and GZERO Media, a company dedicated to providing intelligent and engaging coverage of international affairs. He teaches applied geopolitics at Columbia University’s School of International and Public Affairs and his most recent book is The Power of Crisis

Boris Johnson became the United Kingdom’s Prime Minister this week. The former London mayor and foreign secretary assumed the U.K.’s premiership with a mandate to lead the U.K. out of the E.U. He has promised to secure a better Brexit deal with Brussels than his predecessor, Theresa May. He has also promised to pull the U.K. out of the E.U. by the October 31 deadline, deal or no.

Because the UK is heading into the biggest peacetime political crisis in generations, and the person leading his country into the great unknown must corral a British public and political class that has never fundamentally agreed on what form Brexit should take—Hard Brexit, Soft Brexit, No-Deal Brexit or anything in between.

In Boris Johnson, that task has now fallen to someone who can charitably be described as Britain’s most divisive politician. Johnson himself has taken a hardline stance on Brexit, which he needed to do in order to win over the Conservative party membership and become Prime Minister. It was a strategy that worked, as 66 percent of Tory members selected him over his more-centrist rival. There are those who still harbor hope that Boris’ hardline approach to Brexit and Brussels is more bluster than anything else; Boris has a well-deserved reputation for political opportunism. But even if that’s the case, renegotiating a deal with EU leaders is an uphill battle—the EU is adamant that it is done negotiating, and the deadline is less than 3 months away. Complicating matters even further, Johnson has spent decades taking swipes at EU leaders and Brussels… the same kind of EU leaders who he now needs to play ball with.

Within 48 hours of assuming the premiership, Johnson had dismissed a significant portion of Theresa May’s cabinet, replacing most of them with hardline Brexiteers. But while his cabinet might be filled with folks pushing for a no-deal Brexit should it come to that, the same cannot be said for the whole of his party—there are a number of members who find the very idea of a no-deal Brexit (and the chaos that will inevitably follow) abhorrent, and multiple Tory members of parliament have indicated they will do what it takes to stop that from happening, even while Johnson tries to use the threat of no-deal Brexit as leverage in negotiations. Brussels, for its part, has refused to renegotiate the substance of the Brexit deal that it struck with Theresa May—because of the logistical difficulties involved, and because the political optics of backing down to the UK (and one led by Boris Johnson no less) make that extremely unappealing. Which means the likeliest scenario we’re looking at is UK general elections in the fall, potentially triggered by Tory party members who would rather see their own Conservative government fall than see a no-deal Brexit come to pass.

According to a YouGov survey done back in April, just 25 percent of people in the U.K. would consider a no-deal Brexit a “good outcome”; another 13 percent would find it “an acceptable outcome”. 50 percent were flat out against it, and another 12 percent weren’t sure. In other words, a winning strategy for the Tory party leadership race is quite different from winning a general election race. Boris won the battle, but the war still lays ahead.

You don’t become one of the most colorful politicians on the world stage without having a fascinating backstory—this is Boris Johnson’s.

The One Thing to Watch About It:

The Brexit saga has dragged on so long it’s sometimes hard to remember how the UK got here; I’ve got you covered.

Roughly three years after both the Brexit referendum and the election of Donald Trump, UK politics continue to be more dysfunctional than US politics. That’s remarkable. Also, if you’re British, quite sad.

Boris Johnson isn’t the PM a divided U.K. needs… but it’s the one it deserves. 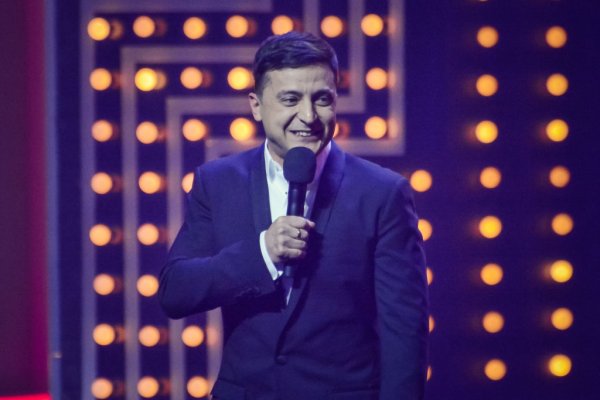 Sweeping Political Change in Ukraine Heralds Hope for the Future
Next Up: Editor's Pick