The man who created a fake presidential seal that President Donald Trump stood in front of at an event earlier this week is a former Republican who grew disillusioned with his party after the 2016 election.

Charles Leazott, 46, is a graphic designer who made the doctored seal shortly after Trump was elected, according to the Washington Post. His spin on the seal features a two-headed eagle—taken from the Russian coat of arms in reference to Trump’s history and relationship with the country—clutching a set of golf clubs and a wad of cash, in lieu of the traditional arrows and olive branch. Instead of using the U.S.’s Latin motto, Leazott wrote in Spanish: “45 es un titere,” which means “45 is a puppet.”

“This is the most petty piece of art I have ever created,” Leazott told the Post.

Leazott, a former Republican who voted twice for President George W. Bush, said he hadn’t really thought about the seal in the years since he created it––until this week. The image became a viral sensation when it appeared behind Trump at the conservative group Turning Point USA’s Teen Student Action Summit. The Post first reported that the seal was doctored and that neither TPUSA nor the White House knew how it made it to the screen. It was only after the story made its way to Reddit that Leazott realized his seal had reached a larger audience than intended.

CNN reports the audiovisual aide responsible for including the image was fired following the incident. Representatives for TPUSA did not immediately respond to TIME’s request for comment. A spokesperson told CNN that the mistake was a result of a Google Image search gone wrong.

The image can be seen at an online marketplace made by Leazott, according to the Post. It appears along with other items that mock Trump, including hats and stickers. Leazott said T-shirts bearing the fake seal were sold out as of Thursday.

While TPUSA claims the appearance of the fake seal was an unintentional mistake, Leazott has only admiration for the person who posted it.

“I am so tickled in the most petty way possible that the president of the United States, who I despise, stood up and gave a talk in front of this graphic,” he said. “Whoever put that up is my absolute hero.” 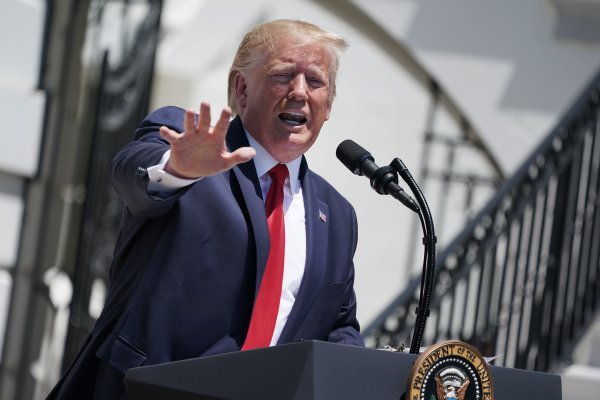 After Failures, Trump Tweets
Next Up: Editor's Pick