Russia's Version of #MeToo Has Struggled to Take Off — Until Now

For the last 10 days, thousands of Russians have flooded social media with new hashtags to challenge sexual harassment and violence against women. On July 16, Twitter users started posting their experiences of sexism and sexual harassment using the #мне_нужна_гласность (I Need Openness, or I Need Public Attention). A few days later, Instagram users began posting images of themselves with the hashtag #янехотелаумирать (I Didn’t Want to Die).

The campaigns come nearly two years after the #MeToo movement soared to prominence in the U.S., a rallying cry for survivors of sexual violence and harassment. The phenomenon has since reverberated globally. From Marrakesh to Manila, Tokyo to Toronto, women have been speaking up. According to the New York Times, more than 200 high profile people have lost their jobs, like Charlie Rose from CBS and Roy Price, Head of Amazon Studio. In France, #MeToo galvanized support for passing comprehensive legislation to tackle violence against women. In Morocco, the movement helped pave the way for bans on forced marriage and sexual violence. Thanks to campaigning by #MeToo activists in China, the government announced proposed legislation that would ban sexual harassment and require that employers “take reasonable measures” to prevent it.

While there have been several attempts in Russia to raise awareness of #MeToo and other issues affecting women, none have gained significant traction or had the backing of politicians. But Russian women haven’t given up.

Does Russia need a #MeToo movement?

The situation for women in Russia is getting worse, activists say. At least 40,000 women are affected by domestic violence each year, and at least 12,000 women are dying at the hands of their abusers annually, according to Russian government statistics, cited by the U.K. government.That’s about 33 women per day, 20 times the U.S. fatality rate. Russian family lawyer Mari Davtyan says these estimates are conservative, since much of the abuse goes unreported.

That’s why human rights activists Alexandra Mitroshina and Alena Popova started the “I Didn’t Want to Die” hashtag. They want the government to introduce laws punishing perpetrators of domestic violence, and legislation to better protect victims. Mitroshina posted an image of herself wearing makeup to depict cuts and bruises on Instagram on July 20, hoping to raise awareness about domestic violence.

By July 25, the post on Instagram had more than 430,000 likes and led 7,000 other users to post similar images using the hashtag. “As it stands, there’s no protection for victims. We need as much public outcry as possible,” says Mitroshina.

In January 2017, Russian president Vladimir Putin signed a law decriminalizing domestic violence that does not cause serious injury with “serious” defined as an injury that requires hospital treatment. Since it was adopted in February 2017, beatings that leave bruises, scratches, or bleeding, but that do not cause broken bones or a concussion, are no longer a criminal offense. Yulia Gorbunova, Russia researcher at Human Rights Watch says it’s a “a huge step backwards for Russia, where victims of domestic violence already face enormous obstacles to getting help or justice.” Family lawyer Davtyan says the measure has made it “much harder” to protect abuse victims.

Although the Russian government has laws in place against sexual violence, rape is rarely reported to the authorities, says Davtyan. She says there are no reliable statistics showing what percentage of rape incidents are reported to the police, but only half of those accused result in a court case.

Meanwhile, there are no laws tackling workplace sexual harassment, including inappropriate sexual remarks or physical advances, leaving Russians with limited legal resources to charge someone or even file a complaint.

Known by her Twitter handle @teacat_w, an Internet blogger started the “I Need Openness” hashtag last week. (She asked to remain anonymous, fearing for her safety.) She says she wants “to give women a chance to be heard, and to make people aware about how often women experience sexual harassment.”

Why hasn’t #MeToo taken off?

Activists say sexist attitudes and a culture of victim-blaming is strong in Russia, where the old proverb “if he beats you, it means he loves you” is still used. According to Davtyan, the overarching attitudes imply women are to blame for not acting properly. The Russian public doesn’t consider gender-based violence to be “a problem”, she says. That contributes to the majority of women not reporting incidents of abuse, says Davtyan.

Women who have come forward to share accounts of domestic violence and sexual harassment online often face criticism. Mitroshina says she’s rеceived many negative comments and messages on social media. “Why didn’t you just marry a normal guy, instead of an asshole?” commented one user.

That negative reaction online makes it harder for feminist movements to gather steam. @Teacat_w says “Women are afraid of publicity and the condemnation afterwards.The fact that campaigns are still small, compared to other countries, shows they are still afraid.”

Nor can women take to the streets to publicly protest the status quo. Peaceful or not, any form of public outcry — a protest or even a meeting — needs to be authorized by the government. Over the past few years, Russia has introduced a slew of laws punishing protestors. Since 2014, anyone caught in an unsanctioned protest more than once in a six month period risks being fined anywhere between 600,000 to one million rubles ($17,124 to $28,540), or up to give years of forced labor or prison. For instance, last August, dozens of LGBT rights activists were arrested during a banned protest in St Petersburg to promote the rights of sexual minorities.

“Activists are beaten, threatened. Nothing good comes from it,” says @teacat_w. She cites the recent murder of LGBT activist Еlena Grigorieva in St. Petersburg, Russia. Grigorieva’s body was discovered on Sunday night in a southern suburb in St. Petersburg. She’d been strangled after being stabbed eight times in the face and back.

In a post on Facebook on Monday, activist and friend of Grigorieva, Dinar Idrisov, wrote “She had recently been the victim of violence and death threats,” adding that she had filed several complaints with the police. Authorities have not confirmed the reports of death threats or that Grigorieva’s death was linked to her activism.

How have politicians responded to the issue of violence against women?

Davtyan says sexist attitudes have intensified in the past 10 years thanks to a rise in conservative nationalism under Putin, who has been the country’s de facto president since 2000. “Politicians are not on our side,” Davtyan says.

The conservative MP Yelena Mizulina, who proposed the 2017 law decriminalizing domestic violence, said it helped preserve family traditions that are “built on the authority of the parents’ power” and that they shouldn’t be “branded a criminal” for slapping their children. She also stated publicly that women “don’t take offense when they see a man beat his wife” and that “a man beating his wife is less offensive than when a woman humiliates a man.”

Meanwhile, accusations of sexual abuse against high-profile perpetrators have not been taken “seriously” by politicians, says @teacat_w. When five female journalists accused Russian lawmaker Leonid Slutsky of sexual harassment in March 2018, the parliamentary ethics committee dismissed the accusations and said they may have been coordinated to tarnish the politician’s reputation. In March last year, a spokeswoman from the Foreign Ministry said in a televised interview that Slutsky had said “very unpleasant” things to her, but has since denied published reports that she too accused him of sexual harassment, and she now says he never harassed her. The charges sparked a small movement similar to #MeToo called #небоюсьсказать (Not Afraid to Say), which was also used in Ukraine.

But Slutsky responded to the allegations as follows: “I don’t feel people up. Well, OK, just a little. ‘Feel people up’ is an ugly expression.” He later boasted that he prevented the #MeToo movement from coming to Russia. And in response to the accusations, the Head of Russia’s Committee on Family, Women, and Children, Tamara Pletnyova, said “these girl journalists should look more decent, put clothes on themselves when entering a state building, instead of having their belly buttons naked” in a March 2018 interview with a Moscow-based radio station, Ekho Moskvy.

At the highest level of Russian politics, the #MeToo campaign has been ridiculed or dismissed. In June 2018, Putin said he didn’t support the movement. A few months earlier, Kremlin spokesperson Dmitry Peskov had called it “something of a fashion statement and accused Hollywood stars of using the movement “in order to become celebrities.”

The highly influential Russian Orthodox Church has echoed the views of politicians. The head of the Church, Patriarch Kirill called feminism a “dangerous phenomenon” and Archpriest Vsevolod Chaplin said a woman’s “indecent” and “provocative” appearance is to blame for rape.

But activists are still hopeful.Davtyan believes “public attitudes are changing” in favor of women. “We’re seeing more coverage [about violence against women ]in the media than ever before,” she says. How much support the latest social media campaigns will attract, and how politicians will respond to activists’ demands is unclear. What is certain, says @teacat_w, is that “the more women talk, the more women will talk.” 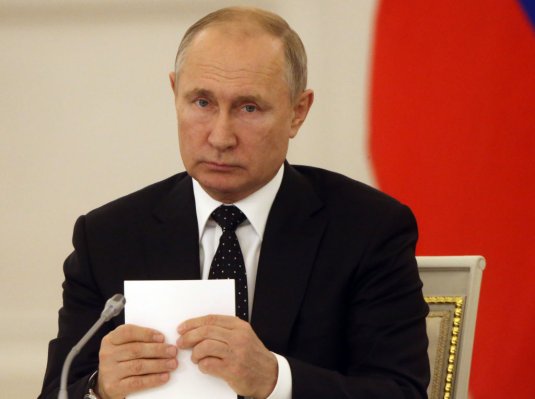 'Liberalism Is Obsolete,' Putin Says Amid G20
Next Up: Editor's Pick