Mueller's Testimony Didn't Shift the Debate on Impeachment. But the Issue Isn't Going Away

Former Special Counsel Robert Mueller makes an opening statement before testifying to the House Judiciary Committee about his report on Russian interference in the 2016 presidential election in the Rayburn House Office Building July 24, 2019 in Washington, D.C.
Chip Somodevilla—Getty Images
By Alana Abramson

In the wake of Robert Mueller’s hotly anticipated Congressional testimony, one thing was clear: House Democrats will continue to wrestle with the question of impeachment— even as some believe the window to pursue it gets increasingly smaller.

In the four months since the former special counsel submitted his report on Russian interference in the 2016 election, the number of Democratic lawmakers pushing for an impeachment inquiry has jumped to nearly 90, according to a count from the New York Times. This was partially due to the contents of the report, particularly the 10 instances Mueller laid out where he alleged President Donald Trump may have tried to obstruct the investigation But the push also came from the way the White House has been stonewalling Congress, preventing high-profile witnesses from producing documents and testifying at hearings.

“I do believe that what we saw today was is very strong manifestation in fact some would even say indictment of this administration’s cone of silence in their coverup,” House Speaker Nancy Pelosi said after the hearing on Wednesday.

But Pelosi’s confidence about the outcome hearing, which was hardly a blockbuster — Mueller, who often spoke shakily and softly, hardly made for compelling television — belied the tensions within the caucus on how to move forward now that this chapter has officially closed. Liberal activist groups were clearly hoping that Mueller’s testimony would push Pelosi, her deputies and other Democrats resistant to impeachment on board. But the biggest revelation from his testimony was his staunch assertion that Russians and other foreign adversaries would attempt election interference in 2020; damning, to be sure, but hardly ripe ground for impeachment. In the aftermath of Mueller’s testimony, several Democratic members of Congress, including the sixth highest ranking member, Democratic Caucus Vice Chair Katherine Clark, came out in favor of an inquiry, but it was not a massive wave.

“Most people feel that we didn’t get the ‘made for TV moment’ that folks seemed to want,” said one House Democratic aide.

Pelosi, who has remained steadfastly opposed to the idea of impeachment, stood firm on Wednesday when asked if her stance had changed. “My position has always been, whatever decision we made in that regard would have to be done with our strongest possible hand, and we still have some outstanding matters in the courts,” she told reporters. “Its about the Congress, the Constitution, and the Courts. And we are fighting the President in the courts.”

The Speaker and her committee chairs leading the investigations who appeared alongside her on Wednesday — Judiciary’s Jerrold Nadler, Intelligence’s Adam Schiff, and Oversight’s Elijah Cummings — emphasized that the best way forward was to continue on that concurrent path of investigations and court cases. To that end, Nadler announced his committee would go to court to obtain the grand jury material from Mueller’s report, and to enforce the subpoena against former White House Counsel Don McGahn. At the direction of the White House, McGahn had refused to comply with a subpoena to testify before the committee. (McGahn’s attorney declined to comment on the announcement). On Thursday morning, Cummings’ committee voted to subpoena emails and texts White House officials had sent on their personal accounts discussing official business, alleging that such actions are violations of both federal law and official White House policy.

While the number of lawmakers supporting impeachment continues to grow, it still remains far from a majority. But there is reason to think agitation among members supporting it and a restless grassroots movement could still have tangible implications. Right before Pelosi and the committee chairs briefed reporters Thursday, she and other members of the Democratic caucus huddled in the basement of the Capitol to discuss the implications of the hearing. The issue of impeachment inevitably came up, according to two sources in the room. Nadler, who oversees a committee where the majority of Democrats are in favor of an inquiry, said that committees could start the impeachment process independent of a House vote, according to the sources. Representatives for Nadler did not respond to request for comment. But Nadler had previously broached the topic with Pelosi of starting an inquiry, only to have it rebuffed.

Pelosi has not yet ruled out impeachment, she just has not deemed it the best path, particularly when Trump would almost inevitably be cleared in the Republican-controlled Senate, raising the prospect that it would be viewed solely through a partisan lens. But, for those advocating for it, the clock is quickly running out. Lawmakers leave Friday for six-week recess, and it is only a matter of time until the national conversation shifts to the 2020 Presidential election.

“[Mueller] did his job—and it’s far past time for lawmakers to do theirs. No more excuses and no more delays,” said Sean Eldridge, Founder and President of Stand Up America, a grassroots group pushing for impeachment. “Waiting any longer to start an impeachment inquiry does an injustice to the American people and will only further embolden Donald Trump.” 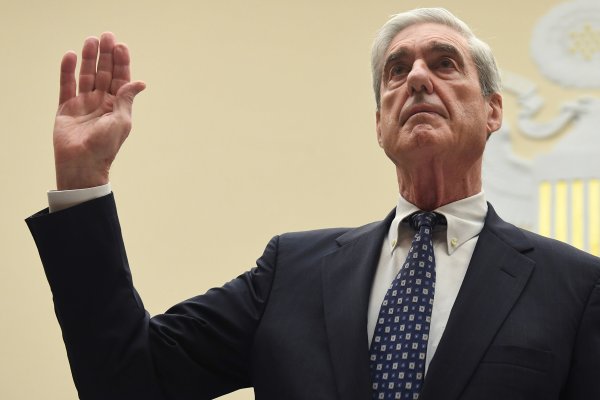