Illustration by Bethany Bickley for TIME
Ideas
By Jamie Lee Curtis
Curtis is an award-winning actor and a best-selling children's book author.

You can’t clean people up. You can’t organize them or kiss them goodbye, thanking them for their service when they no longer spark joy in your heart. There are these nagging, inconvenient things called feelings attached to people that you can’t bundle up in little boxes or toss.

Decluttering is a fruitless fad. It’s a reaction to the confluence of all our technology-enabled connectivity and the gnawing feeling that we are wildly out of control of our bodies–overpowered by drugs and obesity–and as a planet, burdened with the fear that we’re one angry tweet away from nuclear war. By focusing on the order within our homes, we’re missing the point: life is messy, and so are people. Trying to manufacture control over either is a symptom of our desperation.

These themes are explored in Hallie Ephron’s new thriller, Careful What You Wish For, a novel set in the surprisingly treacherous world of professional organizing. It’s funny that I would be asked to write about it, for a couple of reasons.

First, I was a neatnik long before the arrival of Marie Kondo. I followed the very tidy path my late mother laid out that neatness in the physical world meant a neat and ordered mind. I fed that thin broth to my children, and attempted to do so to my husband. When they all revolted, I was encouraged to look at it more objectively. What was I trying to protect them (and myself) from? What was so scary about disorganization? I wrote about Kondo for the TIME 100 list of the world’s most influential people in 2015. I participated in a public talk during which I pressed her, a new mother, on what to do with the myriad paintings and crayon drawings, the abundance of art and beauty a kindergartner brings home and which most of us put up on our refrigerators, when her own child was still producing messes of a different kind. She suggested we photograph everything that doesn’t spark joy and then toss it. I think I pulled a face, to the horror of the audience.

Second, you might be surprised to hear that I don’t like mysteries. Life is terrifying enough without trying to identify the perpetrators of crimes and how they pulled them off. I hate watching horror films (I know, I know) or anything scary. I try to leave all that to audiences who enjoy them.

Careful What You Wish For is Ephron’s seventh work of stand-alone suspense fiction.

But Careful What You Wish For is not scary–it’s thrilling and suspenseful. Protagonist Emily and her best friend, Becca, declutter for a living through their two-person company. They’ve tasted viral fame on a tiny scale–for satisfying tidying videos–but fame is a gateway drug (trust me), and in the book, it’s the first sign of trouble to come.

Emily is married to a hoarder, a case of opposites who’ve attracted. In their union, there’s plenty of opportunity for budding resentment, as well as more menacing problems. When Emily and Becca take on two new clients on the same day, they don’t realize they’ve stepped into a mess that smells like a rat–or something dead.

Ephron’s dank and musty storage units offer perfect settings for the piecing together of the puzzle, one made of human pieces in various sinister shapes and sizes. Ephron, sister to writers Delia and Amy and the late Nora, deftly builds these tensions, and offers readers the pleasure of unraveling the mystery in a way they will relish. I laughed more than I expected to, related to quotidian elements like overpacked closets, and let myself be carried along on this nightmare of a trip. I anticipated bad guys where there weren’t any, and thought I’d figured it out when I hadn’t. The red herring smelled fishy to me. The marital dances were familiar yet fun. And I found a compelling companion to Emily, a modern-day grown-up Nancy Drew in a sh-tty car and a ponytail, as she searches for her own purpose while hunting down the perpetrator of the emerging crime. She is a friend we would all want to keep–messes included. 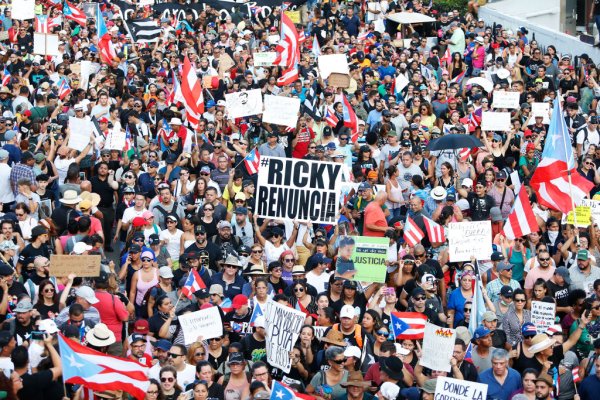 The Governor of Puerto Rico Dismissed the People. But the People Refused to Be Dismissed
Next Up: Editor's Pick