The Governor of Puerto Rico Dismissed the People. But the People Refused to Be Dismissed

Thousands of demonstrators protest against Ricardo Rossello, the Governor of Puerto Rico July 17, 2019 in front of the Capitol Building in Old San Juan, Puerto Rico.
Jose Jimenez—Getty Images
Ideas
By Zaire Dinzey-Flores
Professor Dinzey-Flores is an associate professor at Rutgers University in the Department of Latino and Caribbean Studies and the Department of Sociology. She is the author of Locked In, Locked Out: Gated Communities in a Puerto Rican City.

On July 11, Puerto Rico’s Centro de Periodismo Investigativo journalists began releasing what would turn out to be 889 pages of a private chat between Governor Ricardo Rosselló and 11 male allies and members of his administration whom he referred to as his “brothers.” The chat now being referred to as “Chatgate” or “Rickyleaks” contained arrogant, misogynistic, homophobic commentary on political and interpersonal affairs.

Among the chats’ targets are groups like Colectivo Feminista en Construcción, which had been staging protests in front of the Governor’s Mansion (Fortaleza) decrying gender violence and femicide in Puerto Rico. The chat room buddies repeatedly mock this and other organizations and individuals. One particular phrase — #4Gatos — stands out. As the men discuss a Colectivo protest from a bridge in San Juan, one member of the group shares a write-up of the demonstration and uses the hashtag #4Gatos.

The implication was clear.

Four cats. In other words, nothing to worry about.

It’s easy to miss in such an extensive report, one that also underscores the widespread corruption that has characterized Rosselló’s administration, but this simple hashtag speaks volumes. The political elite has long been dismissive of those outside their ranks – the marginalized, the poor, the untrained. As in other parts of the Americas, Puerto Rico’s governors and administrations have largely been drawn from privileged classes who have a paternalistic disdain for the public who they see as easily fooled and incapable of knowing what’s good for them.

When I interviewed low-income Puerto Ricans living in public housing more than a decade ago for my book Locked In, Locked Out: Gated Communities in a Puerto Rican City, these humble citizens refused to comment on matters beyond their immediate community. This tendency significantly contrasted to the response I received from those communities who were better off. Upper and middle classes readily opined on what was happening locally, island-wide and globally. In the book I argued that the upper classes had a sense that they knew best and that they believed their knowledge would and should guide public policy and social mores. They evinced a class and race privilege that actively undermined the position of darker working classes in defining their own and others’ realities.

This attitude hasn’t changed even as protests have become more frequent in recent years, with the opposition to the defunding of public higher education, the privatization of public services and the austerity measures brought on by a fiscal board appointed by Congress in 2016 to combat an economic recession. Students, workers and organizations that have protested in the past have often dubbed instigators and outcasts. Rossello even reportedly told members of his party that the protesters were financed by socialists in the U.S. and Venezuela, a claim for which he has shown no evidence.

Now Chatgate has resulted in more than a week of demonstrations on the island and across the diaspora. The protests represent an ascending dissatisfaction and indignation for the way Puerto Rico and Puerto Ricans have been mismanaged and mishandled, including in the aftermath of Hurricane Maria. On Monday, a general strike recorded estimates of more than 500,000 in a march that blocked a main vehicular artery in San Juan. El Rey Charlie, a social media celebrity, took to the streets to lead thousands of people in motorcade from public housing developments to the capitol. While Rossello, the U.S.-educated Ph.D. son of a two-term governor of Puerto Rico, held on to office, Rey Charlie and his motorcade, like those who protested before and were dismissed, were similarly unwavering, continuing to point out that the emperor has no clothes. In fact, in an interview with Fox News’ Shep Smith, Rosselló had trouble coming up with a single name of someone who supports him.

It is impossible to deny how badly the governor and his cohort misjudged the people they were supposed to serve. The protesters are still going strong, unwilling to rest until their calls of #RickyRenuncia become a reality.

Indeed, the cats have propagated. 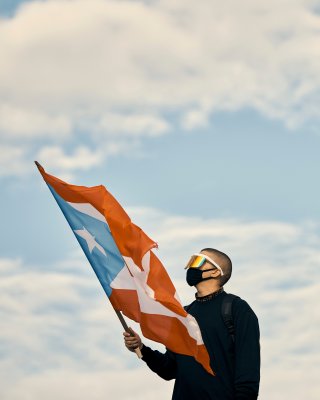 Hundreds of Thousands of Protesters Expected in Puerto Rico as Gov. Ricardo Rosselló Says He Won't Resign. Here's What to Know
Next Up: Editor's Pick