Here Are the 11 New Books You Should Read in August

Both intrinsically timeless and timely, memory shapes who we are and how we think of the world around us. But what happens when catastrophe strikes and remembering becomes difficult? How do we reckon with forgetting, which can come as a welcome relief in times of crisis? And what do we do when collective and personal memory collide? Many of the characters in and authors of the best books of this month are faced with these poignant questions.

In The Yellow House, author Sarah M. Broom must reimagine her concept of home after her family’s house is destroyed by Hurricane Katrina. For the characters in Nell Zink’s Doxology, living in the world after 9/11 makes everything that came before it feel very far away. And from award-winning writers including Yoko Ogawa and Ibram X. Kendi to debut author Jia Tolentino, these books ask readers to consider their own histories, however complicated they might be. Here, the 11 new books you should read in August.

In Summerlings, the Cold War is casting an ominous shadow over 8-year-old John’s otherwise normal suburban childhood in Washington, D.C. John and his two best friends spend their days catching insects and riding their bikes, until a tragedy erupts on the night of a party at his grandparents’ house.

The events that follow prove to be formative for John, as the incident’s consequences are set in motion alongside the truths they reveal about people he thought he knew.

New Yorker staff writer Jia Tolentino offers incisive commentary on the world around us in her debut essay collection. The nine pieces in Trick Mirror cover everything from the pervasiveness of scam culture (for example, the now-infamous Fyre Festival) to Tolentino’s stint on a reality television show as a teenager.

By picking apart popular culture and its impact on us all, Tolentino questions her own path as writer, exploring the ever-evolving relationship between the Internet and identity.

The title of Sarah M. Broom’s debut memoir refers to the east New Orleans home her mother bought in 1961. There, Broom was raised alongside her 11 siblings in a part of the city that became riddled with crime and poverty. In The Yellow House, Broom traces back a hundred years worth of her family history and the hardships they faced.

She pays particular attention to Hurricane Katrina, which completely destroyed the family’s house. In its aftermath, Broom examines what it really means to rebuild roots and how to define a home.

How can we work together to live in a society that fully understands its racist roots? National Book Award winner Ibram X. Kendi posits the question in How to Be an Antiracist, which analyzes racism through several different lenses, including biology, ethnicity, culture and more. Kendi leads a complicated, but necessary conversation about racial justice, picking up where he left off in his best-selling book Stamped from the Beginning.

As the founding director of the Antiracist Research Policy Center at American University, Kendi shares both his personal story and expertise on the ways in which we can build a world that rejects inequality.

In her follow up to National Book Award finalist The Tiger’s Wife, Téa Obreht takes readers to the unsettled American West of 1893. Inland navigates the lives of two characters: Nora, a frontierswoman and Lurie, a former outlaw. Nora is waiting for her husband to return to the Arizona Territory while Lurie believes he is being haunted by ghosts. As their narratives and journeys meet, Obreht deftly examines the impact of grief, betrayal and survival.

Slowly but surely, everything is disappearing in award-winning author Yoko Ogawa’s latest novel. The dystopian story is centered around an unnamed female novelist who is living in a society in which objects, ranging from roses to calendars, are no longer physically present. For most people, the items are psychologically lost, too, thanks to the cruel work of the Memory Police.

But the protagonist’s editor still has the ability to remember, leading her to help hide him from the authorities. As the novelist tries to keep her editor safe, Ogawa crafts a powerful story about the processing of loss and the importance of memories.

Drive Your Plow Over the Bones of the Dead, Olga Tokarczuk (8/13)

Janina Duszejko lives in an isolated Polish village where she translates poetry, studies astrology and much prefers interacting with animals over humans, leading her to have developed a strange reputation among her fellow locals. But in Drive Your Plows Over the Bones of the Dead, mystery ensues as Janina discovers the body of a neighbor — and there are more deaths to come.

A finalist for the 2019 Man Booker International Prize, the thriller follows the eccentric protagonist as she decides to get involved with police investigations of the crimes.

Everything Inside: Stories, Edwidge Danticat (8/27)

In Everything Inside, National Book Award finalist Edwidge Danticat uses eight short stories to dissect the family unit, diving into marriage, parenthood and young love. The collection tests the strength of familial bonds as characters deal with tragedies of all sizes. Danticat takes readers to her birthplace of Port-au-Prince, Haiti, as well as Miami and an unnamed part of the Caribbean in these narratives that probe the intersections of community, compassion and loss.

Hacker Lisbeth Salander is back for a sixth installment of the crime-fiction series, which began with The Girl With the Dragon Tattoo. Author David Lagercrantz takes Lisbeth on another dangerous journey in The Girl Who Lived Twice, teaming up again with journalist Mikael Blomkvist, who needs her assistance in uncovering the identity of a dead man. The two work together towards exposing the truth and, in doing so, Lisbeth hopes to finally escape her past.

Nuclear war. Climate change. Natural disasters. There are many ways that the world could come to an end, and science reporter Bryan Walsh investigates several pressing possibilities in his new book End Times. Walsh interviews people at the forefront of many industries — from government offices to NASA to research labs — working to avoid global catastrophes.

Through his findings, Walsh furthers our understanding of what an apocalypse might look like and digs into the biggest threats facing our world.

Nell Zink’s latest novel follows two generations of a family from the 1990s through to the 2016 election. The first half of Doxology is focused on Pam and Daniel, members of a punk band in New York City, as they struggle to make it in the music industry. They end up falling in love and having a baby, Flora, who they must learn to raise in a post-9/11 world. Flora’s coming-of-age is at the core of the latter half of the book, where her passion for the environment leads her to working for Jill Stein’s presidential campaign.

Through Pam, Daniel and Flora, the National Book Award finalist is able to take a distinct, unflinching look at the country’s past and future. 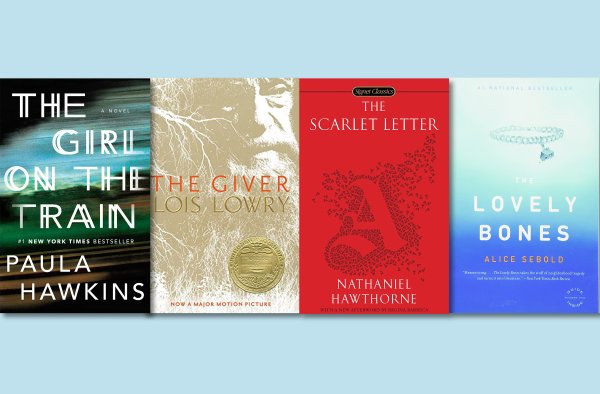 7 Books That Were Better Than Their Movie Adaptations
Next Up: Editor's Pick