Behind the Scenes of the Moulin Rouge! Musical With Its Star Costume Designer

By Raisa Bruner | Video By Anne Most | Lauren Bogholtz |

The labyrinthine backstage halls of the Al Hirschfeld Theatre on Broadway, now home to Moulin Rouge! The Musical, are filled with the rustle of tulle and chiffon. In a basement room, Tony Award-winning costume designer Catherine Zuber and her associate designer Wilberth Gonzalez and assistant designer AC Gottleib are fitting Amber Ardolino in a custom corset. Even her fishnet tights, velvet gloves and character dance shoes get a close look. Ardolino is a “swing” — an understudy ready to step in at a moment’s notice for any actress — but every element of her many outfits gets the same attention as that of the show’s stars, Aaron Tveit, who plays Christian, and Karen Olivo, who plays Satine.

This is no small task for a show that requires ensemble costume changes in nearly every scene, and outfits that must withstand rigorous choreography to songs like Lady Gaga‘s “Bad Romance” and Sia‘s “Chandelier.” Those are just two of the notable musical updates to the new show, which is based on Baz Luhrmann‘s vibrant 2001 jukebox musical film of the same name. The stage show, directed by Alex Timbers, opens July 25 in New York after a limited run in Boston in 2018.

Zuber, who has worked in costume design for decades and most recently won Tonys for her work on shows including 2018’s My Fair Lady and 2015’s The King and I, is not daunted by the task of bringing the raucous glamour of the famed Moulin Rouge cabaret to life. Zuber studied costume design at the Yale School of Drama and has earned 14 Tony nominations to date. For this show, she worked with specialists in New York, Connecticut, London and Germany for each costume, all based on her fastidious sketches.

“It’s not period accuracy at all, but it feels like it could be,” she explains to TIME of her approach. “It’s not what the Moulin Rouge was actually like at the time. It’s a fantasy of maybe what it could have been.” Zuber believes the inclusiveness of that fantasy, from the show’s diverse casting to its breadth of influences, is what speaks to audiences. Her designs mix art historical references — like the stately portraits of John Singer Sargent and the impressionistic cabaret scenes of Henri de Toulouse-Lautrec — with more modern twists that echo the contemporary music mixed into the show, from Madonna to Beyoncé to Katy Perry. “One of the goals in the costumes was to bring an element of the Moulin Rouge, of Paris, of the Belle Époque, and also a sensuality and a sense that these are artists and people who have a passion and a commitment to their lifestyle and what they believe in,” Zuber says. Other inspirations include My Fair Lady, Marlene Dietrich and Vaudeville, which converge to make a “wonderful mélange,” as Zuber puts it. “A delightful salad of entertainment.”

And then there are the technical details that make the costumes shine onstage. One gown for Satine is decorated with over 3,500 Swarovski crystals, each hand-placed onto the garment by Gonzalez. There are hidden magnetic clasps for seamless mid-scene quick-changes and special supports for shoes that take a beating. There’s a wardrobe assistant whose job is to make sure that all the hosiery is holding up.

“It’s always great for any costume designer to see when the actor becomes the character and embraces their costume,” Zuber says. “And when they let you know that the costume you gave them really helps them be that character? That’s always so thrilling.” Explore the Moulin Rouge — a lavish tribute to the bohemian ideals of truth, beauty, freedom and love — in TIME’s behind-the-scenes look, above. 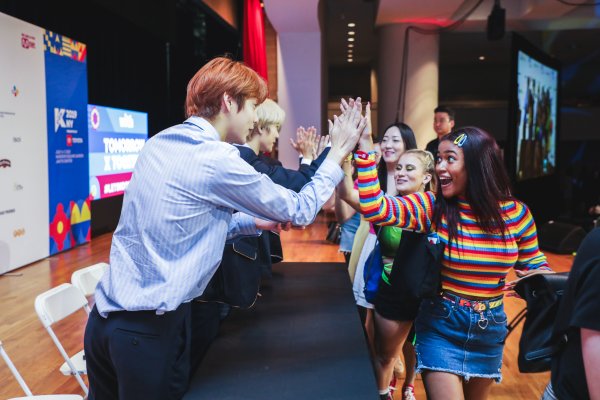 ‘I Waited Eight Years.’ Meet the K-Pop Superfans Who Spent Their Savings to Meet Their Favorite Idols
Next Up: Editor's Pick