Military vehicles and equipment, parts of the S-400 air defense systems, are unloaded from a Russian transport aircraft, at Murted military airport in Ankara, Turkey on July 12, 2019.
Turkish Defence Ministry via AP
By Madeleine Joung

During his two and a half years in the Trump Administration, Mike Pompeo has mostly managed to stay on President Donald Trump’s good side, even as other senior officials have come and gone. But the Secretary of State’s relationship with the President is now being tested after an apparent split over whether or not to further punish Turkey for buying an advanced Russian missile system.

Turkey, a NATO ally since 1952, is now receiving parts for Russia’s S-400, an advanced mobile surface-to-air weapon system designed to detect and shoot down aircraft and missiles up to 155 miles away.

Pompeo has publicly stated that Turkey’s purchase ran afoul of a 2017 law meant to punish Russia for election meddling and the Crimea annexation. “The law requires that there be sanctions,” Pompeo said on July 14. “And I’m confident that we will comply with the law, and President Trump will comply with the law.” That assertion was supported by the top Democrats and Republicans on the Senate Foreign Relations and Armed Services Committees, as well as the House Foreign Affairs Committee.

But Trump appears increasingly reluctant to punish Turkey––at a time that ties between Turkish President Recep Tayyip Erdoğan and western allies are increasingly under strain. Despite Pompeo’s apparent promise to impose sanctions, a senior Trump Administration official told TIME last Friday, “The United States does not preview sanctions decisions.” (Asked by TIME that same day whether Pompeo still believed that the law requires sanctioning Turkey, a State Department official echoed that the United States would not preview decisions in advance.)

The President has also undercut Pompeo by opening up an alternative channel of communication –– directing Sen. Lindsey Graham to work with Pompeo’s Turkish counterpart to resolve the issue.

Pictured here is the first F-35 stealth fighter jet that was destined for Turkey. In July, the U.S. canceled Turkey's order for the advanced jet after it took delivery of an S-400 Russian missile system.
Atilgan Ozdil/Anadolu Agency/Getty Images

Trump “told me to call Turkey,” Graham told Defense One. “I’m in the camp of, if they don’t activate the [Russian] S-400, the sanctions don’t have to be applied,” Graham said, adding that he relayed this by phone to Turkish foreign minister Mevlüt Çavuşoğlu (who, prosecutors alleged, directed a six-figure deal with Mike Flynn’s firm during the 2016 campaign.) But not activating the system may not be a viable option for Turkey, which just purchased the $2.5 billion technology from Russia.

Later that day, Pompeo was asked on Bloomberg TV whether Graham’s position was shared by the Administration. “I’m not going to talk about internal deliberations,” Pompeo replied. “We’re all working, everyone’s working together to do our best…there could be more sanctions to follow, but frankly what we’d really like is for the S-400 not to become operational, that’s our objective.”

(Graham, a former Trump adversary who has over the past three years increasingly morphed into a defender of the President, was also reportedly asked to work on developing a new Iran deal.)

“Everything about the way that this has developed benefits Vladimir Putin, and benefits Russian interests,” Ross Wilson, who served as a U.S. Ambassador to Turkey under President George W. Bush, tells TIME. “And that’s exactly why the Russian authorities struck this deal, as a way to as a way to estrange the United States and Turkey from one another, as a way to loosen Turkey’s ties with the [NATO] alliance, reflecting a strategy that goes all the way back to Soviet times of trying to break up the alliance.”

After Turkey began receiving the S-400 from Russia, the U.S. canceled Turkey’s order of more than 100 Lockheed-manufactured F-35 Lightning II stealth fighter jets. (Key U.S. allies, including the U.K., Israel, Japan and Australia, have also signed on to buy the fighter for their own defense forces.) Pentagon and NATO leaders have long said that Turkey’s use of the S-400 could allow Russia to observe and “attempt to exploit” vulnerabilities in F-35 stealth capabilities, which means that Turkey’s arms deal with Russia also violates NATO’s interoperability policy. Secretary of Defense Mark Esper testified at his confirmation hearing that he told Turkey’s defense minister, “You can either have the S-400 or you can have the F-35. You cannot have both.” When Turkey took delivery of S-400 parts last month, Washington made good on its threat just days later.

But Trump has balked at even having to drop Turkey from the F-35 fighter program, publicly saying that the cancelation “is not a fair situation” –– let alone having to impose further economic sanctions.

Meanwhile, Turkey has taken to arguing that the Countering America’s Adversaries Through Sanctions Act (CAATSA), the U.S. law that mandates sanctions, gives Trump the authority to waive or delay penalties. But to get such an exemption, Trump would need to submit a justification to congressional committees, where he would face bipartisan pushback. If Trump elects to formally waive or delay the sanctions, it could set up a clash with Republican lawmakers that would draw renewed attention to the 2017 veto-proof passage of the law to punish Russia for interfering in U.S. elections –– and the President’s own tepid response to that interference. Such a showdown would also be a test of whether the relatively new law gives Congress the ability to constrain the president on foreign policy, a realm mostly controlled by the executive branch.

Trump has reportedly asked 46 Republican senators for “flexibility” on the sanctions.

There is concern that sanctions on Turkey could paradoxically benefit Russia by widening the growing rift between the U.S. and its increasingly wayward ally. “I think the Administration is absolutely right to try to respond to this in a way that doesn’t unduly harm the alliance,” Wilson, the former ambassador, says. “How it’s going to do that — it’s not very easy to see.”

Asked whether the Trump Administration ultimately intends to impose economic sanctions on Turkey, the senior Administration official told TIME last week that “nothing has changed about our serious concerns over Turkey’s pursuit of the Russian S-400, as evidenced by previous statements from the Administration as well as the President’s comments last week.” (The State Department official also echoed that language, signaling that at least for now, Pompeo’s messaging has shifted to remain in lockstep with Trump.)

Those comments came during a cabinet meeting on July 16, when Trump indicated that he blamed the Obama Administration for not selling Turkey an alternative system — the Raytheon-manufactured Patriot missiles, which would not create the same security risk, and which the Trump Administration offered to sell to Turkey for $3.5 billion. Trump made no promises on sanctions, and summed up the cancelation of the F-35 deal by saying, “Because of the fact he [Erdogan] bought a Russian missile, we’re not allowed to sell him billions of dollars’ worth of aircraft. It’s not a fair situation. Do you have something to add to that, Mike?”

“No, sir,” Pompeo replied. “I think you explained it well.”

“I think so. Good. You said the right thing,” Trump said, to laughter. 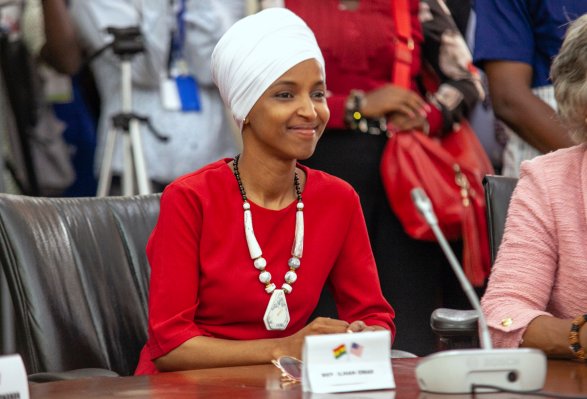 Ilhan Omar Trolls Trump With Pictures From Africa Visit
Next Up: Editor's Pick