While former Special Counsel Robert Mueller has made it clear he does not intend to go beyond what is laid out in his report when he testifies before the House Intelligence Committee on Wednesday afternoon, he indicated one possible exception in May.

The threat to U.S. election security “deserves the attention of every American,” Mueller warned in his rare public remarks on May 29, the closest he got to giving an opinion on the content of his report. He again reiterated those words in front of the House Judiciary Committee on Wednesday morning.

“Over the course of my career, I have seen a number of challenges to our democracy,” Mueller told lawmakers. “The Russian government’s effort to interfere in our election is among the most serious.”

But while his 448-page report painstakingly detailed Russian involvement in 2016 and the vulnerabilities it exposed in the U.S. election system, that is is unlikely to take center stage at his congressional testimony even as U.S. national security officials warn that little is being done to prevent the same thing from happening in 2020. While Democrats on Tuesday used the upcoming hearing to slam Republicans’ unwillingness to advance election security legislation, it remains to be seen how many of them are planning to give up some of their limited time to ask Mueller to go deeper on the issue instead of using it to spotlight President Donald Trump’s actions.

If it was prioritized, Mueller could give significant weight to election security efforts that have floundered in Congress. Several Democrats on the House Intelligence Committee have indicated that they hope he will use the high-profile hearings to talk about these ongoing threats, but demurred when asked whether they themselves would be using some of their valuable time — about five minutes each — to ask those questions. The hearings come as Congress remains deadlocked on legislation to counter the next attack on U.S. election infrastructure, three years after the Russian operation first came to light. Democrats are accusing Senate Majority Leader Mitch McConnell of refusing to allow the Senate to vote on bipartisan election security proposals.

“Tomorrow, we’re going to hear again directly from Bob Mueller about what these attacks on our democracy were and hopefully it will spike people’s interest in making sure that we can reinforce our election security,” Rep. John Sarbanes, a Maryland Democrat, said on Tuesday. “Hopefully it will get Mitch McConnell interested in this fundamental enterprise to make sure that Americans’ democracy is secure and protected.”

This includes the “Securing Americans Federal Elections Act” (SAFE), which would require voting systems to use backup paper ballots in federal elections. It passed the House in June, but has stalled as McConnell has not agreed to schedule a vote. Another bipartisan bill, which proposes a formal information-sharing channel between DHS and other federal agencies and states, is also deadlocked, as is a Democratic proposal to send more than $1 billion to state and local governments to bolster election security, and restrict their spending of federal funds to federally certified “election infrastructure vendors.”

Mueller’s 448-page tome painstakingly laid out the Russian efforts to undermine the U.S. presidential election in a “sweeping and systematic fashion,” and the vast scope of the vulnerabilities it revealed in the system. It describes how Russian intelligence officers hacked into the computer system of the Democratic National Committee, stole top Democrats’ emails and then disseminated them. It traces the Russian social media disinformation campaign meant to damage Hillary Clinton and boost Trump, and details the inner workings of its operation. It also shows how they aimed for the very infrastructure of American elections, successfully hacking U.S. voting software and targeting election technology companies and local officials. According to the report, the FBI believes Russian intelligence gained access to the network “of at least one Florida county government” in 2016. Florida Gov. Ron DeSantis in May confirmed that Russian hackers had breached two county election systems in the state.

The U.S. has taken some measures to safeguard U.S. election infrastructure since the extent of the 2016 interference became clear. The Department of Homeland Security formed the Cybersecurity and Infrastructure Security Agency last year, and has moved to build relationships with state and local officials of the roughly 9,000 local jurisdictions that conduct elections. Ahead of the 2018 midterm elections, it conducted security exercises with several states and encouraged local election officials to flag anything suspicious. Last week, Director of National Intelligence Dan Coats installed an election security “czar” to coordinate those plans.

McConnell has made it clear he considers these efforts sufficient, noting that Congress has allocated $380 million toward election security efforts.

“Thanks to efforts across the federal government, in 2018 we were ready,” he said in a speech on the Senate floor in May in which he declared that Congress had to “move on.”

However, U.S. national security officials have continued to raise concerns as the 2020 election ramps up. In April, FBI director Christopher Wray warned that foreign adversaries would “keep adapting and upping their game” and that the agency is “very much viewing 2018 as just kind of a dress rehearsal for the big show in 2020.”

Meanwhile, Trump has fanned the flames by floating that he might not alert the FBI if foreign governments offered his campaign damaging information against his 2020 rivals in the next election cycle.

“Leader McConnell has not brought a single piece of election legislation to the floor even though the president’s own security team has said that we’re in jeopardy,” Sen. Mark Warner, a Virginia Democrat, said on Tuesday. “At the behest of the White House he has made it his goal to kill any meaningful legislation and any efforts to make sure that our nation is fully protected from another attack on our democracy.” 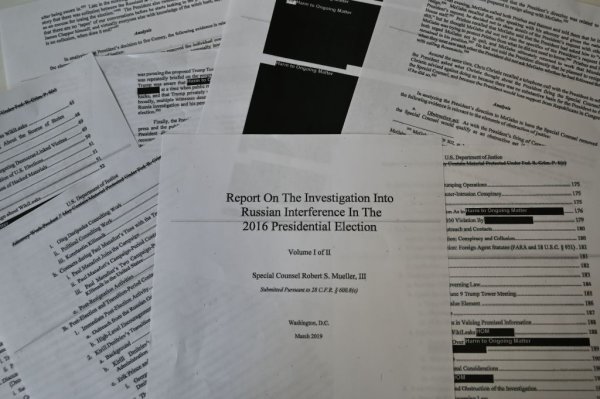 The Stakes for Democrats Couldn’t Be Higher During Mueller’s Testimony. Here's How They're Getting Ready
Next Up: Editor's Pick