Constructing a great romantic comedy is harder than it looks. Without straying much from the formula—first the meet-cute, then many false starts, all culminating in happily ever after—the creators have to provide some element of novelty. Bringing Up Baby had a leopard. Obvious Child had an abortion. And the beloved 1994 rom-com Four Weddings and a Funeral was built around three delightful ingredients: the extreme Britishness of screenwriter Richard Curtis, who would further distinguish himself in the genre with Notting Hill, Bridget Jones’s Diary and more; a charming lead actor in Curtis muse Hugh Grant, making his kooky-dreamboat breakthrough; and a script that avoided everyday life in favor of the events listed in the title.

Sadly, the much-anticipated Hulu adaptation that will debut on July 31 has none of these elements (or their equivalents) to recommend it. Spearheaded by Mindy Kaling and billed, confusingly, as a “limited anthology rom-com series,” this new Four Weddings and a Funeral plays like a remix more than a straightforward remake. Both versions follow a group of friends through that dizzying period of their early 30s when everyone suddenly get hitched. From the original, Kaling and her collaborators (among them Curtis, an executive producer) repurpose bungled best man speeches, secret crushes, rich older men wooing young women, weddings that end abruptly at the altar. They even quote Grant’s floppy bangs in the untamed hair of bookish Duffy (John Reynolds of Search Party and Stranger Things). Grant’s co-star Andie MacDowell appears in a small role.

The object of Duffy’s unspoken affections is Maya, a communications specialist who stayed in the U.S. to work in politics after college while Duffy moved with their friends Ainsley (Mindy Project alum Rebecca Rittenhouse) and Craig (Brandon Mychal Smith) to London. Played by Nathalie Emmanuel, in her first big TV role since her moving performance as Game of Thrones’ tragic Missandei, Maya is a gender-flipped update of Grant’s indecisive bachelor character, and her visit for Ainsley’s wedding throws the expat clique into flux even before she has a heart-to-heart with a cute Brit at Heathrow who turns out to be the groom, Kash (Nikesh Patel). Meanwhile, Ainsley’s haughty English neighbor (Downton Abbey’s Zoe Boyle) is jealous of Maya’s history with her new best friend. And in a fairly gratuitous side plot, Craig has a tumultuous romance going with working-class Londoner Zara (Sophia La Porta)—as in the multinational retail chain.

It’s a pretty standard rom-com setup, and one whose relationship to the show’s namesake isn’t particularly close. But the lack of novelty wouldn’t be a problem if the team behind this reboot had managed to recreate the witty, propulsive feel of the movie. Instead, episodes get bogged down in the friends’ daily lives, providing more mundane backstory than any Four Weddings fan could want. The dialogue is rough; instead of tapping into the literary sensibilities of British comedy, Kaling and co. exploit the London backdrop for broad stereotypes about upper-class and (more egregiously) low-income English people alike. Curtis wrote lines like this: “A toast before we go into battle: True love, in whatever shape or form it may come. May we all in our dotage be proud to say, ‘I was adored once too.’” In their place, we get this: “If somebody matters to you, you show up for them.” Characters have entire conversations in which no one utters a sentence you can imagine coming out of a real human mouth. Clichés—“My whole life I’ve been trying to be something I’m not”—abound.

Though it saddens me to say so, Emmanuel hasn’t yet mastered the rhythms of comedy—or the deployment of an American accent. The writers certainly could have helped her out more than they do, but the few decent jokes they give her (“If you’re away from D.C. for too long, Mike Pence turns your office into a chapel”) fall flat, too. Then again, maybe the directing is to blame: MacDowell’s scenes are overshadowed by what I think is supposed to be a Southern accent. Even naturally funny actors like Smith, who killed as a mischievous rapper in the Tyler, the Creator mold on You’re the Worst, look a bit disengaged.

There are occasional bright spots; a Love Island parody nails the international reality franchise’s brain-dead approach to matchmaking. But a raft of other allusions to cultural touchstones of romance—from A Midsummer Night’s Dream and Jane Austen to Nicholas Sparks and Curtis’ Love Actually—mostly fall flat. I sometimes got the impression that, like The Mindy Project, the show was reaching for a larger statement on rom-com culture, yet both series generally fail to distinguish between the repetition of genre tropes and commentary on same. “I like watching people fall in love onscreen so much that I can suspend my disbelief in the contrived situations that occur only in the heightened world of romantic comedies,” Kaling once wrote. “I have come to enjoy the moment when the male lead, say, slips and falls right on top of the expensive wedding cake.” Maybe viewers who agree will enjoy her Four Weddings. For the rest of us, at least the original is also streaming on Hulu. 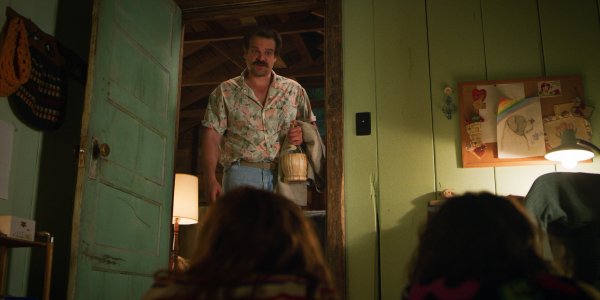 Let's Talk About the Meaning Behind This Heartbreaking Stranger Things Season 3 Reference
Next Up: Editor's Pick