President Trump Continues Attacks on Democratic Congresswomen, Saying They Are Not 'Capable' of Loving the U.S.

President Donald Trump drew fresh criticism on Sunday with an eighth day of attacks on the four progressive Democratic Congresswomen known as “The Squad,” whom he said he didn’t believe were “capable of loving our country” and should apologize for “hateful” comments.

Sunday’s Twitter message came after the president said on July 14 that the women, all minorities, should “go back” to the “corrupt and inept” countries they came from — a message condemned by Democrats and some Republicans as racist and divisive.

Trump is spending the weekend at his golf club in Bedminster, New Jersey. The latest tweet came minutes after a segment on one of the lawmakers, Representative Alexandria Ocasio-Cortez of New York, on Fox News Channel.

Three of the women of the Squad — Ocasio-Cortez, Representative Rashida Tlaib of Michigan, and Representative Ayanna Pressley of Massachusetts — were born in the U.S. Representative Ilhan Omar of Minnesota was born in Somalia and immigrated as a child.

Trump this week briefly attempted to distance himself after people attending his campaign rally in North Carolina started a “send her back” chant in response to his criticism of Omar. Since then, though, he’s reversed that disavowal, saying the people at the rally were “incredible patriots.”

By contrast, Trump called the women of the Squad, all first-term lawmakers, “weak & insecure people” who are “destroying the Democrat Party.”

Senator Cory Booker of New Jersey, a 2020 Democratic presidential candidate, said Sunday that Trump is “worst than a racist” and compared the president to George Wallace, a former governor of Alabama known as an opponent of the civil rights movement.

“He’s actually using racist tropes and language for political gain, to use this as a weapon to divide our nation against itself,” Booker said on CNN’s “State of the Union. “This is somebody who is very similar to George Wallace, to racists who use the exact same language.”

White House adviser Stephen Miller, who has drafted some of the president’s most hawkish immigration policies, defended Trump on “Fox News Sunday.”

Miller said there was a difference between Ocasio-Cortez’s use of the word “garbage” to illustrate the need for more ambitious policy initiatives, policies, and Trump’s use of the term in a 2014 tweet, when he said of former President Barack Obama, “Everything he touches turns to garbage!”

Senator Ron Johnson, a Wisconsin Republican, said on CNN that he’d like to see “everybody tone down their rhetoric.” Asked about Trump’s latest tweet, Johnson said “that’s his opinion and I don’t agree with it.” 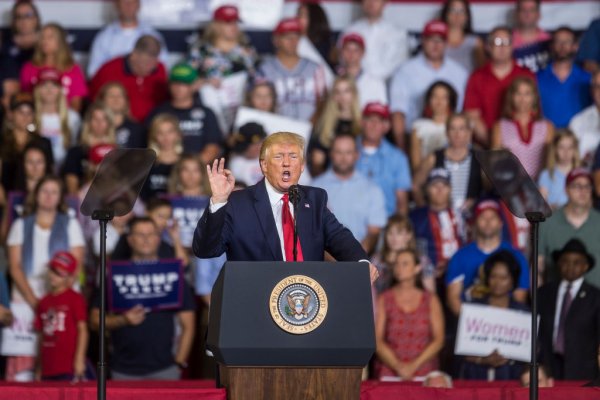 After President Trump's Racist Tweets, People Have Been Searching for the Definition of 'Racism'
Next Up: Editor's Pick