7 Insane Scenes That Wound Up Getting Cut From Avengers: Endgame

During a Friday panel at San Diego Comic-Con, Avengers: Infinity War and Avengers: Endgame writers Stephen McFeely and Christopher Markus offered fans an inside look at what it was like to piece together the two incredibly complicated films.

Not only were the writers dealing with dozens of heroes and villains, but for the second movie, they had to sort out a complex time-travel plot. The writers even shared the storyboard they used to track where all the Infinity Stones were located at different times in the movies and the time-travel plot.

It’s said that there are no bad ideas in brainstorming, but some of McFeely and Markus’ stranger plot points would have radically changed Endgame — and perhaps even disturbed the audience. In one pitch to Marvel, they suggested that Thanos could enter the climactic fight with the Avengers carrying the decapitated head of one of their team members. Yuck.

Here are all the strange, extraneous and bizarre ideas that were cut from the latest Avengers scripts, according to the film’s writers.

Thanos goes on a psychedelic tour with Doctor Strange

Markus and McFeely almost borrowed a scene from Doctor Strange. In that movie, the Ancient One (Tilda Swinton) pushed Stephen Strange (Benedict Cumberbatch) through the Mindscape, and Strange finds himself falling through an array of colors. One of the scenes that was cut from Infinity War involved Strange sending Thanos (Josh Brolin) on a similar LSD trip-esque experience, but with hefty psychological consequences.

During the trip, Thanos would appear before the Living Tribunal, a cosmic panel which judges whether the various realities of the Marvel universes are sustainable. The tribunal would find him guilty of old crimes. But the writers said the diversion took the punch out of the climactic fight, so the scene was cut.

Originally, Smart Hulk — the melding of the Hulk and Bruce Banner (Mark Ruffalo) into one large but smart being — was supposed to appear in Infinity War, before Endgame. In the original script, Bruce and Hulk achieve a union while wearing the Hulkbuster armor and fighting Thanos’ henchman, Obsidian. But the triumph felt strange in the larger landscape of a battle that the Avengers ultimately lose.

Rocket and Jane have a chat

Natalie Portman returned to the Marvel movies for the briefest of cameos as Thor’s former love interest, Jane Foster. A scene was cut in which Rocket (Bradley Cooper) tries to explain to Jane why he has traveled back in time and needs the Reality Stone. But the scene was cut for time.

This is a truly messed up twist: The original plan for the final battle between Thanos and the Avengers in 2023 was for Thanos to enter the fight carrying the head of the decapitated Captain America (Chris Evans) to psych him out.

Remember, the Thanos who fights the Avengers in the climax hails from the year 2014 (and the original Guardians of the Galaxy film). So he would have visited earth in 2014, decapitated that version of Captain America, traveled forward in time to 2023 and shown the 2023 Captain America the 2014 version’s head. (Time travel in Endgame is rather complicated, but because new actions create parallel universes, killing someone in the past does not kill their future self.)

This idea proved too gruesome and was quickly cut from the script.

Originally, after the snap, all the Avengers were supposed to return to the Avengers compound before the fight with Thanos. Crucially, Iron Man (Robert Downey Jr.) is greeted by Spider-Man (Tom Holland). Then they all go to get pizza together. But the writers decided it would make more sense for all of the dusted characters to reappear in the exact place where they vanished. Thus, they decided to bring back the missing heroes in the midst of the battle with Thanos.

The writers tested many different versions of a dying speech for Tony. But it was Robert Downey Jr.’s idea to not speak during the scene lest it take the weight away from his heroic “I am Iron Man” moment.

Though the scene was never written, the writers did think about the fact that Captain America returning all the Infinity Stones to their original locations at the end of Endgame meant that he would have to confront his nemesis from Captain America: The First Avenger, Red Skull. They considered a scene between the two characters in space, but decided to cut it. 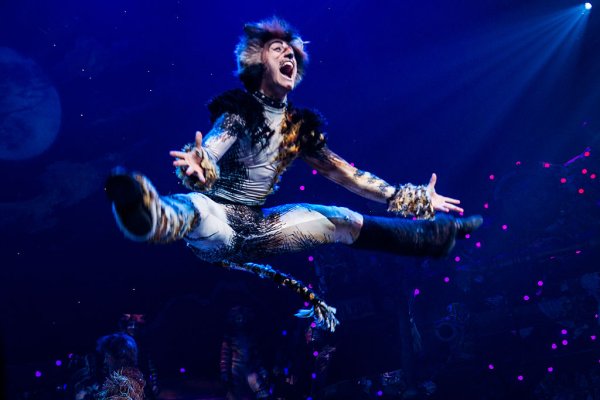 Here's What to Know About the 'Cats' Musical and New Movie
Next Up: Editor's Pick