Republicans Condemn 'Send Her Back' Chants at Trump's Rally. But They're Still Defending President Trump

After the crowd at President Donald Trump’s rally chanted “send her back” in reference to a foreign-born Congresswoman, Republicans on Capitol Hill largely condemned the rhetoric. But they also defended the President himself, saying Trump, who only days earlier had tweeted similar sentiments, was not at fault.

Speaking at a rally in North Carolina Wednesday evening, Trump criticized Minnesota Congresswoman Ilhan Omar for previous comments she made about Israel that he characterized as anti-Semitic. As the crowd began chanting “send her back,” the President stood silent on the podium. Just days earlier, he shared similar thoughts on Twitter, telling Omar and three of her colleagues who were all born in the United States to “go back” to their countries of origin.

Wednesday’s rally chants were immediately rebuked by both sides of the aisle, albeit more strongly by Democrats. Although Republicans had largely remained silent after the President’s racist tweets, some now immediately jumped into the fray to denounce the crowd at the rally. “I deeply disagree with the extreme left & have been disgusted by their tone. I woke up today equally disgusted – chants like “send her back” are ugly, wrong, & would send chills down the spines of our Founding Fathers,” Illinois Rep. Adam Kinziger wrote on Twitter. “This ugliness must end, or we risk our great union.”

When questioned about the rally Thursday morning at a breakfast, Rep. Tom Emmer, who chairs the National Republican Congressional Committee and also represents Minnesota, said that he hadn’t watched, but that “there is no place” for such rhetoric.

As Thursday progressed, more Republicans in Congress claimed the rhetoric didn’t belong in America. By the afternoon, even the President himself was disavowing the chants. “I was not happy with it — I disagree with it,” he said Thursday, claiming that he tried to stop it even though video from the rally shows otherwise.

But when it came to the President himself, Republicans continued to claim a dividing line. Trump, said Emmer, “doesn’t have a racist bone in his body.”

When reporters compared Trump’s silence to the actions of the late Sen. John McCain, who as a Presidential candidate in 2008 rebuked an audience member for falsely categorizing his-then opponent Barack Obama as an “Arab,” South Carolina Sen. Lindsey Graham, who was a close friend of McCain’s, leapt to Trump’s defense. “I don’t remember John McCain having to go through this crap every day, all the time,” he told reporters.

Other Republicans denied that the chants bore any causal relationship to Trump’s Twitter feed. “If you’ve been at any rally, you know the President doesn’t control the chants that happened,” North Carolina Rep. Mark Meadows told reporters.

But former Arizona Sen. Jeff Flake, who frequently criticized the President during his tenure on Capitol Hill, disagreed. “These chants echo the President’s own words. He can’t avoid responsibility for the actions of the crowd,” , wrote in an email to TIME. “Republicans can’t be expected to respond to every offensive tweet by the President. But there are times when the President goes so far over the line that Republicans need to speak out and condemn. Otherwise it normalizes behavior that should not be normalized.” 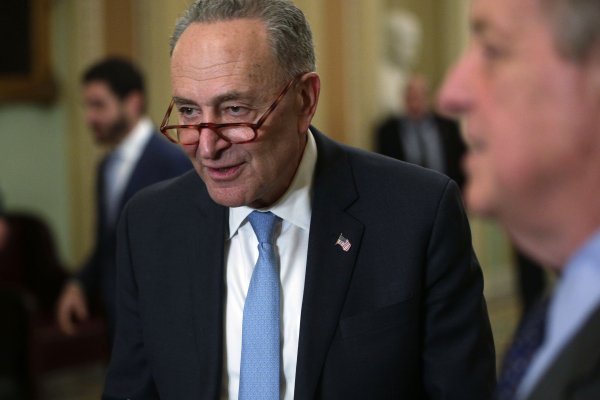 Chuck Schumer Asks FBI to Look Into FaceApp
Next Up: Editor's Pick