The Peak of the Delta Aquarid Meteor Shower Is Coming. Here's How to Watch It

July has already been full of space-related celebrations and history, but there’s one more big event in store: the Delta Aquarid meteor shower will peak at the end of July, and NASA meteor expert Dr. Bill Cooke has some advice for all the stargazers out there: “bring bug spray and get comfy.”

The Delta Aquarid meteor shower technically lasts over a month, but the show will be most visible between July 29 and July 31. Even so, you’ve got to be patient. As Cooke explains, the Delta Aquarid isn’t one of the brightest showers, so it can sometimes be hard to see the meteors.

But this year, we’ll have a waning new moon right around the time the Delta Aquarid is supposed to peak, resulting in nice, dark skies that are perfect for stargazing. This is your chance to take that much needed break from Netflix and Twitter, and enjoy a good old fashioned summer night.

Here’s everything you should know about the Delta Aquarid meteor shower.

What is the Delta Aquarid meteor shower?

The Delta Aquarid meteor shower is an astronomical event whose radiant — the place where meteors appear to originate — lies in the constellation Aquarius. It occurs every year between mid-July and late August; this year, it falls between July 12 and Aug. 23. It was first noted in 1870 by a British astronomer named G. L. Tupman.

During the shower, about 25 meteors flash across the sky every hour at peak time in the Southern Hemisphere. But in the Northern Hemisphere, there will be fewer visible; likely about 10-15 per hour, Cooke says. The Delta Aquarid meteors travel around 25 miles per second, or about 90,000 miles per hour.

The origin of the Delta Aquarid meteor shower remains unknown. However, experts suspect that it’s caused by the comet 96P/Maccholz, which orbits the sun roughly every five years.

When can I see the Delta Aquarid meteor shower?

From July 12 to Aug. 23, you should be able to see at least one or two meteors on a good night, with the peak falling on July 30. But anytime between July 29 through July 31 will also be a good time to watch. We’ll have a new moon on Aug. 1, meaning there will be nice, dark skies under which to observe.

Cooke says that the prime time to watch the Delta Aquarid meteor shower is during the pre-dawn hour. “This is not something you go out after dinner and look to see,” he says. You should plan on being out there for at least a couple of hours, he says, to give your eyes time to adjust and to increase your odds of seeing a meteor.

Check the weather forecast before heading out, too — nothing ruins a night of stargazing as quickly as cloudy skies.

When meteors pass close to earth, they leave behind trails of dust and other particles. Those particles are often caught in earth’s gravity and fall towards the surface, burning up as they descend. When you see a meteor, or a “shooting star,” streak across the sky, you’re seeing one of those particles burn up in the atmosphere. Meteors that reach the surface without burning up completely are known as meteorites.

Some meteors leave behind more or larger debris than others, sometimes resulting in more visible or longer-lasting meteor showers. The brightness of a meteor depends on its size and speed as it falls — if the particles are both fast and large, you’ll likely see a much brighter result down on earth.

Whatever is producing the Delta Aquarid shower, says Cooke, is a “very prolific dust producer.” However, the particles are smaller than many other recurring meteor showers, resulting in less grandiose displays.

It’s always best to try to get away from areas with a lot of light pollution when trying to view a meteor shower, like cities and suburbs. Your best bet is to get out to a place that has relatively little extra light interfering with the night sky. You can use websites like Dark Site Finder to find places with minimal light pollution near you.

Cooke also recommends lying on your back and staring straight up, rather than focusing on any one particular part of the sky. “Treat it like a late-night picnic,” Cooke says. He recommends getting comfortable and letting your eyes adjust to the darkness for at least 30 to 45 minutes. That means no cell phones or flashlights — or, if you need a flashlight, use one with a red color setting, which doesn’t disrupt our night vision.

“A lot of people are disappointed when meteor shower-observing because they simply poke their head out and expect to see the sky filled with [meteors], and that just doesn’t happen,” says Cooke. Instead, you should plan on staying out and staring at the stars for at least a few hours. Cooke calls it “an occasion,” so why not make it one? Grab a couple friends and bring a blanket, sleeping bag, or yoga mat out to an area away from light and human activity. Just remember it can get pretty cold at night, even in the summertime, so equip yourself appropriately.

When is the next big meteor shower?

After the Delta Aquarid, the next big meteor shower peak will be the Perseids, which stargazers consider one of the best meteor showers of the year. That’s Cooke’s second favorite meteor shower after the Geminids, which he says can sometimes have meteors that produce a green color. The Perseids will take place from July 14 to Aug. 24, peaking between August 12 and August 13. But this year, a full moon could ruin the show, Space.com reports. 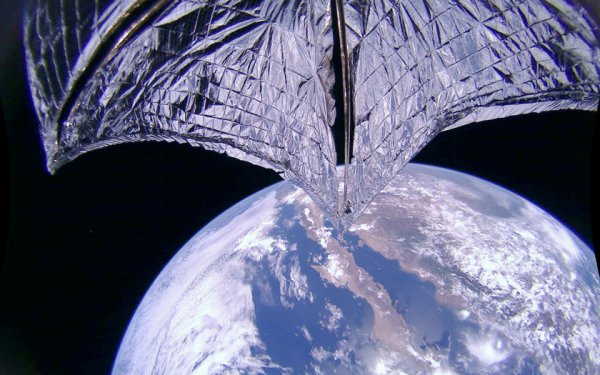 Lightsail 2's Successful Deployment Makes it the First Steerable Spacecraft Powered by the Sun
Next Up: Editor's Pick