After President Trump's Racist Tweets, People Have Been Searching for the Definition of 'Racism'

As backlash and debate over a series of racist tweets posted by President Donald Trump continues, Merriam-Webster dictionary announced a big uptick in Americans searching for the definition of “racism.”

Among Merriam-Webster’s definitions for “racism” are: “a belief that race is the primary determinant of human traits and capacities and that racial differences produce an inherent superiority of a particular race,” “a political or social system founded on racism” and “racial prejudice and discrimination.”

The post came days after Trump apparently told four Democratic Congresswomen of color—Alexandria Ocasio-Cortez, Ilhan Omar, Ayanna Pressley and Rashida Tlaib—to “go back and help fix the totally broken and crime infested places from which they came.” All four women are U.S. citizens and all but Omar, who was born in Somalia, were born in the United States.

Democrats quickly declared the tweets racist and voted to condemn them, but the President pushed back on that accusation. On Monday, he declared that the tweets were “NOT Racist,” and that he doesn’t “have a Racist bone in my body!”

The President’s comments, as well as hesitance by many Republican lawmakers and Trump supporters to call the tweets racist, sparked debate about the word’s actual definition—a debate that, apparently, drove many people to look it up for themselves, along with words like “fascism,” “xenophobia” and “bigot.”

“Socialism” has also come up in the controversy, with Trump repeatedly calling the lawmakers socialist. 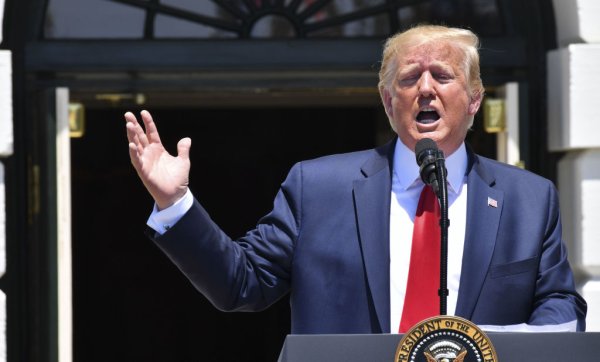 President Trump Doubled Down on 'Why Don't They Go Back' Remarks: Read the Transcript
Next Up: Editor's Pick