The U.S. 'Shot Itself in the Foot' by Pulling Out of the Nuclear Deal, Iranian Foreign Minister Says

The U.S. “shot itself in the foot” by pulling out of the nuclear accord with Iran, Foreign Minister Javad Zarif said, offering a grim outlook for the chance of opening talks with President Donald Trump.

Zarif, in an interview Wednesday with Bloomberg Television, also accused European countries that are part of the agreement of failing to carry out their own commitments under the 2015 deal and after the U.S. withdrawal. He said promises to allow Iran to sell oil and repatriate money have failed to materialize.

Addressing U.S. allegations that Iran has never given up its goal of building nuclear weapons, Zarif said Iran has the technical ability to pursue them “very rapidly” but “we’re not going to” because Supreme Leader Ayatollah Ali Khamenei made a “religious commitment” that they are forbidden, Zarif said in the interview with Bloomberg Editor in Chief John Micklethwait.

“If we wanted to build nuclear weapons, we could have built it a long time ago,” said Zarif, who was in New York to address a United Nations meeting.

Nevertheless, Zarif signaled that Iran will continue to pursue what he called the Islamic Republic’s rights under the accord to respond to the U.S. withdrawal and failed European efforts to deliver promised benefits to the Iranian economy.

Tensions have soared in the Persian Gulf region since the Trump administration stopped issuing sanctions waivers for buyers of Iranian oil and reimposed crippling economic measures against Tehran. In response, Iran has started gradually breaching parts of the nuclear accord, confirming in July that it had surpassed agreed caps on its stockpiles of enriched uranium and exceeded the allowable level of enrichment.

“Yeah, we will continue with the steps, and these steps are legal, in line with the agreement,” Zarif said, when asked about the likelihood of continuing uranium enrichment.

The threat of conflict appeared to climb even higher following a spate of attacks on ships in the Persian Gulf region in May and June, the downing of an American drone last month and the recent British seizure of a tanker carrying Iranian crude, which U.K. officials said was violating sanctions by heading toward Syria. Last month Trump said he called off retaliatory strikes on Iran over the drone, which U.S. officials claim was over international waters and Iran says was over their territory.

Zarif, who has been Iran’s foreign minister since 2013, was the lead negotiator in the multi-party nuclear accord reached in 2015 during the Obama administration that Trump has repeatedly called the “worst deal ever.”

Pressed on how to engage with the U.S. in a way that eases tensions, Zarif suggested that the burden falls on Trump. He also expressed skepticism of renegotiating the accord, known as the Joint Comprehensive Plan of Action, to include talks on Iran’s missile program.

Secretary of State Michael Pompeo says the U.S. “maximum pressure” campaign is working and that the Trump administration is open to talks with Tehran without preconditions. But Pompeo has also laid out a series of 12 conditions for the easing of American sanctions. Iran wants sanctions eased before any talks.

Addressing U.S. accusations that Tehran fuels instability across the Mideast, Zarif said the primary culprits for regional turmoil are its rivals Saudi Arabia and the U.A.E., who buy billions of dollars in weapons from the U.S. Dismissing an issue U.S. officials have cited in recent days, Zarif said that under no circumstances could Iran give up its missiles given the arms buildup by its enemies in the region.

Pressed on whether there’s a diplomatic solution to U.S.-Iran tensions, Zarif suggested that President Hassan Rouhani’s government is drawing lessons from Trump’s threats against Mexico over trade and immigration, and that it was clear to Tehran that Washington would keep asking for more even if the two parties were to eventually strike a new deal.

“After renegotiating NAFTA he raised a new demand and he tried to push Mexicans into giving in a bit more,” Zarif said. “So he always believes, it seems, that ‘What’s mine is mine and what’s yours is negotiable.”’

Zarif rejected the idea that Iran is waiting for next year’s U.S. election to put a Democratic president in office who might be open to reentering the nuclear deal.

“No country in their right mind would make their foreign policy based on results they don’t have any control over,” he said. He went on to give Trump a “better than 50% chance” of winning reelection. 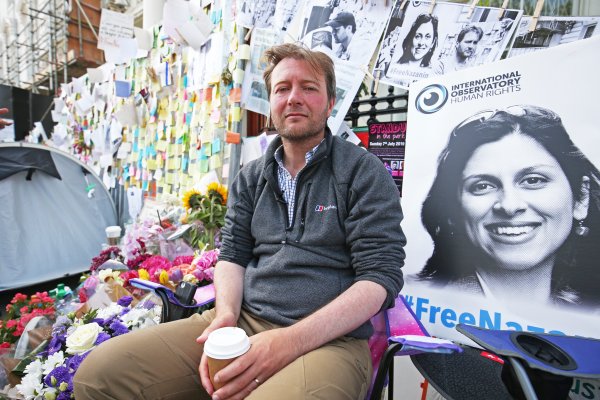 British Woman Imprisoned in Iran Moved to Psychiatric Ward
Next Up: Editor's Pick