Medical staff dressed in protective gear before entering an isolation area at an Ebola treatment centre in Goma, DRC
Sally Hayden—SOPAImages/LightRocket via Getty Images
Ideas
By Gayle E. Smith
Gayle E. Smith is former administrator of USAID and president and CEO of The ONE Campaign.

Imagine a firefighter battling a blaze while the sprinkler system emits gasoline. This is the current state of the Ebola outbreak in the Democratic Republic of Congo (DRC).

So far, over 1,600 people have died from the virus and thousands more have been infected. While this outbreak is not yet at the scale of the last Ebola crisis that claimed more than 11,000 lives, it has the potential to be even deadlier.

With each passing day, the virus keeps spreading. This week, the first case of Ebola was discovered in Goma, a transportation hub on the border of Rwanda. In order to keep pace with the virus, the United States and the international community must start treating this outbreak like the crisis it is.

In 2014, I sat on the National Security Council and helped lead the United States’ Ebola response. At the time, I thought the Ebola outbreak was the most terrifying public health emergency that I would ever witness in my lifetime. It turns out that I was wrong.

The challenges of this outbreak are unprecedented: poor infrastructure, distrust in health workers and lack of access to basic medical care. A big enough barrier on their own, together they make containing this outbreak in the DRC harder and more complex than the last outbreak in Liberia, Sierra Leone, and Guinea.

This instability did not come about overnight. The DRC is rich in resources but has been historically plagued by poor governance and violent conflict. For decades, DRC has failed to make adequate investments in basic healthcare and health infrastructure, the first line of defense against disease outbreaks like Ebola. In 2016, the total annual government spending on health care in DRC was just $3 per person.

Years of interethnic violence has created an atmosphere in the DRC where mistrust of authority is rife. In a recent survey, 25 percent of Congolese respondents said that Ebola wasn’t even real. This lack of trust, along with the ongoing turbulence, has led to attacks against health care workers and clinics which has endangered the entire emergency response.

Make no mistake: Nothing about beating Ebola, or any global health epidemic for that matter, is easy. That’s why the current U.S. administration and the international community would be wise to learn from the mistakes and successes of the last outbreak.

My biggest regret from the last Ebola response is that the world didn’t scale up earlier and faster. The 2014 crisis was unlike anything we had seen before and it exposed how ill-prepared America and the world were to respond to infectious disease threats.

But when America did lead, the rest of the world followed. The United States rallied technical experts and leaders from governments all over the world to launch a coordinated response to the Ebola crisis in Western Africa. Together, we leveraged American investments to yield new commitments from others and reminded the world that when there’s a moral imperative to act on global health, we will.

Now, this White House needs to decide whether it’s ready to answer that same call and lead. The World Health Organization (WHO) has only received half of the requested funds that are needed to fight the outbreak. While the United States certainly cannot solve this problem alone, we must rally the international community to fight this disease that knows no borders.

We also need to get out of our own way. The United States has sent Centers for Disease Control personnel and USAID Disaster Assistance Response Teams—some of the most talented and courageous professionals on the planet—to DRC, but for security reasons, our government has kept them away from the areas hardest-hit by the virus. It’s risky of course, but our best resources need to be on the front line, not the sideline.

As someone who has helped fight this ugly disease before, my experience compels me to speak out to Republicans, Democrats and anyone who is in a position of influence about the steps we can take to help control this outbreak. Right now, we’re watching a crisis turn into a catastrophe. We have the tools to defeat Ebola. What we’re missing is the political will. The time to start caring about Ebola isn’t when it reaches the shores of the United States or Europe, it’s now.

If we allow this inferno to engulf more communities and spread to more countries, we will not have Africa, the World Health Organization, or others to scapegoat. All we will need to assign blame is a mirror. 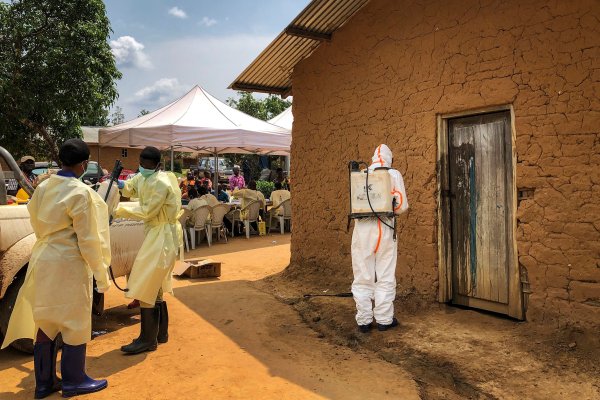 How Misinformation Is Making It Almost Impossible to Contain the Ebola Outbreak in DRC
Next Up: Editor's Pick