See the Past, Present and Future of American Spaceflight in 4 Minutes

50 years ago, humankind took its first steps on an otherworldly body. That mission to the Moon, Apollo 11, opened the door to the decades of space exploration that followed. While it has been difficult in recent years to muster the political or financial support for space travel, we are on the cusp of a new era of American spaceflight that stands to extend our reach back into the cosmic deep.

Apollo 11 — and the three astronauts aboard — may have made the most momentous of space history, but it would not have been possible were it not for the missions — and the sacrifices — that came before. NASA’s Mercury and Gemini programs proved that American hardware and astronauts could circle the earth and come back safely. Neither program went flawlessly, but the problems discovered along the way — and the solutions devised to fix them — helped to make each mission safer than the last.

All the same, the Apollo program — the missions meant to bring astronauts to the Moon — began in disaster. On January 27, 1967, a damaged wire sparked a fire during a test, killing all three Apollo 1 crew members aboard their spacecraft while still on the launch pad. Astronauts wouldn’t fly on an Apollo mission for nearly two more years, when Apollo 7 launched in October of 1968. Apollos 8, 9 and 10 would soon follow, all of which involved testing equipment in preparation for the moon landing to come. That moment finally occurred on July 20, 1969, when the “Eagle” lander touched down on the lunar surface, and Neil Armstrong radioed home some of the most famous words of the 20th century.

Six more Apollo lunar missions followed, including the nearly catastrophic Apollo 13. But the moon landing was seen by many as the end of the great American-Soviet “space race,” and NASA’s ambitions soon turned less grandiose, but no less important.

In the early 1980s, the space agency began flying a true workhorse: the Space Shuttle, officially known as the “Space Transportation System.” The shuttle had a massive cargo bay, was reusable, and launched vertically with the help of two solid rocket boosters, but landed on a runway like a commercial jet — except with no possibility of a go-around.

The Space Shuttle flew its last mission in July of 2011. The United States has since been reliant on the Russian Soyuz spacecraft to get astronauts off the planet — an increasingly uncomfortable state of affairs, given strains in American-Russian relations.

But the nearly decade-long drought of crewed American spaceflight aboard American-built hardware is coming to an end. For several years, NASA has been partnering with private companies to build the next era of American spacecraft. Several such companies, including SpaceX, Boeing, Lockheed Martin and others, are closer than ever to carrying humans aboard their vehicles, vehicles with names like the Dragon and the Starliner. NASA, too, has new hardware that’s poised to fly. The Space Launch System, or SLS for short, is a massive rocket meant to carry astronauts beyond Earth orbit, aboard the agency’s new Orion spacecraft.

While many of these vehicles have been subject to delays, political disputes and other challenges, this is still the most exciting and optimistic time for American ambitions in outer space in decades.

Write to Jeffrey Kluger at jeffrey.kluger@time.com and Brian Braganza at brian.braganza@time.com. 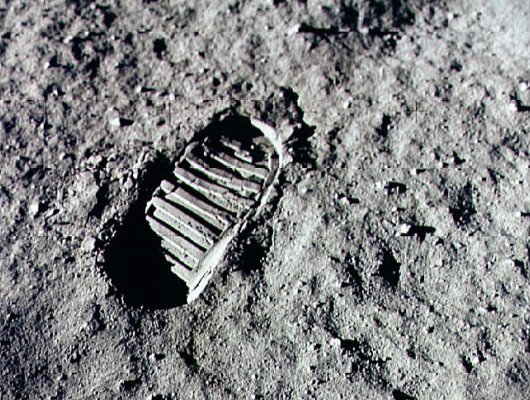 Lots of People Have Theories About Neil Armstrong's 'One Small Step for Man' Quote. Here's What We Really Know
Next Up: Editor's Pick