The Woman Who Discovered the Cause of Global Warming Was Long Overlooked. Her Story Is a Reminder to Champion All Women Leading on Climate

A woman shouts slogans while marching through the city centre during a demonstration by hundreds of school children calling for action on climate change in South Africa, on June 14, 2019, in Cape Town, as part of the international "Extinction Rebellion" (XR) environmental protests.
Rodger Bosch—AFP/Getty Images
Ideas
By Katharine Wilkinson
Dr. Katharine Wilkinson is an author, teacher, co-founder of The All We Can Save Project, and co-host of the podcast A Matter of Degrees. Her books on climate include All We Can Save, The Drawdown Review, Drawdown, and Between God & Green.

Eunice Newton Foote rarely gets the credit she’s due. The American scientist, who was born exactly 200 years ago on Wednesday, was the first woman in climate science. It was back in 1856 that Foote theorized that changes in carbon dioxide in the atmosphere could affect the Earth’s temperature. She broke scientific ground that remains more relevant than ever in 2019, but history overlooked her until just a few years ago.

Foote arrived at her breakthrough idea through experimentation. With an air pump, two glass cylinders, and four thermometers, she tested the impact of “carbonic acid gas” (the term for carbon dioxide in her day) against “common air.” When placed in the sun, she found that the cylinder with carbon dioxide trapped more heat and stayed hot longer.

From a simple experiment, she drew a profound conclusion: “An atmosphere of that gas would give to our earth a high temperature; and if as some suppose, at one period of its history the air had mixed with it a larger proportion than at present, an increased temperature…must have necessarily resulted.” In other words, she connected the dots between carbon dioxide and global warming.

Foote’s paper, “Circumstances Affecting the Heat of Sun’s Rays,” was presented in August 1856 at a meeting of the American Association for the Advancement of Science and then published. (For unknown reasons, likely rules or social norms, it was read by a man from The Smithsonian, rather than Foote herself.) That was three years before Irish physicist John Tyndall published his own, more detailed work on heat-trapping gases — work typically credited as the foundation of climate science.

Did Tyndall know about Foote’s paper? It’s unclear — though he did have a paper on color blindness in the same 1856 journal as hers. In any case, I have to wonder if Eunice Newton Foote ever found herself remarking, as so many women have: “I literally just said that, dude.”

I also find myself wondering: What might Foote have achieved if she had Tyndall’s access to training and resources? We can only imagine. Perhaps we can understand, if not abide, that Foote was hobbled by the conventions and limitations of her day. Perhaps we can also amend that loss by supporting women in climate today.

Look around the world, and you will see women and girls making enormous contributions in this space. Conducting research and advancing climate science, to be sure, but also cultivating solutions, creating campaign strategy, curating art exhibits, crafting policy, composing literary work, charging forth in collective action, and more. Look around, and you will see truly catalytic leadership grounded in courage, creativity, compassion, and collaboration.

As someone who has worked in climate for two decades, it’s easy for despair to creep in. This groundswell of leadership gives me courage. To my mind, this is where possibility lives — possibility that we can turn away from the brink and move towards a life-giving future for all. Yet, girls and women leading on climate receive insufficient backing and, even now, too little credit. That’s especially true for women of the Global South, rural women, and women of color. Worse than unfair, it’s ineffective for creating change. In the face of the climate crisis, we need every person possible on the task of transforming society.

I’m not alone in this belief. Today, a group of women from around the world has released the following declaration:

The climate movement cannot succeed without an urgent upsurge in women’s leadership across the Global South and the Global North. Women and girls are already boldly leading on climate justice, addressing the climate crisis in ways that heal, rather than deepen, systemic injustices. Yet, these voices are often under-represented and efforts inadequately supported.

Now is the moment to recognize the wisdom and leadership of women and girls. Now is the moment to grow in number and build power. We invite all of our sisters to rise and to lead on climate justice, and for those with relative power and privilege to make space for and support others. To change everything, we need everyone.

Signatories to the declaration include Mary Robinson, first female president of Ireland, Musimbi Kanyoro, president and CEO of Global Fund for Women, and Alaa Murabit, medical doctor and one of 17 Global Sustainable Development Goal Advocates appointed by the UN Secretary General.

One of the key actions signatories pledged is “to unify women’s efforts to create equity in health, education, economy, politics, peace and security, and beyond with the climate justice movement.”It shows a marked shift towards recognizing that human rights and climate are inseparable.

Eunice Newton Foote, if alive today, might be very pleased to find that connection drawn. After all, she wasn’t only a scientist. She was involved in the early movement for women’s rights, too. Her name appears on the list of signatories to the 1848 Seneca Falls Declaration — a manifesto created during the first women’s rights convention in the United States — right below Elizabeth Cady Stanton, of suffragette fame. Foote’s husband, Elisha, and Frederick Douglass also signed on, under “gentlemen.” (Of note: John Tyndall opposed women’s suffrage.)

Some 163 years after Foote’s experiment, conditions for women in climate have certainly improved. For one thing, it’s far less lonely than before. But if we want that “urgent upsurge”, it will take commitment, dollars, and platforms. It will demand giving credit where it’s due and continuing to improve inclusion.

Now is the time to champion women and girls who lead on climate. And to honor those who came before, whose insight and ability ought not to have been ignored. Cheers to you, Eunice. 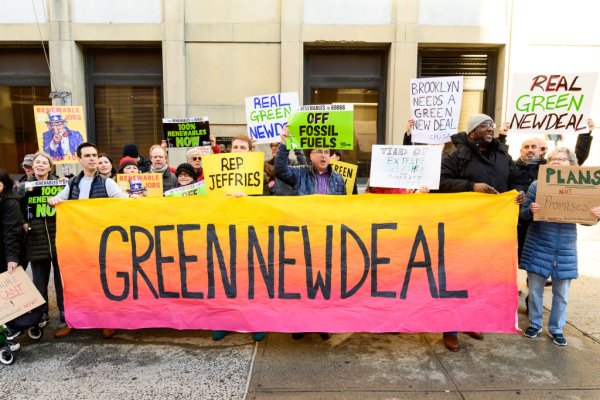 Green New Deal Supporters Back Carbon Taxes Too
Next Up: Editor's Pick