Prime Day, Amazon’s made-up summer shopping extravaganza, is back again, and this year, it’s going into overtime. Prime Day is now a 48-hour event, giving you two days to get your hands on some discounted goods.

Amazon’s self-made holiday originally began as a celebration of its 20 year anniversary, and has grown into a true shopping spectacle, comparable to Black Friday. Prices are being slashed on lots of tech, including popular consumer electronics, games, smart home gear, and other gadgets you didn’t think you needed until now. This year, Prime Day starts on July 15 at 12 a.m. PT and ends at 11:59 p.m. PT on July 16. If you’re already in possession of an Echo device, on July 13 you can ask, “Alexa, what are my deals?” and get access to select discounts early.

Here are some of the best Amazon Prime Day tech deals we’ve found so far:

If you want to go Google instead, you can save $260 on any Google Pixel 3 or 3XL configuration, a great deal on a smartphone with a quality camera. You can also get a Pixel 3a XL for $479, along with a $100 Amazon gift card.

As for Amazon’s Kindle e-reader, you can save a few bucks on those and get started reading some of the most popular titles without spending a penny more. During Prime Day, buying any Kindle will net you a $5 e-book credit, as well as three free months of Kindle Unlimited, Amazon’s Netflix-for-books service available on its Kindle devices. Amazon’s cheapest Kindle will run you $59.99 on Prime Day, saving you $30 in the process. Want a quality e-reader that can survive being used in the tub? Amazon’s high-end Kindle Oasis, with its water resistance and backlit screen that adjusts based on your surroundings, will cost you $174.99. That’s an $80 savings, perfect for buying some extra books.

Apple’s latest 128GB Wi-Fi iPad, normally $429, is now $299, saving you a hefty $130. Since Apple’s latest iPad supports its first-generation Apple Pencil, normally $99, you can also take advantage of your newfound savings and add one to your cart for $94.88.

While you’re getting that 4K TV, might as well snag a game console that can handle all those pixels. If you’re a Sony fan, snag a PlayStation 4 Pro for $349. Since you’ll need some games to go along with it, you’ll be happy to know a wide selection of PS4 games like Kingdom Hearts 3 and Sekiro: Shadows Die Twice are discounted by as much as 68%. You can also find various discounts on accessories like controllers, headsets, stands, and storage for all your digital titles.

4K viewers can also save $25 and snag the Fire TV Stick 4K with Alexa Voice Remote for $24.99. If you’re looking for a streaming device that’s a bit more capable, or one that’ll help solve your smart home issues, check out the Fire TV Cube at $69.99, which doubles as an Echo device and costs $50 less than it would any other day.

You can also use this opportunity to secure the homestead with Amazon’s line of home security gadgets, each one giving you at minimum a double-digit discount. Need a home security starter kit? The Ring Alarm 14-Piece Kit is $199 on Prime Day, $130 off its listed price.

For cord-cutters and show streamers, you can get your hands on some discounted Fire TV gear for your TV, 4K or otherwise on Prime Day. Watching on a 1080p screen? You can save $25 and get a Fire TV Stick with Alexa Voice Remote for $14.99.

Snagging a mesh network on Prime Day is a great idea to improve your home’s wireless network, and the Eero WiFi system is one of the best around. You can save up to $200 on Eero WiFi system bundles, or save $100 and snag a single Eero Router for $99 to add one more to your existing network.

For people looking for a capable wearable, why not save a few bucks on an Apple Watch? You can get a 44mm Apple Watch Series 4 for $354, saving $75 in the process. Looking at the older Series 3 version? You can get a GPS + LTE model for $299, perfect for the person who would rather leave their phone where it’s at while you stay in touch with everyone from your wrist.

Need a classy wearable, one that won’t scream nerd? Withings, maker of wearables and other health-based tech, is offering discounts of as much as 30% on its products. Its Withings Steel HR Sport, which doubles at a sleep tracker, activity tracker, and heart rate monitor, is $139, saving you $60. 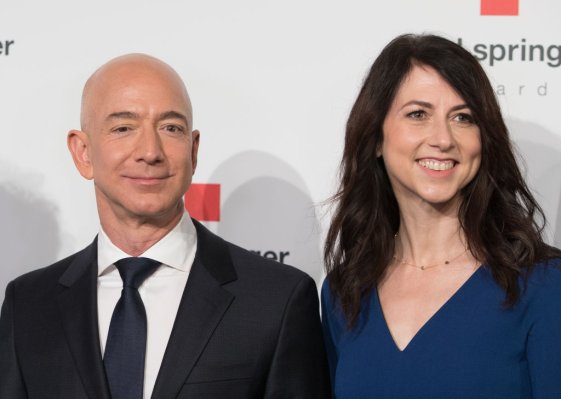 MacKenzie Bezos to Donate at Least Half of Her $37B
Next Up: Editor's Pick