A key question hanging over Benjamin Netanyahu’s re-election campaign is whether he will fulfil an apparent pledge to annex part of the occupied West Bank. But in TIME’s interview with the Israeli Prime Minister, he would not be drawn on the controversial policy — saying only that it might be possible “in the framework of an agreement with the United States.”

Asked directly if he would annex current settlements, Netanyahu said: “It’s something I would like to do in the framework of an agreement with the United States. And it certainly does not do away with the prospect of a political agreement.”

Netanyahu had earlier said he would extend Israeli “sovereignty” over parts of the West Bank, a statement widely interpreted as a pledge to annex a portion of the Palestinian territory Israel has controlled for 52 years. Such a move would fulfill the wishes of many in Netanyahu’s rightwing Likud party and other hardliners who view the swath of land that extends to the Jordan River as part of biblical Israel.

But in his interview with TIME on June 25 Netanyahu attempted to remain ambiguous. “I didn’t actually use the word [annexation], I think,” he said. “I’m not sure if I used that word or the application of Israeli law. There’s a subtle difference between them.” Pressed on whether he intends to legally annex, he said, “we’ll get to that point and I’ll make it clear when we get to that point.”

Almost 3 million Palestinians live in the occupied West Bank, whose Ramallah-based leadership has forsworn violence and whose security apparatus cooperates with Israel’s. A further 2-million Palestinians live in Gaza, controlled by the militant group Hamas. Israel and Egypt have enforced an effective 12-year blockade over the strip since Hamas took over in 2007 and the rockets Hamas’ fires at Israel are often intercepted by the U.S.-funded defense system known as the Iron Dome.

But some Israeli security experts say Netanyahu has strategically sustained the militant group while simultaneously de-legitimizing the Palestinian Authority in order to avoid making compromises that would harm him domestically. Flirting with legal annexation, they claim, is another high risk bid for political survival at a time when it is most at risk.

Former Mossad director Danny Yatom says Netanyahu can point to the instability and violence on the Gaza strip and say “this is the way Palestinians are behaving once they are independent. Do you want us to see the same phenomenon in the West Bank?” Netanyahu “does not want to talk to [Palestinian Authority President Mahmoud Abbas] because he understands that once he will have to sit and negotiate he will have to make concessions,” adds Yatom, who directed Israel’s intelligence and counterterrorism agency between 1996 and 1998.

Netanyahu does not see it that way. In an interview with TIME at his Jerusalem residence, the Prime Minister argued that it was Palestinian recalcitrance that had prevented a resolution to the conflict and accused the international community of “pampering” Abbas. “They were offered everything, just about everything in Camp David in 2000, with President Clinton and the then Prime Minister Barak, and they walked away from that,” he said. “They walk away each time. They walked away with [former Prime Minister Ehud] Olmert. They walked away with Obama when President Obama and John Kerry wanted to propose a framework for negotiations.”

Olmert has called Abbas a “great leader” and claims the two would have reached a peace deal had their talks not been derailed by the legal woes that led Olmert—who was later imprisoned—to resign. Polling shows that about half of Israeli Jews still support a Two State solution to the conflict, but most are deeply skeptical of the ability of talks to deliver peace.

President Trump’s administration has pursued an entirely different strategy. The U.S. has moved its embassy to Jerusalem, cut funds to Palestinian refugees, and endorsed Israeli control of the Golan Heights which, like the West Bank and Gaza, Israel captured during the 1967 War. Negotiations were delegated to Jason Greenblatt, an advocate for Israeli settlements on the West Bank, and to Trump’s son-in-law, Jared Kushner. On June 30, Greenblatt and U.S. ambassador to Israel David Friedman—who has claimed Israel has “the right” to annex some territories in the West Bank—inaugurated a settler archeological project in East Jerusalem, which the Palestinians see as the capital of their future state.

Kushner and Trump’s peace plan “is not meant to work” Husam Zomlot, the head of the Palestinian Mission to the U.K., told TIME following an economic “workshop” presented as the first stage of Jared Kushner’s long delayed Middle East Peace Plan. Its true aim, he said, is “to kill time for Israel to finish off the swallowing and annexing of the Palestinian occupied territories.”

Palestinians see the expansion of Israeli settlements in the occupied territories—which are illegal under international law—as a form of de-facto annexation, reducing the viability of a future Palestinian state. But unilateral annexation of all or part of the West Bank would upend international norms, deliver a mortal blow to the fragile legitimacy of the Ramallah-based leadership, and undermine Israel’s status as a Jewish-Democratic State. Says Yatom, “It will diminish our political posture in the world. We will be treated like South Africa was under the regime of [apartheid].”

According to research commissioned by Commanders for Israel’s Security (CIS), whose members include the majority of Israel’s available security forces generals and directors, annexation would also impose enormous financial and security costs on Israel. If it results in the collapse of Israeli-Palestinian security co-operation, as CIS predicts, experts say the entire standing army as well as mobilized reserves would be required to administer the West Bank, diverting military resources from checking the Lebanon-based militant group Hezbollah, Iran, and its proxy militias in Iraq and Syria.

Netanyahu has a history of making incendiary statements in the run up to elections. In 2015 he mobilized his right wing base by warning that his center left opposition was bringing Arab voters “on buses” to the polls. But some CIS leaders claim the ambiguity of his pre-2019 election comments on Israeli sovereignty in the West Bank was deliberate.

It appeals to hardliners in Israel’s parliament who could bolster his chances of surviving pending corruption indictments, while still leaving enough wiggle room to back away from legal annexation. Extending “sovereignty” could imply also imply taking legislative or administrative steps that reduce the difference between Israelis who live across the Green Line—the demarcation line set out in the 1949 Armistice Agreements—and those who live to the west of it.

Even without formal annexation, Netanyahu’s critics in Israel say his accommodation of settlers and sidelining of the peace process has left the West Bank in a precipitous state and threatens Israeli democracy.

Avner Gvaryahu, a former sergeant of an IDF sniper team, tells TIME that the civil society organization he now directs, called Breaking the Silence, aims to alert Israelis to the reality of “normalized” occupation. It was not so much the occasional incident of theft or destruction of property he says he witnessed that pushed him to question its morality, but the more mundane routine of forcefully entering Palestinian homes. “I’d find myself sitting in someone’s living room, seeing children’s toys or dishes in the sink or photo albums in someone’s house,” he says adding that often the head of the family would sometimes be blindfolded and handcuffed. “If the family wants to use their bathroom or their kitchen they needed permission from me. I think that’s really what hit a chord.”

In an interview in the West Bank city of Hebron, Gvaryahu recalled seeing the hatred his team inspired in younger Palestinians and wondering how their actions were helping Israel.

“The situation is not stable,” says Ami Ayalon, a former director of Israel’s internal security agency Shin Bet and co-founder of Blue White Future, which advocates for a Two State solution to the conflict. Some local polls indicate that about three quarters of Palestinians no longer support the strategy of Abbas, an 83-year old chain smoker who opposed the bloody violence of the Second Intifada, which cost thousands of lives. “I don’t know when it will happen but I know that it will happen,” says Ayalon. “We shall face violence. I see it written on the walls in Arabic, in Hebrew and in English. We just have to read it.” 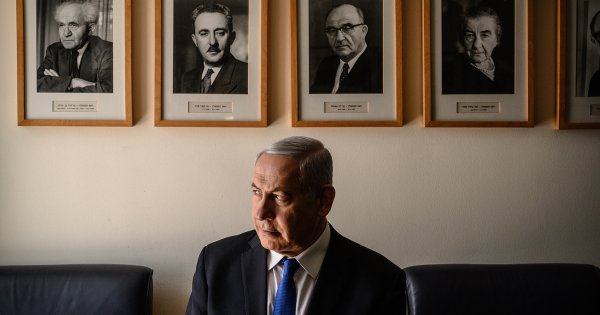 'Only the Strong Survive.' How Israel's Benjamin Netanyahu Is Testing the Limits of Power
Next Up: Editor's Pick