The Greek Election Brings Hope for a Country in Need

Newly-elected Prime Minister Kyriakos Mitsotakis waves as he speaks outside the New Democracy party headquarters after winning the general election on July 7 in Athens, Greece.
Alkis Konstantinidis—Reuters
By Ian Bremmer

In Greece, the mainstream has returned to power and the populists are in retreat. Prime Minister Kyriakos Mitsotakis promised that the country would “proudly raise its head again,” and Greek voters have given him a robust election victory.

The new Prime Minister has his work cut out for him. The country’s outlook has improved following an agonizingly prolonged economic depression that destroyed a quarter of Greece’s economy, but more than 30% of its citizens remain trapped in poverty and unemployment remains at 18%. It’s worse for young people. Nearly 40% lack jobs, and the best and brightest continue to leave the country.

Lenders have cheered Mitsotakis’ victory and the return of his business-friendly New Democracy party–and the exit of the leftist Syriza government it replaces. Mitsotakis says he will renegotiate Greece’s commitment to keep an annual budget surplus and to speed privatization of many public services in order to lower taxes and “jump-start” economic growth.

The election outcome also surely pleases European leaders. New Democracy is much less likely than Syriza to provoke another economic crisis, an emergency the Europeans probably would not handle well now that an immigration crisis has undermined the E.U.’s political consensus and German Chancellor Angela Merkel no longer has the political capital to broker a credible deal.

Mitsotakis’ victory gives him a strong political mandate. New Democracy won about 40% of the vote, but Greek election law provides a 50-seat bonus in Parliament for the political party that finishes in first place. That gives the new Prime Minister the outright majority he will need to move his agenda forward. In addition, Mitsotakis, the son of former Prime Minister Konstantinos Mitsotakis, is a capable technocrat, a person whose formative experience is as a consultant for McKinsey rather than as a maker of unkeepable promises like his predecessor, outgoing PM Alexis Tsipras.

Yet Mitsotakis will have to deliver fairly quickly if he’s to maintain the momentum his victory has given him. Voter turnout was just 57%, one of the lowest rates in decades. It will be many years before Greece can restore genuine normality by fully repaying the $330 billion it has borrowed from the E.U. and the International Monetary Fund.

Meanwhile, Syriza, which won more than 30% of the vote, has returned to opposition. Free of responsibility for avoiding economic catastrophe, it can again level unfair criticism on those who’ve now taken up these burdens. Greece may also face a return of the protests that plagued the last New Democracy–led government and inflicted millions of dollars of property damage in Athens.

Future governments will probably be more fractious than this one. In 2016, the Syriza government abolished the 50-seat bonus that has given Mitsotakis his current parliamentary majority. (The new law did not apply to this election but will to those that follow.) That adds an element of urgency to Mitsotakis’ bid to bring change. If he fails, even if he wins the next election, he’s more likely to need a coalition partner to form a government, a partner that will make demands that may make it harder to pursue his agenda.

For now, Greeks are justly optimistic that things will get better. But they are far from out of the woods, and the Prime Minister will surely find that winning was the easy part. 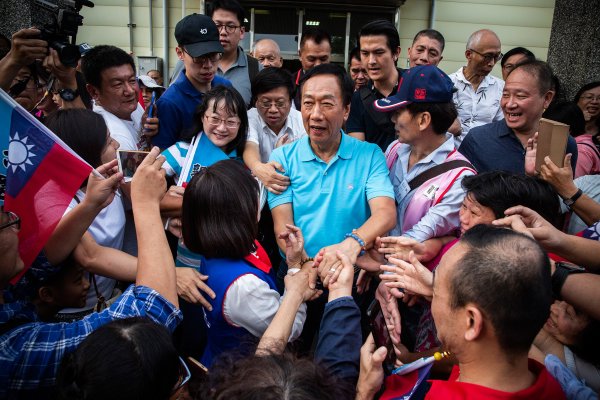 Foxconn Founder Terry Gou Wants to be Taiwan’s President—and a Go-Between for U.S. and China
Next Up: Editor's Pick