By Tessa Berenson and Mahita Gajanan

Embattled Labor Secretary Alex Acosta defended his role in handling Jeffrey Epstein’s plea deal negotiations as the U.S. Attorney in South Florida in 2008, saying that “facts are being overlooked” and he acted to make sure Epstein didn’t “walk free.”

“The Palm Beach State Attorney’s Office was ready to let Epstein walk free,” Acosta said at a press conference on July 10. “No jail time, nothing. Prosecutors in my former office found this to be completely unacceptable, and they became involved.”

Acosta said it was the judgment of his office at the time that they should reach an agreement with Epstein because a trial would be a “roll of the dice.” These cases “require a prosecutor to ask whether a plea that guarantees jail time and guarantees registration, to ask whether that plea versus going to trial, how you weigh those two, if going to trial is viewed as the roll of the dice,” Acosta said. “The goal here was straightforward. Put Epstein behind bars, ensure he was registered as a sexual offender, provide victims with the means to seek restitution, and protect the public by putting them on notice that a sexual predator was in their midst.”

“He needed to go to jail,” Acosta said. “That was the focus.”

Acosta’s handling of the case has come under scrutiny again following Epstein’s arrest Saturday on sex trafficking and conspiracy charges. Epstein, 66, is accused of luring girls into his homes in both New York and Palm Beach, Fla. for “massages” that he would quickly escalate into sexually abusive situations over the four-year period between 2002 and 2005.

The allegations in the case are similar in nature to the ones Acosta investigated as U.S. Attorney for South Florida. Epstein was accused of sexually abusing dozens of underage girls in his Palm Beach home, but he pleaded guilty to just two counts of soliciting prostitution from a minor, and served just 13 months of his 18-month sentence. Acosta allowed Epstein to plead guilty to state charges that he solicited prostitution from girls younger than 18, setting aside a 53-page federal indictment written in 2007.

Read more: Here’s What to Know About the Sex Trafficking Case Against Jeffrey Epstein

But President Donald Trump— who knew Epstein, and told New York magazine in 2002 that Epstein “likes beautiful women as much as I do, and many of them are on the younger side”— defended his Labor Secretary. “I feel very badly, actually, for Secretary Acosta,” Trump said Tuesday. “He’s been a really great Secretary of Labor. The rest of it we’ll have to look at very carefully.”

Acosta said Wednesday that his relationship with the President is “outstanding.” When asked if he has any regrets about his handling of Epstein’s case in Florida, Acosta said, “We believe that we proceeded appropriately.” He added: “No regrets is a very hard question.” 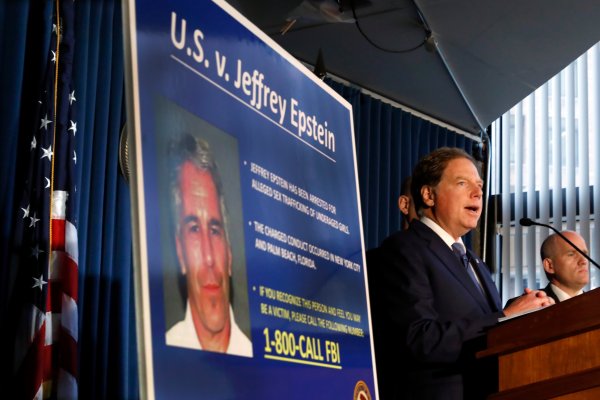 Jeffrey Epstein's Sex Trafficking Case: What to Know
Next Up: Editor's Pick