Medical staff dressed in protective gear before entering an isolation area at an Ebola treatment centre in Goma.
SOPA Images—LightRocket via Getty Images
By Jamie Ducharme

A humanitarian crisis, attacks on health workers and rampant misinformation have for months fueled an Ebola outbreak in the Democratic Republic of the Congo (DRC), amplifying the effects of a highly contagious and often-fatal disease. As a result, international health groups have declared this the second-worst Ebola outbreak in history, with more than 1,500 people dying since it started in August 2018.

New research from the U.S. Centers for Disease Control and Prevention (CDC) offers some hope, highlighting two treatments that could help bring the deadly outbreak under control.

The study, published in the Lancet Infectious Diseases, finds that two experimental Ebola treatments—Gilead Sciences’ antiviral drug remdesivir, and antibodies included in a Mapp Biopharmaceutical cocktail known as ZMapp—were shown in a lab to slow the viral strain found in the DRC, potentially offering an effective treatment to those who become infected with the hemorrhagic fever.

There is no known cure for Ebola. There are some treatments available, but all were “developed to fight Ebola viruses from previous outbreaks,” lead study author and CDC microbiologist Laura McMullan said in a statement. “It’s vitally important to make sure existing treatments work against the virus that’s making people sick now.”

CDC researchers isolated and recreated the specific viral strain circulating in the DRC, which is known as the Ituri strain, and studied its activity in human cells in a secure laboratory. This allowed them to compare the Ituri strain to past forms of Ebola, and to test treatments with a high degree of specificity. They also confirmed that diagnostic tests currently in use in the DRC can accurately detect Ebola.

While remdesivir and ZMapp could offer relief to those who are already sick with Ebola, a vaccine made by Merck is also showing promise at preventing transmission in the first place.

Merck’s vaccine is still experimental and has not yet been approved by government agencies, but it has been used in the DRC under “compassionate use” rules, which allow drugs under investigation to be used in the absence of other options. World Health Organization data suggest the vaccine has about a 97.5% efficacy rate. A 2016 trial conducted in Guinea, one of the countries ravaged by Ebola during a West African outbreak that killed more than 11,000 people from 2014 to 2016, also suggested the vaccine could effectively prevent infection.

The DRC outbreak has yet to reach that scale, but its continuing intensity and recent presence in neighboring Uganda—and the sociopolitical challenges that have hampered response efforts—have health officials worried. The CDC says its results “support the continued testing of remdesivir and ZMapp in DR Congo,” which could, at least, offer some help. 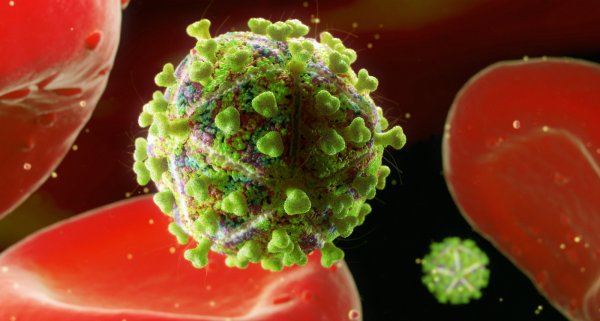 For the First Time, Researchers Eliminated HIV From the Genomes of Living Animals
Next Up: Editor's Pick