In a Wednesday interview with NBC News, Jennifer Araoz became the latest victim to speak publicly about being sexually assaulted by billionaire Jeffrey Epstein.

She alleged she was first recruited into Epstein’s alleged sex trafficking network by a woman outside of her New York City high school when she was 14 years old. Aroaz says the unidentified woman approached her several times, and eventually said that Epstein could help her launch her dream Broadway career.

Araoz, now 32, did not come forward to police or prosecutors when charges were first brought against Epstein in 2007, but now intends to file a lawsuit.

“He hurt me badly,” Araoz said “This is one way for me to get justice.”

Aroaz said her first few encounters with Epstein and the woman at Epstein’s home were friendly — they talked, she was given wine and $300 after every visit. Eventually she began meeting with Epstein alone, and that’s when the sexual abuse began, she alleges.

Araoz told NBC’s Savannah Guthrie she was given $300 after performing “massages” at Epstein’s home, which she said happened once or twice a week. She detailed stripping down to her underwear and massaging him at 14 years old, and says Epstein was aware of her age. The visits would end after Epstein pleasured himself in front of her. When Araoz was 15, she said Epstein held her down and raped her, and she never visited him again afterwards.

“I was terrified and I was telling him to stop, ‘please stop,'” Araoz said.

She said as a 15-year-old she didn’t recognize the assault as rape, because she blamed herself. She told Guthrie that she left her school after the rape because of how close it was to Epstein’s home.

“I was obligated, like that’s just what you’re supposed to do. So I really did not know better,” she said. Araoz said she suffered from depression, anxiety and panic attacks for years after the assault. NBC reports Araoz later confided in her mother, two close friends and her boyfriend at the time about her encounters with Epstein. (And the network confirmed with these four people that Araoz had told them of the incidents between 10 and 6 years ago.)

Epstein was arrested in New York City on Monday on two counts of sex trafficking of minors between 2002 through at least 2005.

Epstein faced similar charges in 2007 involving allegations by multiple victims, but accepted a plea deal in Florida in which he pleaded guilty to two charges of prostitution and was sentenced to 13 months jail time — of which six out of seven days he was able to leave jail to work. He received immunity from federal criminal charges, and the deal was kept from the victims who had come forward at the time. It was struck with the help of now secretary of Labor Alexander Acosta, who was a federal prosecutor in Miami at the time. Members of Congress are now calling for Acosta’s resignation or termination, though he reportedly is not expected to step down voluntarily.

The new case has also reignited questions about President Donald Trump’s longtime friendship with Epstein, who has also been linked to former president Bill Clinton and Prince Andrew, the second son of Queen Elizabeth, among others. On Tuesday Trump addressed a question by a reporter about their friendship, to which he said he “knew him like everybody in Palm Beach knew him…I had a falling out with him. I haven’t spoken to him in 15 years. I was not a fan of his, that I can tell you.”

Back in 2002, Trump told New York Magazine, “I’ve known Jeff for fifteen years. Terrific guy…He’s a lot of fun to be with. It is even said that he likes beautiful women as much as I do, and many of them are on the younger side. No doubt about it – Jeffrey enjoys his social life.”

Clinton issued a statement on Monday via his press secretary, stating “President Clinton knows nothing about the terrible crimes Jeffrey Epstein pleaded guilty to in Florida some years ago, or those with which he has been recently charged in New York.” Clinton hasn’t spoken to Epstein in over a decade, according to the statement.

On Tuesday Trump also defended Acosta, saying “What I do know is he’s been a great, really great secretary of labor, the rest of it we’ll have to look at it very carefully, but you’re talking about a long time ago.” 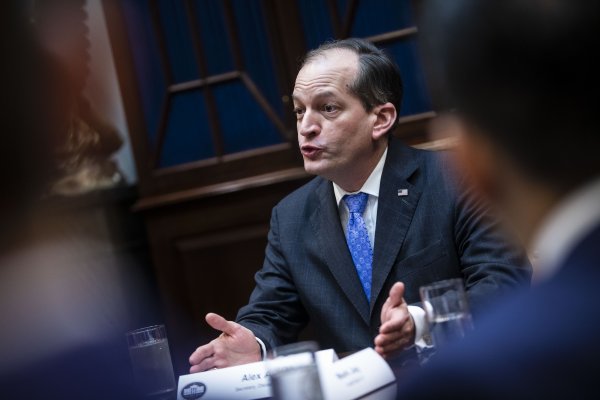 How #MeToo Helped Lead to New Charges Against Epstein
Next Up: Editor's Pick