For Donald Trump, Courts Are Another 2020 Battleground

Donald Trump’s decision to release a shortlist of potential Supreme Court nominees in the 2016 election for a seat held open by Senate Republicans helped persuade many conservatives to support his campaign. As he heads into re-election, he is again seeking to turn federal courts into a hot topic.

In recent days, Trump has broken with Department of Justice tradition in an attempt to relitigate a decision on the Census, thrown his support behind a longshot lawsuit attempting to overturn the Affordable Care Act and taken to Twitter to criticize Supreme Court justices who have ruled against him.

“I have long heard that the appointment of Supreme Court Justices is a President’s most important decision,” Trump tweeted. “SO TRUE!”

Trump has tangled with courts since his days as a New York real estate mogul, facing 4,095 lawsuits over three decades in business. During the 2016 campaign, he shocked the legal establishment with attacks on a U.S. District Court judge presiding over class-action lawsuits over fraud at Trump University over his ethnicity and baseless speculation that Supreme Court Justice Antonin Scalia was murdered.

That’s continued into his presidency, with high-stakes fights over a travel ban on several majority Muslim countries, his involvement with the Trump International Hotel in Washington and his attempt to end the Deferred Action for Childhood Arrivals program for undocumented immigrants. He’s also feuded with Chief Justice John Roberts over whether he should refer to appointees as “Obama judges.”

As he seeks a second term in the White House, Trump has sought to turn these legal tangles into a bonus, painting the courts as an obstacle to his agenda.

“He’s playing to his base,” says Jessica Levinson, a professor at Loyola Law School. “He is trying to style any judge who doesn’t agree with him as a dangerous, un-elected individual who is wielding too much power.”

The most recent fight comes after Trump has already lost at the Supreme Court, typically a point where his predecessors would concede defeat and move on.

In June, the Supreme Court blocked the Trump Administration from adding a citizenship question to the Census, with Roberts joining the four liberal justices in the key part of the decision. Despite the ruling, Trump and Attorney General William Barr have continued trying to find a way to include the question, even making the highly unusual move of completely replacing the legal team defending the Administration’s efforts.

For some, that’s a sign that Trump is pushing the boundaries too far.

But Trump’s political team is betting that continuing the fight is worth it.

“Most Americans agree with President Trump that asking if people are citizens just makes sense,” Sarah Matthews, the campaign’s deputy press secretary, told TIME when asked how the campaign thinks voters will respond to the Census fight. “Democrats opposing this want to open our borders to anyone who wants to come into the country, and now they don’t even want to know who’s already here.”

The other high-profile fight Trump is picking with the Supreme Court is over the Affordable Care Act, which could prove these court challenges are a double-edged political sword for the president. In 2012, the Supreme Court upheld the law’s individual mandate in a landmark ruling that was also a 5-4 decision led by Roberts and the four liberal justices. (Roberts’ role in both of these decisions seemed to be a subtext of Trump’s anger in his Tuesday morning tweets.)

But President Barack Obama’s signature health care law, which Trump called Tuesday “expensive & pathetic,” could once again come before the nation’s highest court. A federal appeals court in New Orleans will hear arguments Tuesday about whether a federal judge in Texas was correct in striking down the Affordable Care Act — a decision Trump cheered.

Depending on what the appeals court decides, and whether the case works its way up to the Supreme Court before the 2020 election, Trump could face some political risks. If Obamacare is struck down, or even if his government just needs to appear in court fighting to overturn a law that protects people with preexisting conditions and currently gives tens of millions of people health insurance, he might own the political fallout of Americans worried about losing their health insurance.

Protect Our Care, a group that supports the law, began running a digital ad that says in part, “President Trump and Republicans are in court this week to strike down our health care laws and rip away coverage from millions of Americans… This is Donald Trump’s health care plan.”

“Two years after trying & failing to repeal the Affordable Care Act through Congress, Pres. Trump is now trying to destroy the law through the courts,” tweeted Illinois Sen. Dick Durbin, one of the top Democrats in the Senate. “If the GOP has their way, millions of Americans will lose their health coverage.”

But Trump’s 2016 experience seemed to show that fighting with judges worked. After Scalia died in February of 2016, Trump, in consultation with conservative legal advisors and with the support of Senate Majority Leader Mitch McConnell, made an unprecedented pact with voters: He released a list of judges and promised to nominate someone from that list to fill Scalia’s seat. National exit polls showed that 21% of voters said the Supreme Court appointment was “the most important factor” in their decision, and those voters strongly favored Trump. Many in Trump’s orbit credit his list with sealing his 2016 victory, and some political experts think his continued emphasis on the court will continue to boost him. “Right-leaning voters care more about the Supreme Court than left-leaning voters, which gives Trump a major advantage in 2020 – even amongst conservative voters who otherwise hate him,” tweeted Republican pollster Frank Luntz.

Now, heading into 2020, Trump “will use the court as a foil, the same way conservatives used to rail against the Warren Court in the 1960s,” says Julian Zelizer, professor of history and public affairs at Princeton University. But, Zelizer notes, “His rhetoric is much more pointed than previous presidents.” 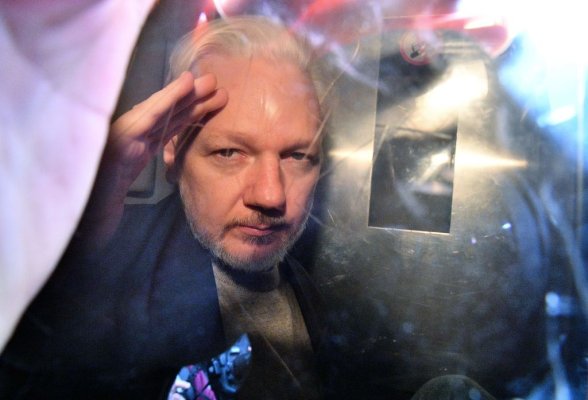 Prosecutors' Aggressive Pursuit of Julian Assange May Make It Harder to Extradite Him
Next Up: Editor's Pick