Demonstrators in Hong Kong hold anti-government placards and chant slogans during a march on July 1, 2019.
Miguel Candela/SOPA Images/LightRocket via Getty Images
Ideas
By Christine Loh
Christine Loh is chief development strategist at Hong Kong University of Science and Technology’s Institute for the Environment.

Hong Kong has a longstanding, admirable protest culture that is peaceful, but recent acts of vandalism have jolted the city. Having let off steam through orderly means on the one hand, and through violent means on the other hand, Hong Kong needs to ready itself for reflection on its predicament.

The people of this city can peacefully protest in enormous numbers—ranging from tens and hundreds of thousands to two million—because they are pragmatic and gentle souls. The local protest culture represents global best practice in how to vent frustration in an impressively large but peaceful fashion.

The big marches usually start after lunch on full stomachs. Despite fierce heat and humidity, people remain unfailingly patient—waiting for hours before moving along the well-trodden path from Victoria Park to government headquarters, because of the sheer size of the crowd. Shops stay open yet nothing is trashed along the way.

Organizers need a permit from the police to demonstrate. The cooperative role of the police has been crucial to the development of Hong Kong’s protest culture. Permits are seldom denied because a part of the city’s shared political core values is the freedom of expression. Ordinary folk feel safe to join in; and the police ensure public safety through well-practiced crowd control and traffic diversions.

Hong Kong people may be frustrated but there has never been much appetite for instability and disruptions. They have too much to lose by upsetting the socio-economic applecart.

The vandalism of the Legislative Council building on July 1 was an exception and marred Hong Kong’s otherwise peaceful protest record. While some half a million marched along the usual route without incident, a small group besieged the complex for hours before finally breaking through and then wrecking the meeting chamber with media cameras beaming the destruction for the world to see.

The trigger to both strands of protest was the Hong Kong government’s controversial extradition bill that would allow case-by-case renditions of alleged fugitive offenders from Hong Kong to other jurisdictions, including the Chinese mainland. The now suspended bill was a lightning rod that electrified Hong Kong people’s many anxieties—from relations with mainland China to local socio-economic problems ranging from land and housing supply to advancement for youth—and the July 1 march followed a row of big demonstrations in close succession.

Hong Kong got a new sovereign power in 1997, when it ceased to be a British colony and became a Special Administrative Region of the People’s Republic of China. But the real transition is still on-going.

China has changed immensely since 1984, when the Sino-British Joint Declaration was signed and Britain agreed to hand Hong Kong back to China 13 years later. This tiny city’s GDP was more than 30 percent of China’s in the early 1980s. By 1997, it’s GDP was still around 20 percent of the size of the nation’s economy. Today, it is less than 3 percent; and the size of neighboring Shenzhen’s economy surpassed Hong Kong’s in 2018.

Hong Kong is fortunate to have such a big, growing hinterland but the rise of China makes people feel relatively less significant than before; and they worry they might have lost their mojo when there is plenty of hungry talent just next door. This is, in fact, not just Hong Kong’s concern. China’s rise has spooked other places too.

In their hearts, Hong Kong people know they have to reconcile with being a part of the People’s Republic but dealing with it has not been easy. There are major changes associated with Hong Kong’s post-1997 right to operate a separate legal and political system within China—a formula known as “One Country, Two Systems.” China’s experiment of allowing a free-wheeling capitalist enclave to exist inside its much bigger socialist system was based on a belief that, over time, as its own economic reforms take root, differences would narrow. It could be argued there are many aspects of this experiment that are positive.

Nevertheless, the protests over the extradition bill showed that deep fault lines still exist between the two systems, especially among youth. They have become highly politicized, and along with them, their parents too. It begun over how schools should teach civic education in 2012, and continued in 2014 through the Umbrella Movement—a 79-day street occupation to call for electoral reform. The extradition bill re-opened unsettled matters.

Hong Kong people want a more democratic system but they can also see it is not a full solution to solving problems. They are disappointed with the establishment and opposition political elites, who have not been able to provide inspiring leadership.

The territory needs to have a deep dialogue of reconciliation in order to move forward within One Country. Beijing needs to allow it because it needs to hear the concerns of Hong Kong people, including the desire for greater democracy and respect for personal freedoms.

The political elites need to listen, too, if they want the stability that undergirds Hong Kong’s prosperity. Grandstanding and finger-pointing at each other won’t solve problems. To accept that they are part of the problem might just make them better leaders. The mark of true leadership is whether it can transform a crisis into an opportunity that serves a wider cause.

Young activists are going to be tested. Can they, too, listen to others and reflect the interests of the entire community? The precondition to deliberation and reconciliation is to listen first before firing off insults and repeatedly asserting positions.

The mark of a civilized society is to be able to listen to people who disagree with you and not allow the disagreements to destroy goodwill. Hong Kong has much going for it. One Country, Two Systems has worked, albeit with some rough edges.

The people of Hong Kong have always been reasonable and pragmatic. Their best practice in public protest shows that if anyone has the capacity to overcome political challenges, they do. 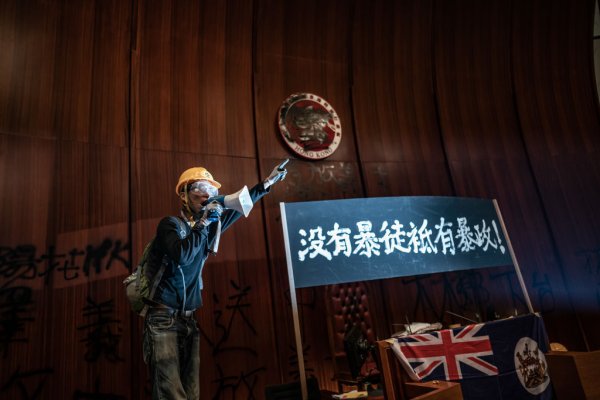 Hong Kong's Rebels Stake Everything on Their Struggle
Next Up: Editor's Pick